S&P 500 bulls made a good run, but didn't deal with the bearish outcome looming, The renewed tightening bets spurred by strong headline NFPs figure, will take their toll on risk-on assets that had been driving Friday's run. Bets on another 75bp hike in Sep have increased dramatically, practically proving Daly or Kashkari right in that the Fed isn't done yet or even close to the Fed funds rate to really get inflation down. While they claim that 2% is doable and soft landing within reach, the progression from 9% downwards just doesn't go fast like that. At best (repeating myself for months here), they would get to 5-6% CPI, which means a tough Sep and one more FOMC still this year. Combined with balnce sheet shrinking projections, that would take a great toll on the real economy – one that is being softened by the still very expansive fiscal policy.

Let's look around the world (apart from the troubles in Europe and Asia such as shown in JPY weakness), many other central banks are tightening, Latin America is also tightening. It's not only UK and the implications discussed on Friday:

(…) Let's have a look at yesterday's Bank of England moves, kind of foreshadowing what's reasonable to expect from the Fed. In the UK, the prospect of entering recession Q4 2022 amd remaining in it for more than a couple of quarters, is being acknowledged. The central bank though intends to keep tightening anyway, preferring to take on inflation after it ran out of control longer they publicly anticipated. Meanwhile in the States, unemployment claims have edged higher – indicative of growing softness in the labor market.

Long-dated Treasuries continue rising as is appropriate in these conditions of economic slowdown slowly gathering pace. Similarly to inflation expectations, they're not yet taking the Fed's hawkish rhetoric absolutely seriously unlike commodity prices that are at best carving out a bullish divergence (still in the making, therefore without implications yet). Precious metals appear farther along the route of acknowledging the upcoming stagflationary reality as I continue looking for inflation to remain in the stubbornly high 5-6% range no matter the Fed's actions over the next 3 FOMC meetings at least. Obviously, the hotter the underlying markets, the more tightening has to be done, and that's extra headwind for the markets, and one making the Fed pivot a bit more elusive.

The key thing that has changed from the above, is the turn in yields – Treasuries would have a harder time rising now, but given that I expect better CPI on Wednesday (oil is down and hasn't bottomed yet etc), yields should retreat in what I look to be a positive market reaction – one of hoping that the Fed wouldn't tighten that much as is feared today they would. This wouldn't however save the stock market bulls.

Consider though as well where the Fed funds rate is now, and how far above 3% Powell can take it. He will try, sure, but even 4% in our debt based economy would prove bridge too far when it comes to any soft landing (stating the very obvious). Back during the last successful one (mid 1990s), we were going through genuinely positive tech revolution that helped cushion restrictive monetary policy – these macro implications for productivity growth don't apply now.

To feel the daily pulse, let's move right into the charts (all courtesy of www.stockcharts.com) – today's full scale article features good 6 ones, with more thoughts for premium subscribers. 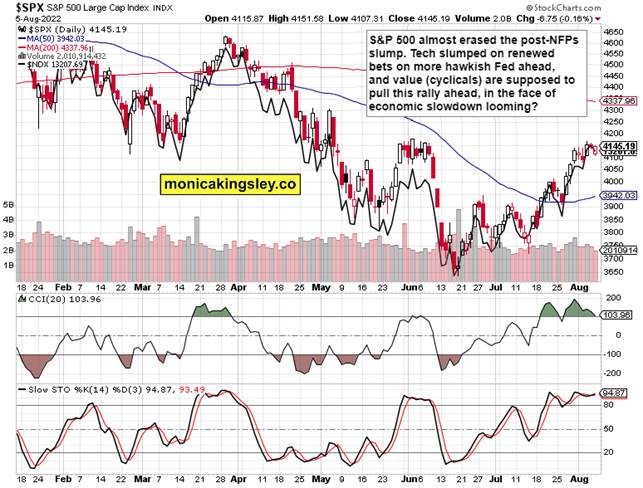 S&P 500 is clinging by the finernails, and the only question remains whether we have a few dozen points still to go on the upside to reach even more excessive bullishness, or whether the slow grind lower is assuming the reins from here. The bull trap is almost complete.

HYG is going to attract a sell in the not too distant future – more so than it did on Friday. The opening gap was more than half closed, but this isn't going to last. All it takes to bring junk bonds down, is more conviction about the Fed's hawkish path ahead.

Precious metals aren't selling too hard on the turn towards anticipating tougher tightening ahead. With hikes to be paused after Sep for a while, the metals would have an easier time before that FOMC day in Sep. Next week's CPI will have a short-term effect only – the consequences of recognizing inflation as sticky no matter what the Fed has done already, would be greater. This moment awaits still. 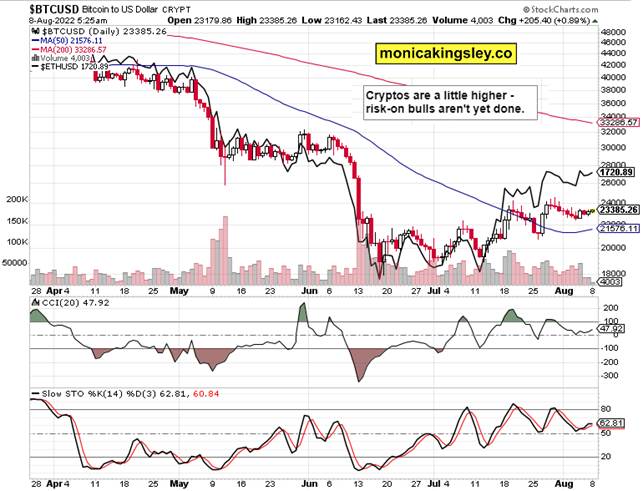 Cryptos are slightly up, which bodes well for risk taking. Not expecting huge gains today here or in SPX, but a reversal of Friday's setback.

Thank you for having read today's free analysis, which is a small part of the premium Monica's Trading Signals covering all the markets you're used to (stocks, bonds, gold, silver, oil, copper, cryptos), and of the premium Monica's Stock Signals presenting stocks and bonds only. Both publications feature real-time trade calls and intraday updates. While at my homesite, you can subscribe to the free Monica's Insider Club for instant publishing notifications and other content useful for making your own trade moves. Thanks for subscribing & all your support that makes this endeavor possible!