Gold repressed back below resistance

Admittedly, (or perhaps more protectively stated "arguably"), fueling Gold's price demise was our recklessly penning a week ago that "...if contract volume stays on a diet [which it has], near-term we can see price loss back to 1790 and [for Silver] sub-20 ..."

'Course price was flogged far further to as low as 1759 yesterday (Friday), Gold settling out the week at 1760. Worse still for Silver, with her price north of 20 early Wednesday but also with her "Baby Blues" of regression trend consistency having turned south, we wrote in the day's Prescient Commentary "...19-dead is not out of range given the typical follow-through of this measure...". Dead indeed, Silver trading down to 18.93 yesterday. Going forward, probably our best course of action to benefit the precious metals is simply to shut up.

Either way, shut down was the price of Gold this past week, sufficiently so that the 1760 settle is below the 1779-1854 resistance zone. That is not good in the minds of the pure technicians who can in turn opine a retest is in order of the year's low at 1678. 'Course, the fundamentalists roll their eyes given Gold's opening Scoreboard valuation is at present 4015, rebuking any 1678 notion as pure poppycock. But be it lack of ownership interest, the evility of the "M word" crowd, and/or ignorance of currency worthlessness, the market is never wrong, this year's earlier support band (below in yellow) remaining transformed into resistance:

Level-headedly, 'tis too soon to say by Gold's weekly bars that the young parabolic Long trend is [as yet] in jeopardy. But toward maintaining perspective, year-to-date for Gold's 15 down weeks, this past one ranks fourth-worst (-3.2%, thank you Dollar dear); 'tis not that which we wish to see within such Long trend:

Squire, Gold these past ten years has been a "dip-buyer's dream"; the problem is: there are no buyers. After all, why own a heavy lump of hardly mobile metal when instead you can be "In with the in crowd"--[Dobie Gray, '65] by donating your hard-earned savings to such sexy elite equities as Coinbase, Bed Bath and Beyond, and The RealReal (whatever the hell that is). Alive and well is the Investing Age of Stoopid:

Uh, correction mate. Your stocks "were" so up, "if" this past Tuesday's S&P 4325 high marks the end of the counter-trend ascent within the broader descent to at least retest the Index's 3600-3200 support zone. With the S&P priced today at 4228 and Q2 Earnings Season having just yesterday concluded:

■ The Index's yield is 1.516% versus the Five-Year T-Note's 3.116% (and the latter suffers no monetary loss at maturity ... unless the U.S. Treasury defaults, which would likely close global markets indefinitely); and

■ The StateSide economy continues to sputter:

Oh to be sure, there were a couple of economic bright spots for the Baro this past week: August's Philly Fed Index swung from shrinkage to growth, and Industrial Production after being flat for June rose in July. But too, there were the dim bulbs: August's New York State Empire Index suffered its second-worst negative swing in the reading's 19-year history; four key housing measures declined' and July's headline Retail Sales were growthless. As well by "consensus", next week's set of 10 incoming Econ Baro metrics are on balance "expected" to be worse. Maybe the "recession" -- which was officially recognized after six months of existence, only to then be established as non-existent a week later -- still exists. "Got Gold?" (Apparently nobody in the aforementioned Investing Age does... yet...)

Still, illogically flying in the face of such economic reality, "Fed Officials See Need for Continued Rate Increases, but Less Certainty Over Destination" proclaimed Dow Jones Newswires following last Wednesday's release of the Federal Open Market Committee's Minutes to their 26-27 July meeting. Still, the "good news" (if you'll allow) gleaned from the Minutes is the Federal Reserve's facing operating at a loss, which as you know for a private entity (as is the Fed) can lead to bankruptcy. (Just something about which to muse...)

Certainly not amusing was S&P reporting last Tuesday Experian's Consumer Credit Default Indices having risen for the eighth straight month, and moreover that defaults for first mortgages accelerated at the fastest rate since those during September 2020 when the Perma-Virus was in full swing.

Speaking of which, rising COVID cases combined with declining economic data in the PRC elicited a cut in the lending rate from the People's Bank of China. But across the Sea of Japan, the latter's economy firmed in Q2, 'tis said to "pre-pandemic size". Still, with winter right 'round the bend and the CCC ("COVID Control Crowd") rubbing their raison d'être hands together, we'll see... Then there's Europe, where as long as each person's multi-month vacation weather stays pat, nobody gives a derrière du rat.

Obviously not staying pat are Gold's "Baby Blues" of trend consistency as we next see on the left across the three months of daily bars: when the Blues bust +80% as they did last Wednesday, price's rule is bye-bye. And as for the 10-day Market Profile on the right, when the lowest volume participation bar is white, you know 'tis at least a two-week closing low: 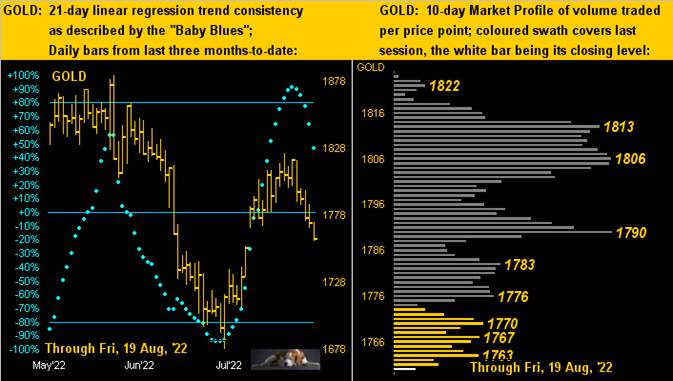 Further as has been the case for recent months, Silver's like graphic looks pretty much the same as that for Gold. Earlier we pointed to the fallout of her own "Baby Blues" (below left) with yesterday's settle all but at the bottom of her Profile (below right): 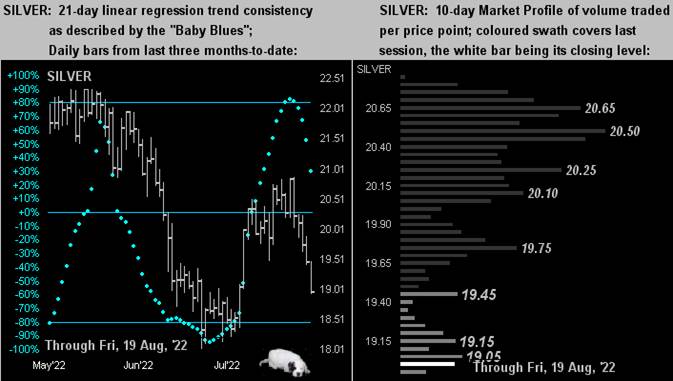 To close it out amidst August's Dog Days for this week, we've three curiosities:

■ 'Twas widely reported last Tuesday that Q2 Earnings Results for Walmart "relieved fears". As we keep a running tally of such results, we decided to check. And oh my, they were worse than that recorded for Q2 a year ago. "But they did beat estimates, mmb..." (Tongue-in-cheek there is our man Squire...);

■ Then came this from the "Earnings Don't Matter Anymore Dept." As reported by the FinTimes: "Quant funds support market rally by ramping up bets on US stocks". Did we earlier mention that alive and well is the Investing Age of Stoopid?

■ But it gets even worse, DJNR running this past Thursday with "Wall Street Bets the Fed Is Bluffing in High-Stakes Inflation Game", i.e. the Fed keeps talkin' the hawk but shan't be able to walk said talk. Central Bank integrity? Gone. (No surprise there).

However: don't you get surprised; instead, get some Gold! And neither forget what... 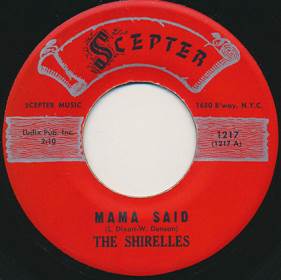