A lack of upside momentum as the markets fear rising rates 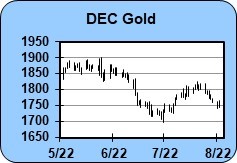 While the gold market did not make a fresh high for the move overnight, prices have managed to consolidate above $1,750 and sit just under this week's highs. Similarly, the silver market has extended a sideways consolidation around $19.00 and forged a quasi-double low starting at $18.65. However, money continues to drain from gold and silver ETF holdings, with gold seeing a substantial outflow of 145,509 ounces and silver an outflow yesterday of 1 million ounces. Surprisingly, gold mining shares jumped yesterday along with gold futures prices, which suggest investor sentiment is not completely negative. Despite a new contract high and sharp downside failure in the Dollar Index yesterday, the uptrend from a fundamental perspective shows no sign of moderating. Economic uncertainty in Europe from the ongoing war and talk of OPEC+ output reductions appear to have increased the appeal of US instruments, which should pull even more money into the dollar. With gold and silver failing to benefit from obvious flight to quality conditions over the past eight months, we are hesitant to suggest traders get long those markets. If flight to quality interest was the source of yesterday's rally in gold, that should have been confirmed by an influx of money into ETF holdings yesterday, but it was not. Unfortunately for the bull camp, the flight to quality buying arguments is not justified by a single day of strong upside action. October gold did respect the Monday low yesterday, and the slide off the mid-month high did not produce the increase in trading volume that is usually the case when fundamental value has been found. We prefer to sell a rally in October gold up to a 6-month-old downtrend channel resistance line of $1,797.75, with that short entry price falling to $1,792.85 on Friday. Clearly, the silver market did not benefit as much as gold from yesterday's rally, which we attribute to a distinct pattern of falling ETF holdings. We prefer to sell September silver on a return to a downtrend channel resistance line drawn from the April and August highs up at $20.37 today and falling to $20.23 by Friday.

Clearly the palladium market fully discounted a Russian prediction of a shortage of 80,000 to 100,000 ounces by the end of the year, as the market was unable to hold in positive ground yesterday. According to an independent Russian analyst, demand for palladium is likely to decline in the second half, but lost production is likely to reduce supply by a greater magnitude. The Russian analyst also predicted the 2023 global palladium market deficit to expand to 130,000 to 150,000 ounces. In the near term, the palladium market is uninterested in the "potential" tightness far in the future and instead is being undermined by deteriorating near-term economic sentiment. Unreliable support in September palladium is $1,947. The outlook for the platinum market also remains bearish from the charts and largely neutral from the fundamental perspective. While the platinum market has not been confronted with specific forecasts of slumping global auto sales, the deterioration in global economic sentiment suggests soft vehicle sales forecasts are likely to be forthcoming. Earlier this week, Commerzbank cut their year-end price forecast for platinum by $50 per ounce off what we assume to be a reduction in physical consumption estimates. Unreliable support in October platinum is $855.60.

MARKET IDEAS: Those looking to get short gold and silver should allow the market to correct the oversold condition from the mid-August high to low washout of $75 in October gold and $2.15 in September silver. We prefer to sell September silver on a return to a downtrend channel resistance line drawn from the April and August highs up at $20.37 today, with that resistance/sell level falling to $20.23 on Friday. 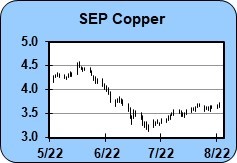 Surprisingly, the September copper contract broke out to its highest level since June 30 yesterday and managed that strength in the face of noted losses in equities, a temporary upside breakout in US Treasury yields, and a fresh contract high in the US dollar. The market was not knocked back despite bearish Goldman Sachs 3-month, 6-month, and 12-month price forecasts. They were bullish toward copper from midyear 2023 on, indicating that the global structural deficit will not be repaired by then. From a technical perspective, the bull camp is emboldened by a slight adjustment higher in trading volume over the last four trading sessions. A limiting development came from a large Polish producer (KGHM) indicating their sales in July were down 10% compared to last year. The fresh higher high yesterday in the wake of generally soft PMI data and ongoing fears of slowing in China gives credence to the idea that the market found value at Monday's low of $3.60.

MARKET IDEAS: While we will not argue against additional hard-fought gains in September copper, macroeconomic conditions leave it vulnerable to a sudden setback toward recent consolidation lows at $3.55. Given the growing fear of hawkish US Federal Reserve dialogue on Friday, an unfolding pattern of soft global PMI data, and the low to high rally from last week's low of nearly $0.20, the risk and reward to fresh longs is unattractive.