"...To test the low, or not to test the low? That is the question. Whether 'tis nobler that Gold suffer the slings and arrows by outrageously revisiting 1678, or to take arms against the sea of Shorts and -- by opposing -- end them? ... Never to die, but perhaps stay asleep ... perchance to dream. Or to simply forget the low, get off the loo, and ascend devoutly as to be wish'd? Ay, there's the rub!..."

Still, nothing can seemingly stir Gold from falling into a deeper sleep. In recording its eighth weekly net loss of the past 12, price settled yesterday (Friday) at 1723, its second-lowest hebdomadal close this year, (the highest being 1992 on 11 March).

So: does the repetitive low of 1678 go? "Oh, it's that Dollar Strength, you know!" Bullpucky. As a regular valued reader, "you know" that Gold plays no currency favourites. And with the Dollar Index rising even as its supply has increased, that is really telling us the €uro, ¥en, £Sterling, C$, krOna and (sadly) CHFranc are stuck on Hamlet's aforementioned loo.

But at least in the technical interim to answer the question if 1678 goes, let's go to Gold's weekly bars from a year ago-to-date. Therein we see the (literally "Short-lived") parabolic Long trend almost having been extinguished this past week, the rightmost blue bar nearly penetrating the rising blue dots:

Given today's price is 1723, and -- sleepy as it seems -- Gold's expected weekly trading range is now 56 points high-to-low, the above graphic's flip-to-Short price of 1699 is well within range, and should it go, so "ought" the 1678 low in due course. We'd rather in the fundamental interim see Gold awaken were money managers to finally start their stake. But that's a pretty big ask these days.

And riding out the belief that "the stock market always comes back" is cool, Squire? Historically it "always" has, albeit you'll recall it took 13 years from pre-DotComBomb to post-FinCrisis for the S&P 500 to finally net a gain of just +2%.

Moreover, the future may be far more daunting. As we just wrote to our Investors Roundtable: "...'twill all hit home when the common stock-holding shlub sells his shares, but then his broker 'doesn’t actually have the money' to fund the account. As you already know, some 50% of the S&P’s current market cap alone doesn’t exist in the money supply (M2)..." 'Course, the Fed and other central banks (as the S&P 500 is 40% "foreign-owned") could then come to the rescue by printing the many requisite $trillions overnight ... from which Gold can then swiftly ascend to 10,000 (just a ballpark guess). Again, do not miss out on that.

Regardless, terribly missing in action of late are Gold's high-level equities brethren as we next see in this year-over-year chart of their percentage tracks. As goes the leverage game, Gold -5% itself has suffered the least, followed by Franco-Nevada (FNV) -16%, the VanEck Vectors Gold Miners exchange-traded fund (GDX) -27%, Agnico Eagle Mines (AEM) -28%, Newmont (NEM) -29%, and both Pan American Silver (PAAS) and the Global X Silver Miners exchange-traded fund (SIL) -42%. In a word, brutal:

All that noted, next -- courtesy of the "Misery Loves Company Dept." -- we've the standings of our BEGOS Markets through 2022's eight months plus two September trading days. Podium-topper Oil has lost much of its mojo (-33.1% from the year's high of 130.50 to now 87.25), whilst Gold is somehow holding on to third in a -5.9% losing effort (very akin to Formula One's third-place Scuderia Ferrari this season). Note again that economy-leading Copper remains the worst laggard:

As for the S&P 500 (-17.7%), given September's historic negativity, plus the ongoing Fed assurance of rising interest rates, the lack of Q2 Earnings Season to materially reduce the "live" price/earnings ratio (now 35.2x vs. the lifetime mean of 22.4x), and the inability of the 4180-4100 support zone to hold its score now that we're down at 3924, it "looks like" we'll see the year's low (3637) get re-tested this month, overshoot bringing the Index to the top of the 3600-3200 support zone. (Should that go -- and remember Powell's "Pain" Plan -- reversion to the P/E mean is S&P sub-2600, overshoot of which can test the COVID low of 2200). And to-date, there's still "no fear" in the website's MoneyFlow gauge. 'Course nobody knows, but 'tis all good to know if you're scoring at home, as doubtless you'll find it difficult to ferret any of this out anywhere else. For example: a major U.S. bank in mid-August published a piece entitled "How Far Will the Market Correction Go?" We read its entirety: neither therein was the word "earnings", nor did they even reference an S&P level, nor answer their own question. The Investing Age of Stoopid continues.

As to the eight BEGOS Markets (ex-Dollar), here are their respective last 21 trading days (one month). And with Oil's grey regression trendline about to turn negative, that'll complete the all-down set. The "Baby Blues" of course set the tone of consistency for each market's trendline: 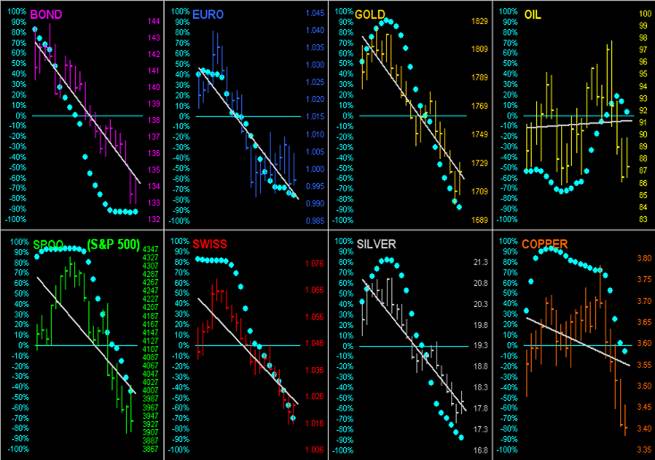 Indeed as Copper & Co. continue their southerly-economic course, Dow Jones Newswires ran this past week with: "Maybe the U.S. Economy Isn’t Really Shrinking: Gross domestic income, an alternative to gross domestic product as a measure of output, points to a stall instead of a recession." 'Course, the lifeblood of media being advertising revenue, changing "the rules" so as to remain positive and not lose followers is critical.

Obviously as you regular readers very well know, the StateSide economy has been recessive all year. But it was only recognized as such a few weeks ago, and then one week later was dismissed. Still that said, U.S. Senator Elizabeth Warren (D) sees the Fed tipping the economy into (the already ongoing) recession. To be sure, even as August's Consumer Confidence just recorded its biggest one-month leap since June 2021, mitigants included a slowing in Payroll creation, an increase in the Unemployment Rate, decreases in both Hourly Earnings (what inflation?) and Hours Worked, and shrinkage in July's Factory Orders. Fault the Fed? That's what she's said:

Meanwhile on this side of the pond, EU consumer prices are up some +9% over those of a year ago. Can the European Central Bank's plans to aggressively raise rates stall the skyrocketing Dollar Index, and in turn actually get Gold a bit of a bid? This September to remember is just gettin' started...

Meanwhile per this next graphic of the 10-day Market Profiles for Gold on the left and Silver on the right, for the first time "in seemingly forever" present prices have departed at least the bottom of the basement. Note that Sister Silver is sitting right on her most dominantly-traded price of the past fortnight at 17.90. And with the Gold/Silver ratio at present 96.2x vis-à-vis the century's mean of 67.0x, one can opine that Silver "ought be" +30% higher at 25.71. "Got Silver?"

It being month-end (plus a couple of days), 'tis time to again review the Gold Structure chart across the past 11 years. Quite the roller-coaster ride 'tis been. That double-top (2020 and 2022) does not look technically appealing for Gold; but fundamentally appealing is its uncharted reality of everything else: 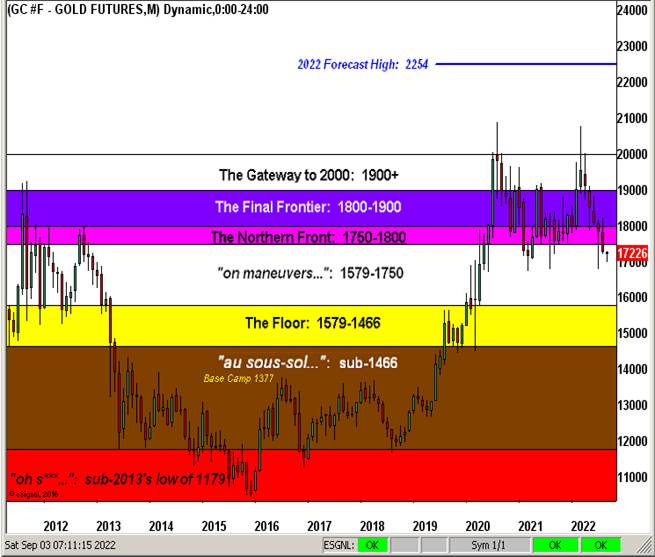 And so to wrap:

StateSide 'tis Labor Day Weekend. As dear old Dad used to say, "On Monday, the great American sap tows his boat home from the lake." But before that comes summer's final ritual blowout BBQ. And here in neighbouring France, newly-elected legislative deputy "eco-feminist" (her words) Sandrine Rousseau (Europe Ecology – The Greens) right out of the chute is on the BBQ warpath.

According to Le Soir, Mme. Rousseau a week ago attested that it be necessary "to change mentality so that eating a steak cooked on a barbecue is no longer a symbol of virility" and moreover that attention need be drawn to the impact of meat-eating on climate change. In partial counter to this, Communist Party leader Fabien Roussel opined that "For me, we eat meat according to what we have in the wallet, and not according to what we have in our panties or in our underwear."

For whatever all that Rousseau vs. Roussel is (or isn't) worth, have a great holiday and just make sure -- sleepy as 'tis -- you've got some Gold in your pocket! 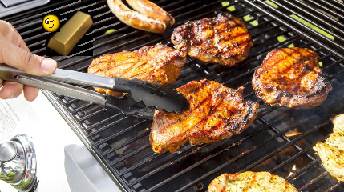