Reversals in gold and silver are more bearish than declines

Gold's fall after US Labor Day is not the only thing that happened in the precious metals market. Other events paint the near future in bearish colors.

In yesterday's analysis, I explained how extremely likely it was for gold to decline after U.S. Labor Day, and that's exactly what happened – gold declined. Not only that – it actually reversed its early gains before moving lower, and we saw the same thing in silver and mining stocks, and the reversal is more bearish than a small decline, as it indicates that the very brief rally is likely already over.

Let's take a look at what happened recently, starting with gold.

As I wrote above, gold reversed and declined yesterday. However, it also did something else – it declined on volume that was relatively big after a daily upswing that took place on relatively low volume.

The volume readings confirm the bearish nature of the recent back-and-forth trading. 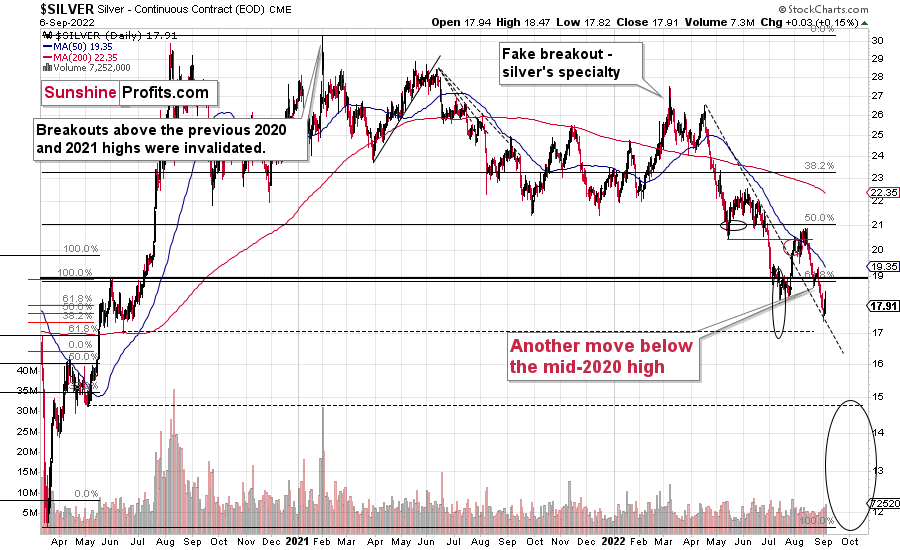 Silver did something similar.

The white metal moved up to $18.47 on an intraday basis, but then declined and ended the day only $0.03 higher. This means that it declined by $0.44 before the closing bell, Aad it closed below the July lows. The breakdown below them was therefore just verified. This is bearish. 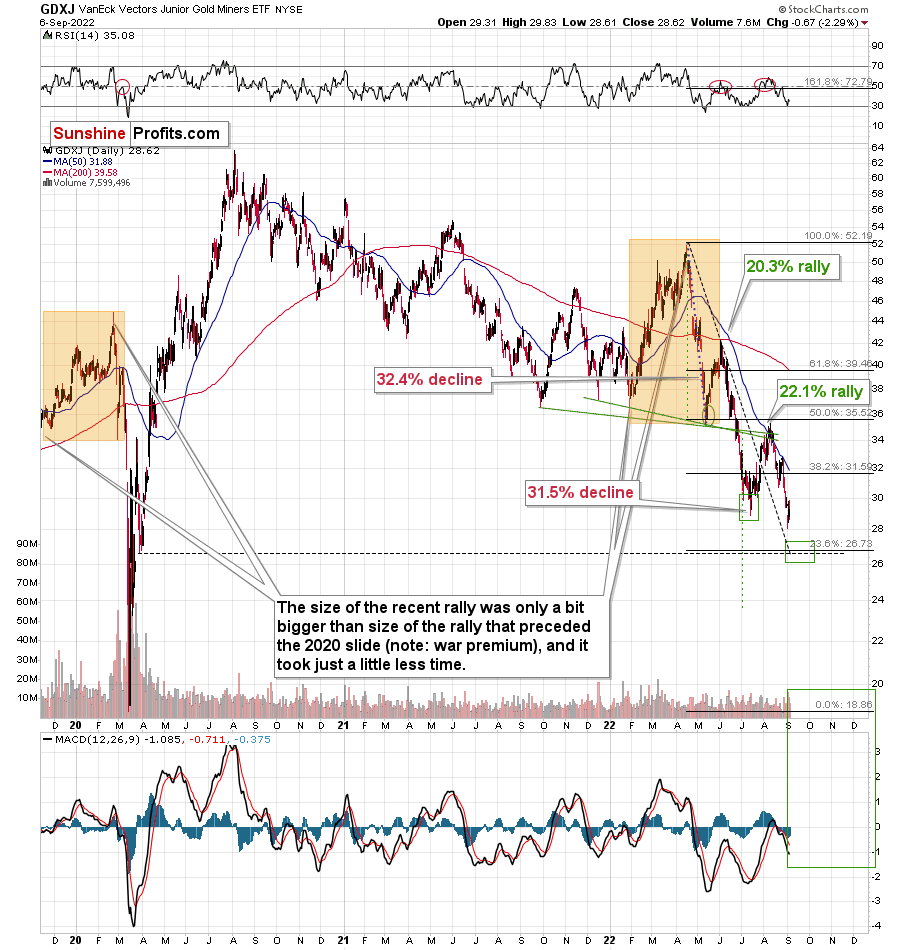 What about junior miners? They declined more visibly, ending the session 2.29% lower, thus further increasing our profits from short positions in them. The GDX was down by 1.47%, and the HUI Index by 1.08%.

Let's zoom in – the chart below is based on hourly candlesticks.

What's Up With Gold Stocks?

In yesterday's analysis, I commented on the good technical reason why the GDXJ ETF has moved higher recently:

The GDXJ moved higher and briefly moved above the previous trading day's closing price and its intraday low. Then, the GDXJ moved back down and closed below those levels.

The important extra detail here is that Thursday's session started with a price gap. It's important because prices tend to "want" to close the price gap before continuing with their current trend. "Closing the gap" means temporarily moving to the levels and actually trading where there was no trading before (thus, the gap). That's exactly what we saw on Friday.

What we haven't seen on Friday is an invalidation of the breakdown below the July lows in closing price terms. Consequently, the breakdown was not invalidated but verified.

This is not a bullish price action, but something bearish and quite normal. Consequently, the outlook remains bearish.

Indeed, the value of the GDXJ ETF declined yesterday as well. What's particularly interesting is that while closing below the lower border of the price gap, the GDXJ also closed below the intraday low of July. This means that the breakdown below those lows just became even more believable.