Gold and silver stemming their downtrend

Mme. Lagarde & Co. just kicked the Buck in its butt, in turn giving Gold a bit of a bid, but -- as Mark Twain might have penned -- "'Twarn't really much".

Gold settled out the week yesterday (Friday) at 1728, a price which has now traded within six of the past ten weeks.

But even accounting for the supply of Gold itself having increased by +16% from a decade ago, the Dollar's debasement alone places the value of Gold today (per the above Scoreboard) at 3990 even as it essentially continues to sit at a price of 1728. You can thank the at-large disinterest in owning Gold plus the "M word" crowd for such sleepy lowly Gold pricing.

Lack of bullishness notwithstanding, we do offer some good news at least technically for our precious metals. As this past week unfolded, both Gold and Silver had their daily parabolic studies flip to Long. Thus for those of you scoring at home:

'Course, hardly does the past vacuum of "average" predict reality, but it does give us an idea near-term as to how much meat may remain on the upside bone. And from their respective present prices (Gold 1728 and Silver 18.79), we sense there is more meat to seek. To wit, our two-panel graphic of Gold's daily bars from three months ago-to-date on the left, and those for Silver on the right. The present key for both cases are the "Baby Blues" of trend consistency making the early appearance of rising from their sleepy ashes, for which you regular readers and website followers know the rule: "Follow the Blues and not the news". Or musically put: "Boo-lacka-lacka-lacka, Boo-lacka-lacka-lacka, Wanna take you higher..."--[Sly Stone '69]: 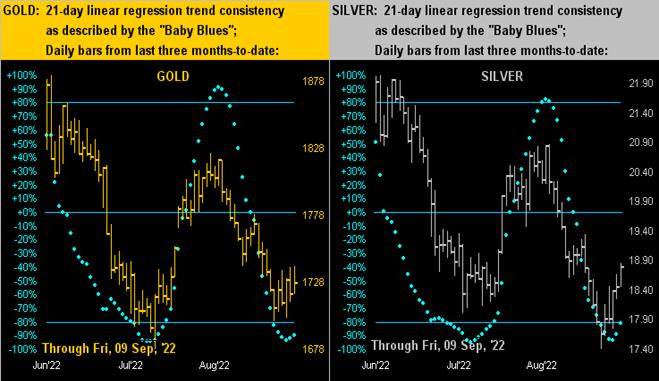 Indeed as we turn to Gold by the week from a year ago-to-date, such near-term bounce is critical to keep price from falling through the weak wall of the barely sustaining blue-dotted parabolic Long trend, the rightmost bar again going right to said wall without penetrating it. For should it bust (which in the ensuing week would be at 1702), the year's low of 1678 could well too be sliced through. As sleepy as Gold has been of late, at the same time 'tis sleep-walking on a knife edge: 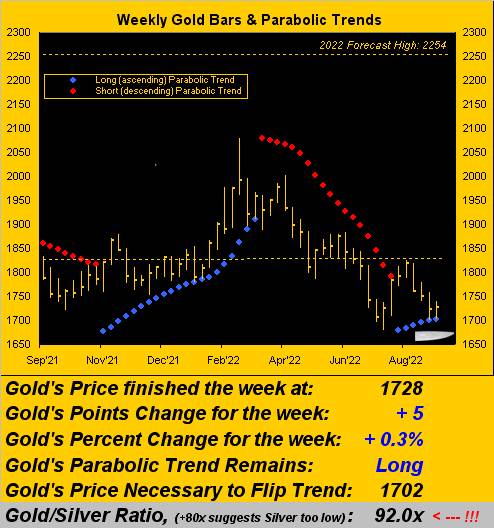 And thus the precious metals responded in kind, (Gold low-to-high by as much as +2.3% and Silver by +6.3%). And should it (as anticipated) all go wrong for the stock market -- it being September, it being lack of supportive earnings, it being a recession -- we "ought" see the precious metals get some further grip, if for no other reasons than the noted daily parabolic Long flip and "Baby Blues" righting their ship.

As for the "conventional wisdom" that Gold and Dollar are inversely correlated, we again demonstrate that Gold plays no currency favourites per this next two-panel depiction. To the left we've Gold versus the Dollar for the most recent six-month run: negative correlation there. But to the right, we've their six-month period out of 2009 into 2010: positive correlation there. Oh to be sure, Gold today is well down, let alone priced severely below valuation; but this proves yet again that fiat in any form is irrelevant (i.e. fake). Or as the late great Richard Russell would remind us: "Gold will always be worth something". We remember when we were wee that a gallon of gasoline in La Jolla (CA) cost 15¢. Today 'tis $6.79 (45x as much). Gold since then is +4,837%. Thus lose thee not sight of the Big Picture even as Gold endures its present, sleepy, "manipulated" malaise: 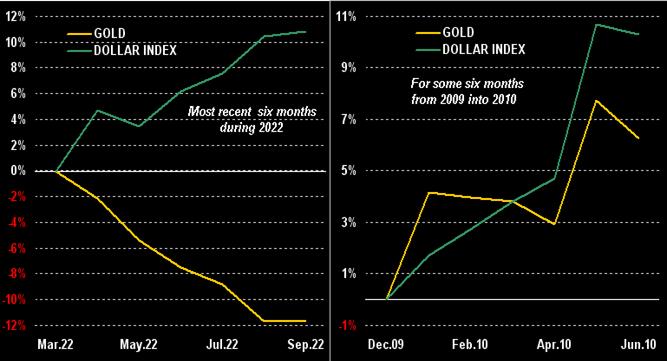 As for the recession, did you see the "Quartz" (who?) piece this last week entitled "Service Economy Keeping US Out Of Recession" (even though 'tis already well into one and certainly so on a REAL basis)? The denial continues. But can the currently reported Q3 economic metrics at leastturn the Gross Domestic Product nominally (for you WestPalmBeachers down there that means inflation counts as growth) into a positive number? We'll know "officially" on 27 October.

'Course with the Economic Barometer, you may not have to wait those seven weeks to find out. Note: the puke-green portion of the Econ Baro line is essentially specific to Q3 data thus far reported. Is the worst behind us?

We might derive a little more accuracy as to how Q3 is unfolding given 16 metrics shall hit the Baro in the new week: at first blush, they appear to be a wash, mais on verra...

As for the S&P 500's scrabbling against all odds to get a September foothold, the Index has been "textbook oversold" for these past two weeks. But the MoneyFlow notably for last week is unsupportive of the up move, (which you website followers know is a leading indicator). Today at S&P 4067, we still sense the 3600-3200 support zone awaits in this year's wings. Moreover on the subject of "thin", the amount of money requisite to move the S&P one point today is just 50% of what it was last February. (A word to the wise is sufficient).

Meanwhile as to FedSpeak this past week, Lael "The Brain" Brainard opined that her Bank's raising of rates will slow inflation, whilst Jerome "The Chair" Powell expects higher rates to bring higher unemployment. Let's thus re-cue Jefferson Starship from back in '84: "No Way Out..."

However, there is a way up for the precious metals to move as we turn to their 10-day Market Profiles featuring Gold (at left) and Silver (at right). For the yellow metal, the initial key is to stay above the large apex at 1723. For the white metal, the 18s appear near-term supportive, with a run toward the upper apex of 19.35 in the offing should the follow-through of the earlier technicals run their course:

Speaking of running, as has been well-publicized, long-time California residents have been on the run to less-intrusive states and even across the Pond. "There goes the tax revenue!" However, in a "last ditch" (or otherwise) effort to keep 'em at home, Governor Gavin "The Gruesome" Newsom just signed into law for "fast-food" establishments a minimum wage increase from the current $15/hr. to $22/hr. by next year. As demonstrated time immemorial, just as raising interest rates also raises unemployment, so too does raising minimum wages. "Hey Honey! The guy who makes our Big Macs just got sacked!" Keep your eyes on the Econ Baro, and as the precious metals downtrend gets stemmed, get your hands on some Gold and Silver too!