Current Gold Outlook; the good, the bad, and the ugly

Unless you’ve been living under your computer screen you are well aware of recent price action pressuring gold dramatically lower. Over the last six months since gold hit its highest value this year gold has been devalued by $400 per ounce or 19.45%.

Questions that need to be asked and answered to formulate a projection that has some probability of being accurate require that you look at the current economic fabric on multiple levels. From different vantage points so to speak; I have broken down into three categories, the good, the bad, and the ugly.

But before we move forward, we need to establish the narrative that causes gold to lose 20% in six months. In March 2021 the Federal Reserve raised its key Fed funds rate for the first time since 2018. As of September 15, the Federal Reserve has raised rates at each FOMC meeting beginning in March they began with a 25-BP rate hike, a 50-BP hike in May, and a 75-BP hike in June and July. The net result was that the Fed raise rates from near zero to between 2.50% to 2.75%. Next week there is an 80% probability that the Fed will raise rates by another 75-BP.

Repercussions of the hawkish monetary policy of Powell’s Federal Reserve

So, the real question becomes what fallout and hardships will result from recent Federal Reserve rate hikes? The question is much easier to ask than to ponder possibilities but it seems likely that it falls into three categories the good, the bad, and the ugly.

Inflation was running at a 41-year high with the CPI at 9.5%. The Fed raised rates in an accelerated manner so that they can effectively begin to reduce the extremely high level of inflation. To not act accordingly would be akin to the Federal Reserve relinquishing itself from its fiduciary responsibility composed of a dual mandate to a single mandate one being inflation being at an acceptable level of 2%.

Over the last six months, monetary policies of the Federal Reserve have had a minimal to almost nonexistent effect taking inflation from 9.5% in June to 8.3% in August. Reducing inflation by only 1.2% in six months cannot be considered successful. Ask any middle-class American if they feel like they have seen some monetary relief as inflation has moved down by just over percent. It seems highly unlikely.

On multiple occasions throughout history Chairmen of the Federal Reserve have had to resolve and reduce high inflation. Paul Volcker, Alan Greenspan, and Ben Bernanke all were burdened with this issue. These Federal Reserve Chairman all took an exceedingly aggressive stance to tackle the problem. Volcker, Greenspan, and Bernanke accomplished this task by moving interest rates above the level of inflation. The path of the current Federal Reserve assumes that they can try something different and still accomplish their intended goal of moving inflation back to 2%.

However, the ugly truth is that much more rate hikes are needed and rates will have to remain elevated for a lot longer than most people realize to have any dramatic effect on lowering inflation levels. 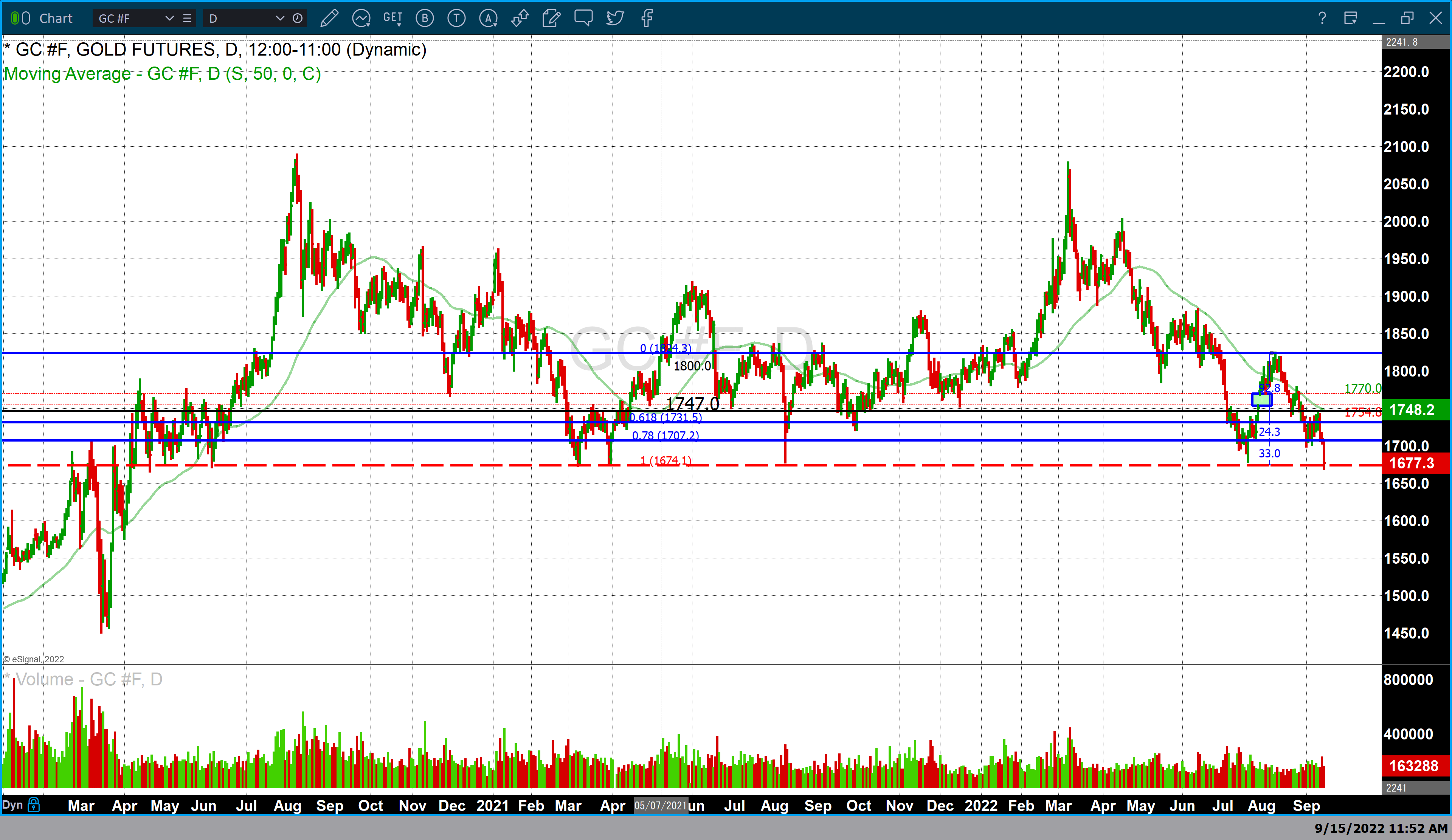 As of 5:45 PM EDT gold futures basis, the most active December contract is down $35.20 a decline of over 2% and fixed at $1673.90. This is a major break below a critical level that was formerly supported. In tomorrow’s article, we will look at the technical levels that gold could trade to if it continues to move south. I had