Inflation is hotter than expected, gold colder than hoped

The annual CPI decelerated in August but came in higher than expected. Bets on a more hawkish Fed increased, while in the case of gold, they decreased.

Inflation stayed hot in August. Unbelievable! At least for the majority of pundits who expected softer inflation. However, I"m not surprised, as I"ve repeated many times that "inflation is likely to stay elevated for some time." But let"s stop bragging – and start digging into the recent CPI report.

The CPI increased 0.1% in August after being flat in July, according to the Bureau of Labor Statistics. It doesn"t seem to be a huge increase, but let"s note that it occurred despite a 10.6-percent decline in the gasoline index. Without plunging gas prices, inflation would be much higher because of the broad-based monthly item increase.

The core CPI, which excludes food and energy prices, rose 0.6% last month, following a 0.3% rise in July. Increases in the shelter and medical care indexes were the largest of many contributors to the acceleration in the core CPI monthly rate. Thus, I bet that although inflation can"t be seen, Americans feel its impact in their daily lives. 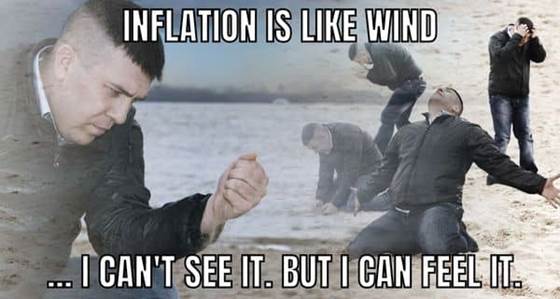 It"s not any better on an annual basis. The overall CPI increased 8.3% for the 12 months ending August, as the chart below shows. It"s a smaller figure than the 8.5-percent rise from July, but higher than expected (the market consensus was 8.0%). The core CPI rose 6.3%, which means an acceleration from July, when it increased 5.9%. Thus, although the overall index has peaked, the core CPI is once again on the rise. 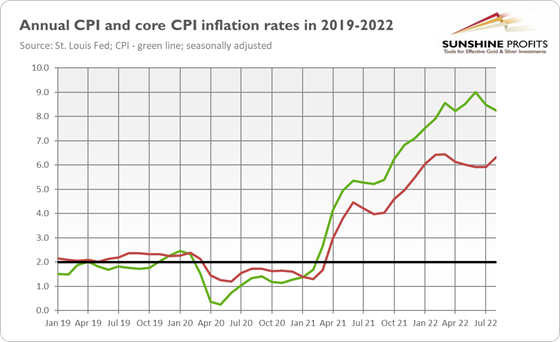 Unfortunately for Americans who struggle with the rising cost of living, inflation will remain elevated for some time. Why? Well, one of the reasons is rising housing inflation. As the chart below shows, the CPI shelter index has accelerated from 5.7% in July to 6.3% in August, the fastest pace since April 1986. The problem here is that this sub-index, which is the major component of the CPI, is rather sticky and the Fed"s actions won"t affect it quickly. In other words, inflationary forces are not weakening at the desirable pace despite the Fed"s hiking rates, while the economy is slowing down and recessionary risks are increasing. 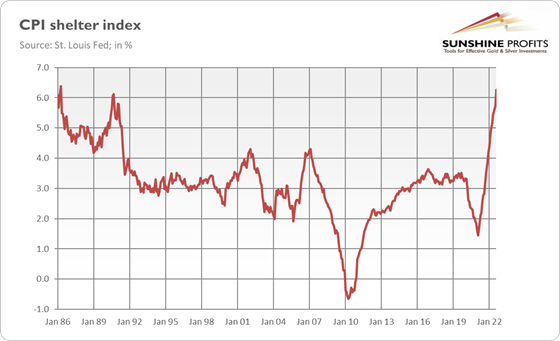 Inflation above expectations boosted market bets for steeper interest rate hikes from the Fed. Indeed, according to the CME FedWatch Tool, the market-based probability that the FOMC will raise rates by 100 basis points at its September meeting has risen from literally zero last week to 31% after the release of the CPI inflation report. Meanwhile, the odds of a 50-basis point hike plunged from 23% to zero. Hence, the Fed is likely to deliver another "jumbo" 75-basis point hike, and gold bulls will still have to wait for the dovish pivot.

The yields on Treasuries increased, with 10-year real interest rates climbing to almost 1% for the first time since the end of 2018, as the chart below shows. Meanwhile, stock markets plunged, with the S&P 500 and Dow Jones falling 3% and 2.6%, respectively. 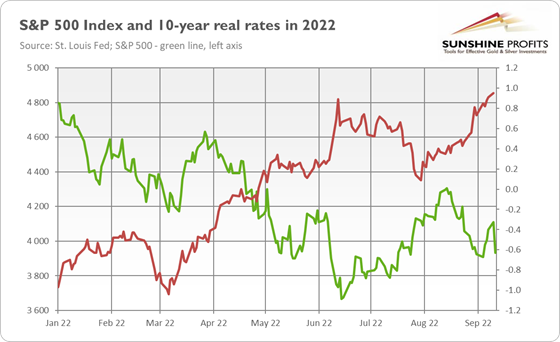 What does the hot CPI report mean for the gold market? Well, it strengthened expectations of a hawkish Fed and boosted bond yields. Hence, despite all the belief in gold as an inflation hedge, the stronger-than-expected number should be negative for gold prices. Indeed, the London price of the yellow metal declined on Tuesday from $1,726 to $1,705 (or 1.2%), as the chart below shows. 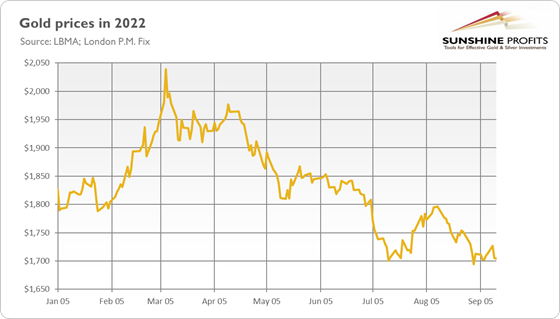 The intra-day drop was a bit larger, but gold still showed relative resilience in the face of a sudden repricing o the future path of the federal funds rate. However, the price of the yellow metal dropped further on Wednesday (September 14, 2022), sinking below $1,700. It goes without saying that gold could suffer more in the upcoming days. Next week, the FOMC members are gathering, and their meeting, not to mention the fresh dot plot, is likely to be hawkish. Of course, much of that hawkishness has already been priced in, but these two weeks could be crucial for the gold market, with more downside potential (especially if gold declines below key price levels).

They say that there is always a silver lining. Indeed, forget about the peak in inflation and the soft landing. Given that the Fed was delayed in its fight against inflation and that interest rates are a rather blunt tool of monetary policy, the U.S. central bank is probably going to overdo it, which will lead to a recession. Then – or sooner if the Fed pivots before the downturn – gold will rally again.