Trend is down with a bearish conundrum of rising rates/recession 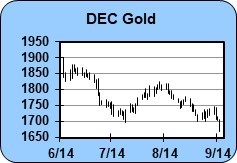 With the dollar index posting a six-day high overnight, traders should expect new contract highs in the coming sessions, even though a lack of critical US economic data today might limit activity in the currency markets. Even with anxiety flowing from weakness in global equity markets and broadening recession sentiment, gold and silver are not benefiting from economic uncertainty. Instead, sellers continue to factor in rising rates despite the extended $86 slide this week in October gold and the $1.23 decline in December silver. Fortunately for the bull camp, gold ETF holdings saw an inflow of 43,587 ounces yesterday, while silver holdings posted another significant outflow of 2.3 million ounces. We suspect silver is a victim of investors fleeing a physical commodity market facing recession, of spillover pressure from gold’s weakness, and adverse currency market action. While the Indian government has reduced the base price of gold imports (which in turn lowers the import duty), buyers remain hesitant, looking for even better bargains ahead. Six-month lows in Indian gold overnight failed to spark bargain-hunting buying. We expect to see continued sell-the-rumor action off higher rate expectations until the US Federal Reserve rate decision next week. The previous downside target from derived from a gap on the weekly charts left back in April 2020 at $1,654 was violated, leaving the bottom of the gap at $1,633.70 the next target. Initial downside target in silver is at $18.65.

PGM
With significant two-sided, directionless action in palladium in the first half of September (a trading range of $240) and classic fundamentals virtually nonexistent, December palladium is unlikely to establish a trend without a major development from Russia or China. The early September rally showed little increase in trading activity and was followed with a decline in open interest. Therefore, we suspect a large measure of the rally was covering of a spec and fund net short of 2,129 contracts. Critical pivot point support today is at $2,069.50. The bearish outlook for the platinum market is more definitive, with the bear camp confident in the wake investment interest rushing out of platinum ETF holdings. Holdings fell again 4,131 ounces yesterday, pushing them closer to a 13% year-to-date decline. Earlier this week the August platinum tested and failed at a downtrend channel resistance line drawn from the March and August highs at $924.95, which suggests that the market could slide back to the September low.

MARKET IDEAS: The best hope of finding support in gold and silver is for them to follow through aggressively on the downside and remove more weak handed longs and exhaust the sellers. We expect traders to continue to sell the rumor of higher rates and factor threats of recession into the September 21 FOMC rate decision.

The bias is down favorable Chinese industrial production discounted 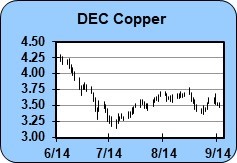