In leading directly to Gold’s weekly bars, we begin with this timely quip: "It don't do for a man to tempt providence too often." --[John Kitzmiller as Quarrel, "Dr. No", Eon Productions 1962]...

...and thus as was written in the prior two weeks, price had twice tempted providence, which had saved Gold from turning south. But this past week: thrice by price was not nice as it eclipsed the blue dots of providential parabolic Long trend, flipping it to Short. In turn, this year's prior low (1678) is gone, the rightmost encircled new red dot heralding lower levels in the balance as now depicted per the above weekly bars.

Indeed penned just a week ago with both Gold and Silver graphically stemming their downtrend, albeit the blue-dotted boundary leaving no margin for error: "...should it bust ... the year's low of 1678 could well too be sliced through..." Recall again as well from 09 July: "...let's just say we don't wish to see last year's 09 August low of 1678 go..." Now that it has by 1662 trading this past week toward price settling yesterday (Friday) at 1685, how low does Gold go?

Warning: should you lack substantive intestinal fortitude, you might skip the balance of this paragraph. (Three, two, one...) With respect to the weekly parabolic having now flipped to Short, strictly by percentage drop for the prior 45 parabolic Short trends century-to-date, the median fall is -5.1% and the average fall is -5.9%. Whilst we all understand that hardly are such measures predictive of reality, that case nonetheless suggests Gold dropping to around 1599-1585. 'Course Gold fundamentally is vastly underpriced (1685 today vs. its 3985 supply-adjusted, currency-debased valuation). But technically it ain't pretty. In fact, if we didn't know the following weekly chart was of Gold from 2020-to-date, we'd evacuate! The "double-top" (August 2020 and March 2022) alone is daunting. Further by price structure, Gold's broad-based support zone (into which it has already dipped a bit) is 1704-1451. The midpoint of that (to which in the technical vacuum market prices oft return) is 1578 per the thick labeled line, itself essentially "in line" with those past parabolic Short trend percentage drops. Too, the several "safety ringlets" of key prior lows were broken per this week's rightmost bar. "A vodka-alka-seltzer please...": 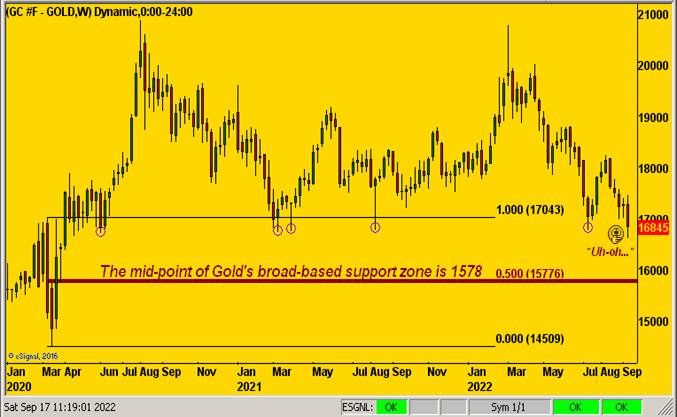 Now we're not anticipating that Gold is actually going to break below 1600. Wishful thinking perhaps, as there must be some entities that are buying Gold: in a recent search for the metal itself we've been met with the dreaded "out of stock" message. Besides, if (as is bandied about) just a wee 0.5% of managed portfolios include Gold exposure, then how can it keep being sold if "nobody" owns it? Obviously no one knows if Gold shall traipse on down to that 1578 level; but if price doesn't get off the schneid in a week's time, our call for 2254 this year shall have died.

All that said, Sister Silver has weathered Gold's slide quite well, in fact toward reducing the Gold/Silver ratio from 92.0x just a week ago to now 85.9x. To wit in this next two-panel precious metals graphic of the daily bars from three months ago-to-date, Silver at right has broken its union with Gold at left, the white metal's baby blue dots of regression trend consistency having pulled up to mid-chart whilst those for the yellow metal have (at least for the present) run out of puff: 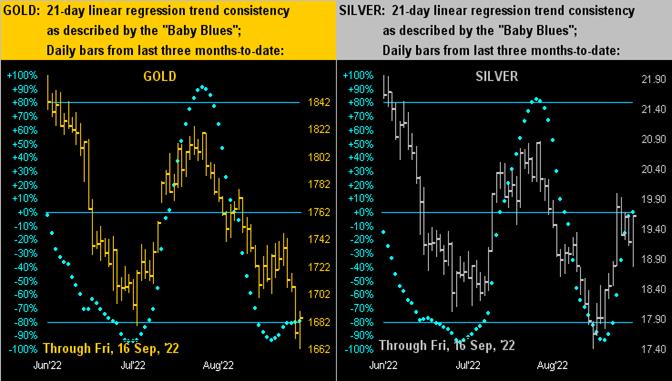 As for economics, even as 10 of the past week's 16 incoming metrics for the Econ Baro were improvements, the screws continue to tighten. Come this Wednesday (21 September), the Federal Reserve shall raise its Funds rate "at least" (so 'tis said) another +0.75%, placing the rate above 3% for the first time since the crumbling of the FinCrisis started to set in during January 2008. And oh by the way (should you be scoring at home), the FedFundsFutures settled yesterday at 4.020%. Thus none of the primary BEGOS Markets (Bond / Euro / Gold / Oil / S&P) are pleased about that per their collective losing percentage tracks across the past 21 trading days (one month), each component now below the red 0% axis: 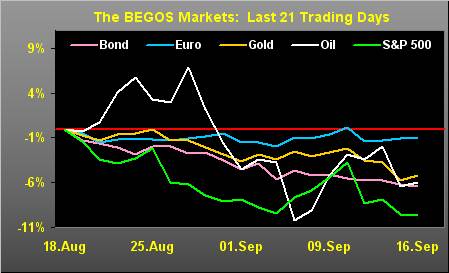 As to the Econ Baro itself, here 'tis:

So: are the Baro's recent "gains" enough to return REAL Gross Domestic Product back from shrinkage to growth, thus "officially" declaring the recession as "over" a mere 12 days before the StateSide mid-term elections? Talk about slick timing, were it to so be. Again, we'll know come 27 October.

Regardless, further turning of the screw is slated for this side of "The Pond": France, Germany, Italy, The Netherlands and Spain are to pin a 15% minimum tax rate as early as 2023 on large companies (effectively turning them from job creators into job let-goers as would history typically dictate). Moreover -- (deep breath) -- a "new study" by the always emboldened World Bank has determined that central banks' interest rate increases can lead to a global recession next year. (Yes, folks actually get paid to figure this stuff out. Who knew?)

What we do know as earlier noted is that Silver held her own this past week whilst Gold went weak. Here we've their respective 10-day Market Profiles for Gold on the left and for Silver on the right. That is an unusually stark contrast in positioning between the two with Gold down low but Silver up high. And still broadly by the aforementioned Gold/Silver ratio, Silver remains the better buy:

With but three trading days ahead of the Fed's next turn of its screw, the ever-venerable Reuters ran per a Fed report that "US Household Net Worth Suffers Record Drop in Q2". And as the screw turns, we ask: "How's that variable rate debt workin' out for ya?" Yes, the yellow metal may find itself further screwed in '22, however we may never again find Gold this relatively cheap in the balance of our respective lifetimes. Better to buy 'round the bottom than at the top when everyone else has decided they want it. Or more succinctly put for you WestPalmBeachers down there: Get some Gold! 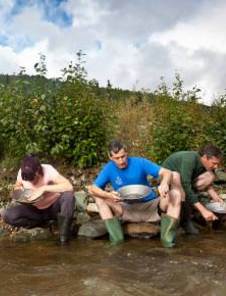