We finally had a resolution, of sorts, in silver. Since April 13, we have had a falling price of silver (indicated as a rising price of the dollar, as measured in silver). And along with this price trend, a growing scarcity of the metal to the market (i.e. the cobasis, the red line). Indeed, the price (of the dollar) and silver scarcity move with uncanny coordination. Almost as if they are linked.

Silver Basis and the Dollar This graph goes back one year, through September 1. 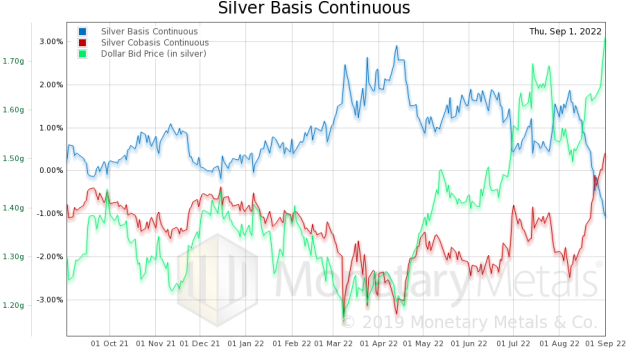 We ended on this date, because it’s the highest price of the dollar along with the greatest scarcity of silver. Notice the red line going over zero. This is notable, as the 6-month continuous basis seldom goes into backwardation (our definition is stricter than most, backwardation is when cobasis > 0).

As it turns out, we top-ticked the price of the dollar (i.e. called the bottom in the silver price), and put out an article on September 2 (written the day prior, and based on that day’s data).

Silver Fever Where to from here? 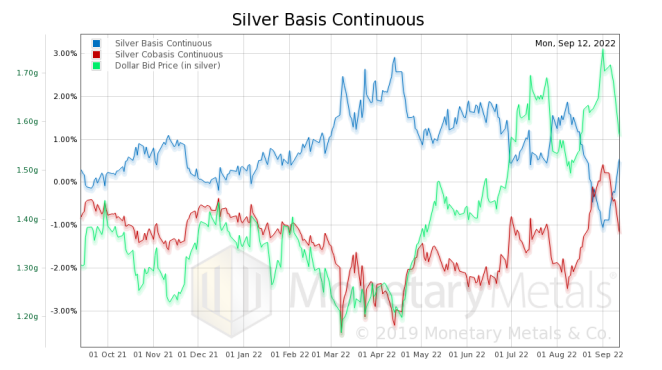 Well, there's two distinct possibilities. One, the price action from Sep 1 to Sep 12 ignited silver fever. Which might go by another name, such as "inflation fears", and people may buy more silver as a result.

Or, as we said in our Gold Outlook Report 2022, with the Fed expected to hike interest rates aggressively this may signal to traders to sell silver until the hiking is done.

We don't know. And neither does anyone else. Beware the purveyors of stale stories like "precious metals being shipped from West to East". Much less conspiracy theory mongers, who will no doubt claim that the price action on Tuesday was "da boyz getting control of the price, again."

In the long term, it's a different story. Maybe better to just put your gold and silver to work, earning more metal with Monetary Metals. And in the end come out better than those who paid storage fees, and over-traded, suffering both bad trades and lots of brokerage commissions.