S&P 500 decline on the disappointing CPI – especially core inflation points at more to come, and the better PPI figures don't make up for that. So, stocks reversed sharply lower - but not before our profitable long position was closed - and the tone for the rest of the week was set. Friday though was marked by buying the dip in the second half of the session, and the risk-on turn in bonds facilitated that. I wouldn't though be getting too carried away with the reversal as the bears haven't said the last word – I consider the rebound on high volume as a temporary reprieve in selling only.

Sep FOMC is approaching, and as a result of the inflation disappointment (I told you it was to turn out sticky, it's service driven – and the reading refutes even the peak inflation hypothesis), bond markets started to assign some (low, but still – that's a major turn from last couple of weeks' position) probability to even a full 1% hike coming this week. The 75bp one would bring Fed funds rate to 3%, and is a very sharp reversal of the low corona era rates (too low for too long), and the risk of policy mistake is understandably very high. If anyone in the mainstream still believed in the soft landing fairy tale, it's probably universally clear now that the pace of the Fed tightening (and balance sheet shrinking) is to take a significant toll on the economy in the months to come. Finally, the effects of the tightening already in, haven't yet played out in full – and both Nov and Dec are likely to bring in more tightening.

Housing is the best leading indicator, and so many metrics beyond the unsold inventory are pointing to trouble ahead spilling over into other sectors. The second key development of last week were disappointing earnings, namely FedEx missing so badly and guiding lower on claims of worldwide recession – hard to blame them if they look at Europe and hear the permanent deindustrialization warnings, or account for China's slowdown. Manufacturing is also about to suffer, and it's been my call for months that manufacturing recession is inevitable – the ISM data would confirm. Rising initial claims point to the labor market being the final one in line to deteriorate – we aren't quite there yet given the not too bad non-farm payrolls.

I want to thank you for your patience during my almost weeklong absence, counting the pre-CPI quick preps over Twitter. Keep enjoying the lively Twitter feed, which comes on top of getting the key analytics right into your mailbox. Plenty gets addressed there, but the analyses over email are the bedrock – and will feature today a longer than usual section dedicated to the many markets on my watch. 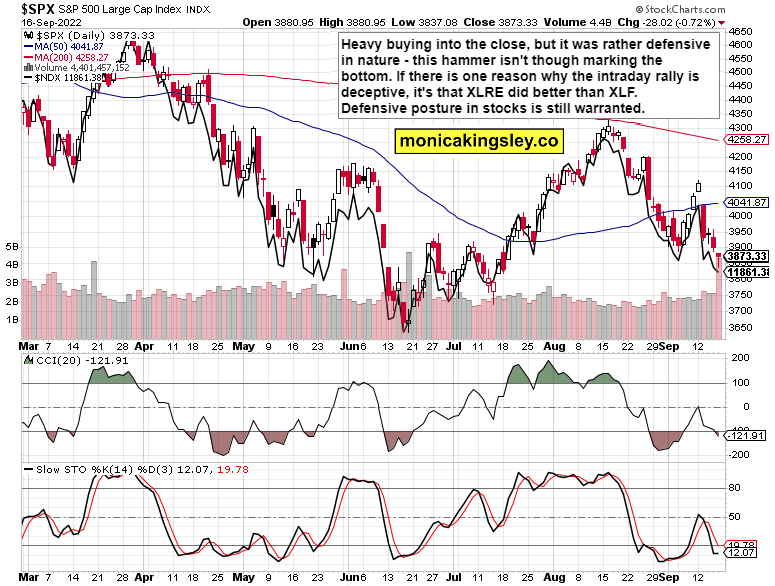 S&P 500 bulls aren't turning around for good, and energy is to remain arguably the best performing sector. Some consolidation is ahead, but any pre-FOMC rips are to be sold as I think the Fed's statements would throw cold water on any notion of backing off tightening (yes, 75bp hike still). Inflation data certainly don't allow for that, and bonds are looking for quite some more tightening ahead, underpinning the dollar. Strong dollar would help the more domestic oriented S&P 500 companies (that's roughly two thirds) but multinationals would suffer – we're still in a stage of P/E ratio drifting lower.

Risk sentiment got its clock cleaned last week, and HYG is pointing to a temporary reprieve only. The yield curve is still deeply inverted, short end of the curve getting hammered, but the long end is meeting some new buyers now that international trade flows recycling has been reversed (Japan, Europe are in trade defictis) while China isn't too much snapping up fresh Treasury issuance and the Fed is not rolling over the debt it owns. The TLT is the most important one to watch here – it's about whether the 30-year Treasury currently at 3.51% slides further or not.

Thank you for having read today's free analysis, which is a small part of the premium Monica's Trading Signals covering all the markets you're used to (stocks, bonds, gold, silver, oil, copper, cryptos), and of the premium Monica's Stock Signals presenting stocks and bonds only. Both publications feature real-time trade calls and intraday updates. While at my homesite, you can subscribe to the free Monica's Insider Club for instant publishing notifications and other content useful for making your own trade moves on top of my extra Twitter feed tips . Thanks for subscribing & all your support that makes this great ride possible!