We are so far only in a technical recession, but the true recession is coming, or it has already begun. It should be positive for gold prices.

After the real GDP declined in the first two quarters of this year, many commentators declared that the economy had fallen into a recession. Such calls are met with a fierce denial from the government's officials. Both President Joe Biden and Treasury Secretary Janet Yellen insisted that the economy is not in a recession but in a "state of transition".

Who is right? Well, in a sense, both sides are right – and both are wrong. Why? Two consecutive quarters of negative economic growth constitute only the so-called technical recession. Which is the popular definition of recession used widely by the financial press and those analysts who don't want to wait several months for the final verdict of the National Bureau of Economic Research (NBER), the official arbiter of recessions in the U.S. Also, not all people like the idea that recessions are decided by a small committee of Ph.D. economists.

However, what's the official NBER definition of recession? It is "the period between a peak of economic activity and its subsequent trough, or lowest point" and "a significant decline in economic activity that is spread across the economy and that lasts more than a few months." Although most of the recessions identified by the NBER do consist of two or more consecutive quarters of declining real GDP, not all of them do. This is because what also matters is the depth of the decline, and economic activity is not identified solely with real GDP, but with a range of indicators:

Because a recession must influence the economy broadly and not be confined to one sector, the committee emphasizes economy-wide measures of economic activity. The determination of the months of peaks and troughs is based on a range of monthly measures of aggregate real economic activity published by the federal statistical agencies. These include real personal income less transfers, nonfarm payroll employment, employment as measured by the household survey, real personal consumption expenditures, wholesale-retail sales adjusted for price changes, and industrial production. There is no fixed rule about what measures contribute information to the process or how they are weighted in our decisions.

There is no fixed rule! So, basically, dating the peaks and troughs of the business cycles by the NBER resembles deciding which pictures are pornographic by the Supreme Court. "I know it when I see it," as Justice Potter Stewart famously said.

Anyway, the key question is whether the U.S. economy is experiencing a significant and broad-based weakening. Not yet. As the chart below shows, the decline in the real GDP wasn't too deep, at least so far. I mean here that the GDP dropped 0.4% in Q1 and 0.23% in Q2 (quarter-to-quarter), which is significantly less than in past recessions. However, I wouldn't be surprised if the GDP declined in the third quarter as well. 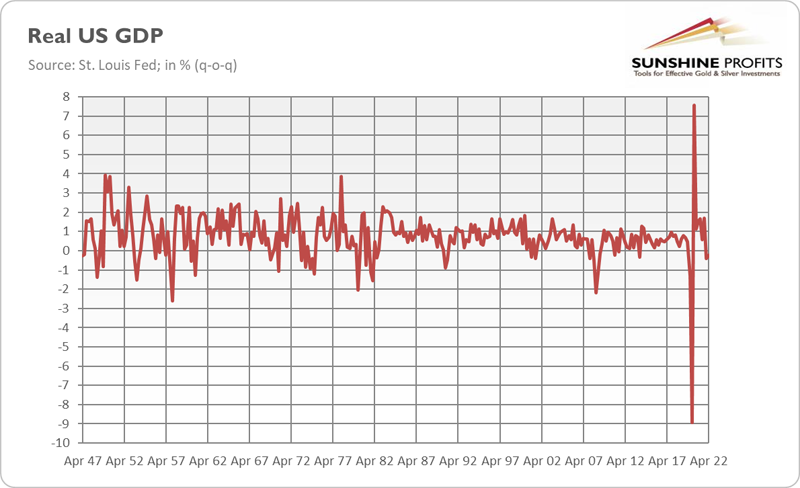 What's more, other indicators, such as real personal income, real personal consumption expenditures, or industrial production, don't call for a recession either. However, they show weakness, while some other indicators are flashing red. The yield curve has inverted, the manufacturing PMI is slowing down, and home sales are plunging. The recession may not be there yet, but it's coming! We may be unprepared, but at least we have memes! 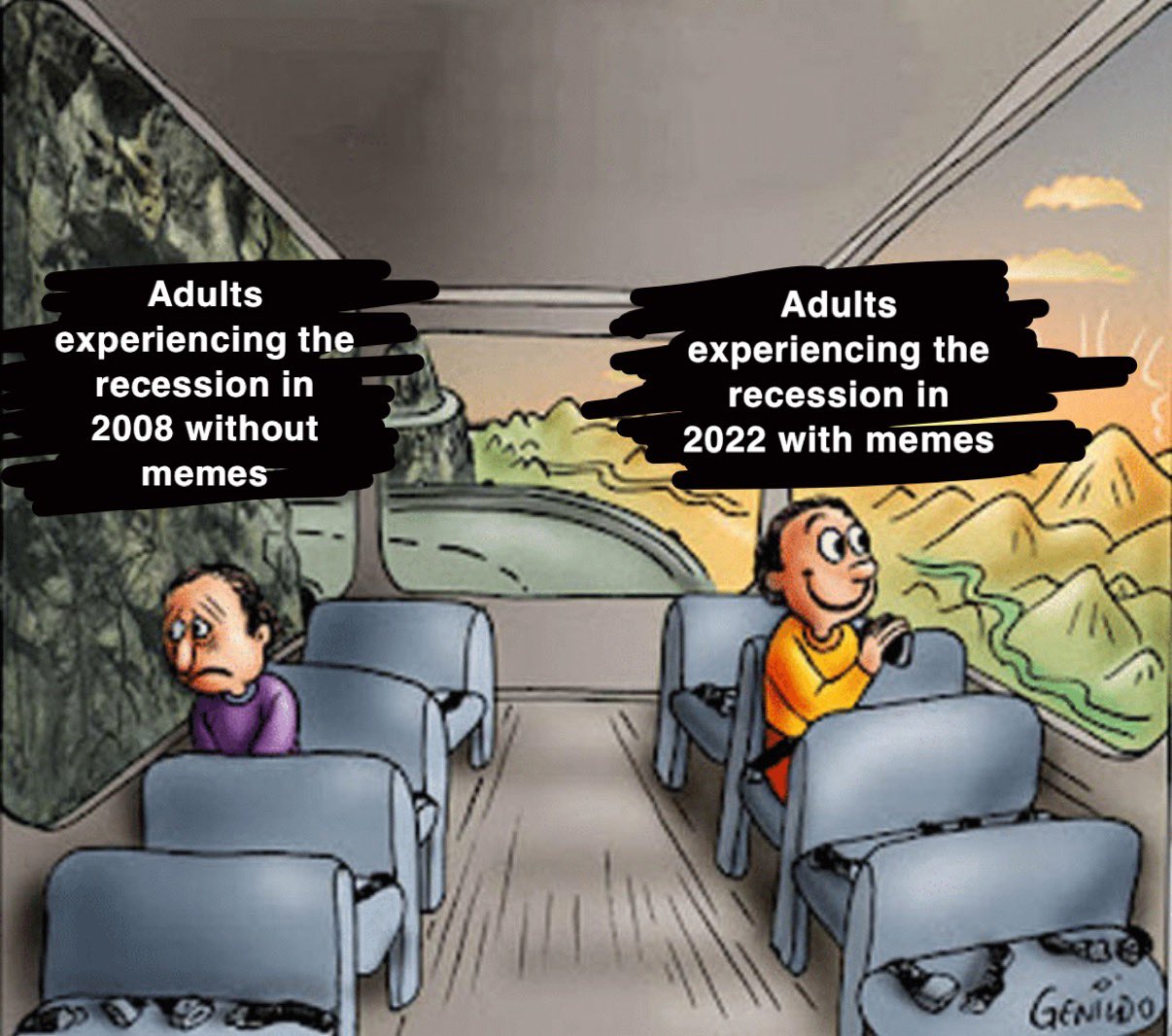 Another issue is that the pundits say that we shouldn't fear recession because the labor market remains strong. However, given that employment never fully recovered from the pandemic, the GDP may decline with relatively strong nonfarm payroll numbers. It's also worth being aware that the labor market may be in worse conditions than it's commonly believed. After all, according to the household survey (instead of the establishment survey), the U.S. economy lost 168,000 jobs since March 2022 (see the red line in the chart below). 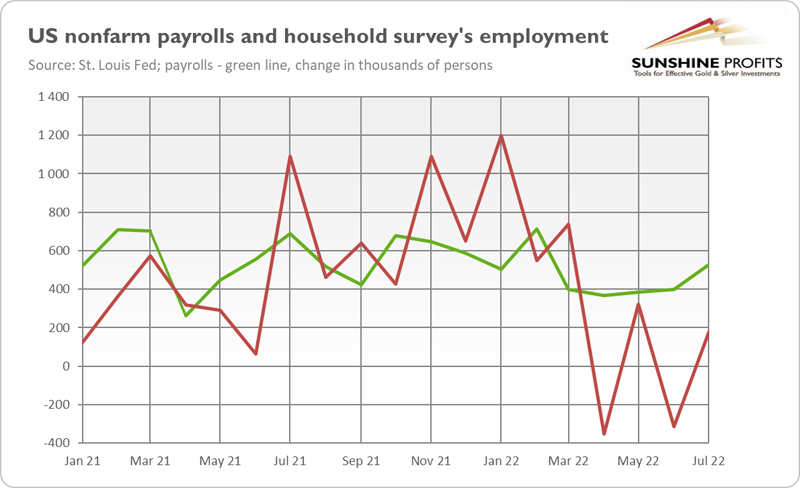 Additionally, according to PwC's survey, half of more than 700 US executives and board members said they are reducing headcount or plan to, and 52% have implemented hiring freezes. So, layoffs are becoming more widespread, which is pretty odd for a "strong" labor market.

Will It Be Beneficial for Gold?

The general problem with both the popular and NBER's definitions of recession is that they merely describe the various manifestations of recession instead of explaining its essence. So, what is it? According to Frank Shostak, a recession is a period of liquidation of economic activities that came into being because of the credit expansion and loose monetary policy of the central bank. In other words, just like a hangover is an unpleasant but necessary readjustment process after a previous alcoholic binge, a recession is an unpleasant but inevitable readjustment period after previous distortions of the economic structure triggered by artificially low interest rates and easy money.

What does it all mean for the gold market? Well, we are so far in the so-called technical recession. The official NBER definition hasn't been fulfilled yet, but a recession is coming. Actually, if we adopt the liquidation perspective of the Austrian school of economics, we could say that recession has already begun, although it may not be seen in all the indicators observed by the NBER. 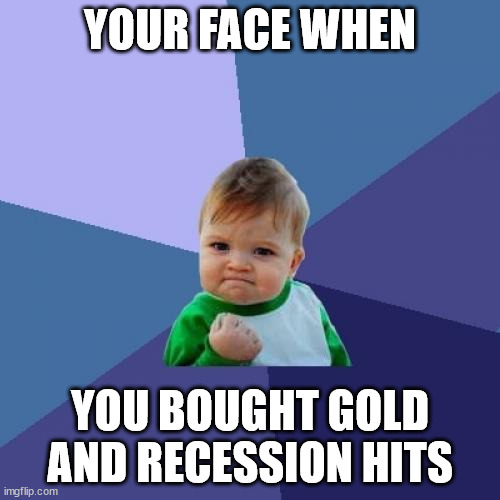 This will be an unpleasant process for the economy, but should be pleasant for gold, especially when the unrest in the markets intensifies and the Fed makes a dovish pivot. The officials will deny recessionary signals as long as it is possible (and, ideally, until mid-term elections), but the economic crisis will play out, whatever the pundits say or do. After a boom, there is always a bust.