Powell’s Federal Reserve was been faced with one of the most difficult periods in time that began with a global pandemic which led to a global economic shutdown. This led to an extreme and some say incorrectly allocated government stimulus. The result; rising inflation which was followed by a critical mistake by the Federal Reserve that led our economy to a potential unresolvable crisis we now face.

It was a single but critical misjudgment by the Federal Reserve that has now made it impossible for the U.S. economy to not enter a deep recession with high and persistent inflation that will scar the economy for years to come.

Based on the assumption that rising inflation was a transitory scenario that would work itself out over time naturally the Fed did nothing. By not raising interest rates years earlier when inflation began to rise, they sealed the fate of creating the economic scenario were currently in. This inaction put the Federal Reserve in a position where its actions were absolutely too little too late.

Because the Federal Reserve did not react in a timely manner, it lost its ability to effectively stop inflation from rising and more importantly set into stone the pain and hardship that the upcoming recession will have on the U.S. economy and its citizens.

There is never been a time in history when the Federal Reserve effectively reduced inflation without moving their key interest rates to at least equal to the current level of inflation.

Paul Volker was the chairman of the Federal Reserve from 1979 until 1987. During his tenure as chairman, he was tasked with effectively reducing the highest level of inflation in history that occurred throughout the 1970s and 1980s. 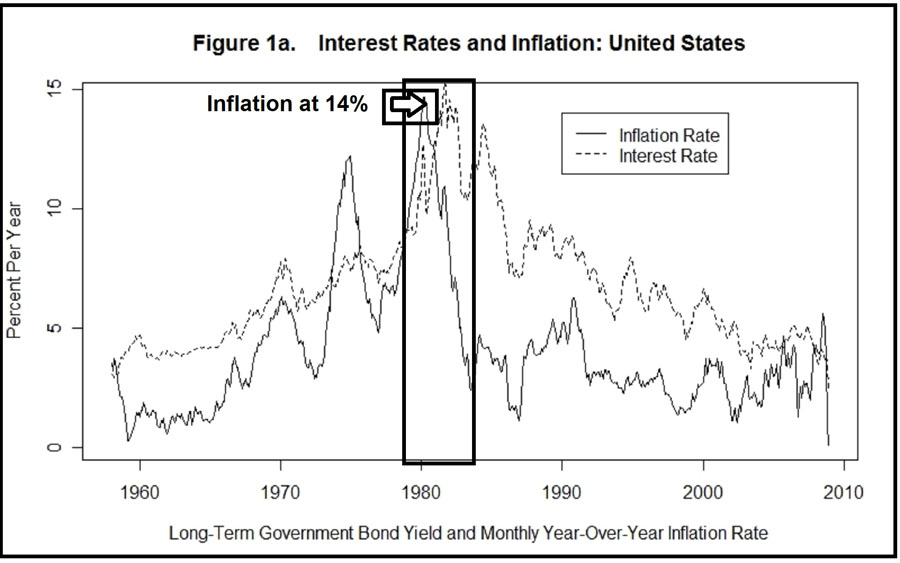 The chart above (chart 2) shows the average level of inflation in 1980 was 13.5%. It also shows that over a multiyear process from 1980 to 1983 chairman Volker was able to effectively bring inflation under control taking it to an average of 3.2% in 1983.

In contrast to the action of the current Federal Reserve from 2019 to 2022, it is clear that the Federal Reserve not only waited too long to begin to raise rates but was ineffective in recognizing that inflation was growing at a rapid pace and most importantly was persistent and not transitory.

The pandemic and recession in 2020 resulted in average inflationary pressures to come in at 1.2%. By 2021 inflation began in January at 1.4% and rose to 2.6% in March 2021. If the Federal Reserve had acted when interest rates were at approximately 2 ½% in March 2021 If they could have effectively controlled and reduced inflation from spiraling out of control.

Now the Federal Reserve is dealing with trying to reduce inflation and interest rate that are too low. Clearly, the Federal Reserve has painted itself into the corner and by a critical mistake that led them to do nothing when they could’ve had a strong and immediate impact on inflation, instead, they sat on the sidelines and watched interest rates rise out of control.

What will come in the years ahead will be the fallout from the lack of raising interest rates sooner. The Federal Reserve blunder most certainly will lead the U.S economy to a deep and sustained recession and high inflation that will a remembered as the worse monetary policy of the 21st century.