Therefore, what’s on everybody’s mind, is if and when Bitcoin is going to wake-up from its lethargy.

Even if we have no crystal ball, we can make some observations:

1)      Over the last 2 months, Bitcoin has never moved lower than $18.5k or higher than $20.5k: each time it dipped below $19k-$18.5k, it was promptly bought back… but also each time it reached above $20.5k, it was also promptly sold. Looks like there are some deep-pocketed mean-reverting trading bots trading that range… but also that hodlers are not willing to sell at the $19k level, but have also no more appetite to buy more for now.

2)      Mark Twain’s famous quote “History never repeats itself, but it does often rhyme”, applies also to Bitcoin. During the last bear market of 2018, which followed a similar pattern as the 2022 one so far, there have been 2 periods of completely sideways price moves for Bitcoin: from mid-Aug. to mid-Nov. 2018 (3 months) where it stabilized around 6k after a 60% loss from the January 2018’s high then dipped again about 40% in the second half of November 2018 to make a low by mid-December around $3,2k then bounced a bit toward $4k a week later and went nowhere until early April 2019 (about 3 months also). Thus, it is not unusual to see Bitcoin consolidating sideways for about 3 months after a strong move down, as frustrating as it can be for volatility junky traders.

3)      There are a lot of macroeconomic news coming between the end of October and mid-November (US inflation PCE, US and BCE rate meetings, US mid-term elections, on top of a worldwide energy crisis, Russia-Ukraine war escalating, etc.) which could sway the risk assets one way or the other, and especially as traders are so nervous to react in order to not miss the next move up or down, which could repeat the 2018 pattern of a new leg down around mid-November or ignite a strong bounce, which would also coincide more or less with the 3-months sideways patterns previously observed after large down moves.
So the good news is that Bitcoin should eventually move again in the next few weeks, but the open question remains which way.

Following today’s US FED whisper of an intervention in US Treasuries through another Operation Twist, BTC jumped 5% higher straight up to $20,300 but stalled so far there, which is the current short-term resistance. Its high-octane cousin ETH jumped 12% higher… 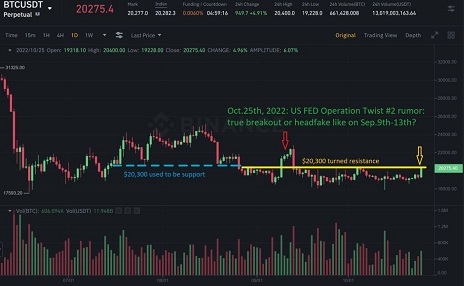 What happens in the next few days will be very telling: another head-fake such as Sep.9th-13th or a sustainable breakout on the way to $25k? But as hinted at yesterday, the price volatility spring has been so compressed that its release will be violent, and we got a preview today.