A recession is coming, but gold feeds on fear

A recession is looming, but unless the Fed and people really fear it, gold won't shine. 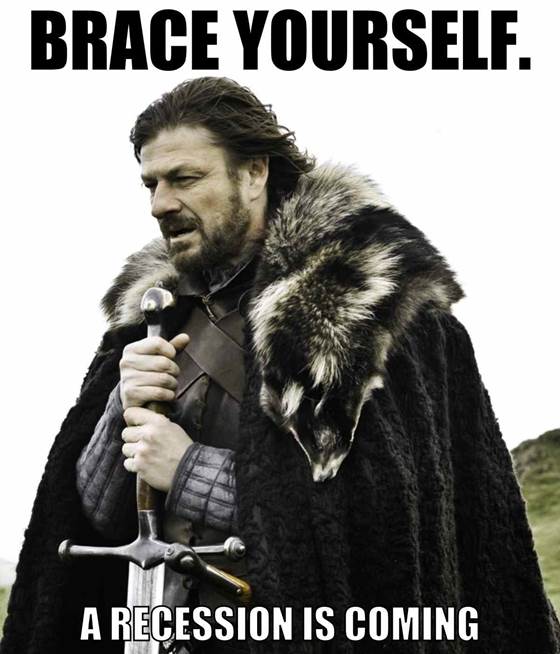 I know that people can get fed up with recession warnings at some point, as they did with the boy who was constantly crying wolf. But there are more and more disturbing signals about black clouds gathering over the economy, despite the fact that the American GDP rose 2.6%, beating market expectations, in the third quarter.

First, America's industrial engine is slowing down. The Philadelphia Fed Manufacturing Index for October came in at -8.7%, vs. -5% expected. The index remained in contraction territory for the second successive month. The Empire State Manufacturing Index also missed expectations. The index fell from -1.5% in September to -9.1%, while economists were looking for a decline to -4.3%.

Second, the Conference Board's Leading Economic Index for the US decreased by 0.4 percent in September 2022 to 115.9, after remaining unchanged in August. The index is down 2.8 percent over the six-month period and this persistent downward trajectory suggests a recession is increasingly likely.

Third, according to the S&P Global Flash US Composite PMI, private sector firms in the US recorded a further downturn in output at the start of the fourth quarter. The index fell from 49.5 in September to 47.3 in October, as the chart below shows. The rate of decrease was the second-fastest since 2009 (with the exception of the early pandemic times).

The decline in business activity was driven by the solid fall in service sector output, as the S&P Global Flash US Services Business Activity Index posted a reading of 46.6 in October, down from 49.3 in September. As Chris Williamson, Chief Business Economist at S&P Global Market Intelligence, commented on the report,

The US economic downturn gathered significant momentum in October, while confidence in the outlook also deteriorated sharply. The decline was led by a downward lurch in services activity, fuelled by the rising cost of living and tightening financial conditions (…) The surveys therefore present a picture of the economy at increased risk of contracting in the fourth quarter at the same time that inflationary pressures remain stubbornly high.

Oh, boy, we will get both contraction and inflation at the same time. What an offer! Two for the price of one! It will be so much fun, especially for the Fed, who will have to decide whether to stimulate the stagnating economy or fight inflation. What could possibly go wrong?

However, the most important recessionary signal is the inversion of the yield curve. The spread between 10 and 2-year Treasuries has been negative since June, but recently the difference between 10-year and 3-month has dived below zero, as the chart below shows. 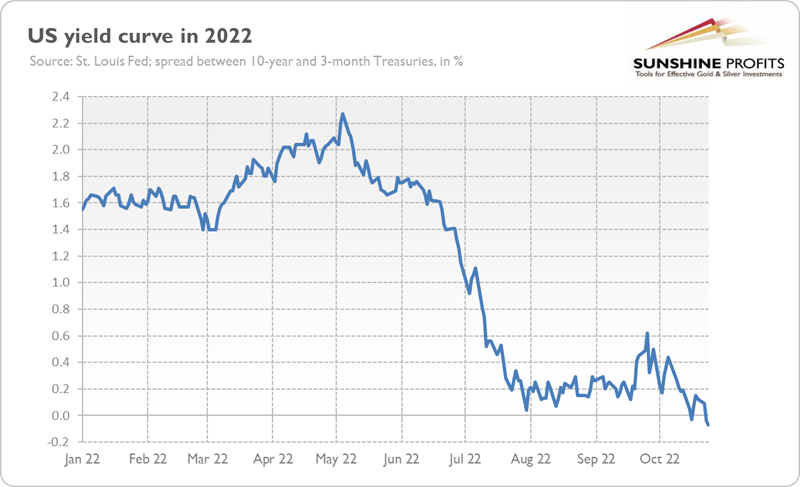 This is actually breaking news, as this yield curve is believed to be the most reliable recessionary indicator in the economic history. It's not perfect, but it's the best we have – in the past fifty years, its inversion preceded all economic downturns, without giving any false alarms. You have been warned!

What does it all mean for the gold market? Well, the looming recession is fundamentally positive for the yellow metal, especially that it could arrive before inflation recedes. In this scenario, we will have a stagflation in which gold should shine. Other positive factors are the latest ECB's hike in interest rates from 0.75 to 1.50%, which should strengthen the euro against the greenback, gold's arch-enemy, and recent expectations for the Fed's pivot (although they may be short-lived).

However, investors should remember that a recession is still a remote event. The inversion of the yield curve happens several months before the downturn. Additionally, fundamental factors don't affect gold prices automatically or immediately. They exert their influence through shaping market stories and people's narratives about the gold market, under whose influence they make decisions. What I have in mind here is that unless people are really afraid of the recession, it won't affect positively the gold market. What the gold bulls need is either a market panic or the Fed's pivot that would result in a decline in real interest rates.