Vizsla Silver (VZLA, VZLA.V) is a relatively new early-stage silver explorer that has recently up-listed to the NYSE AMEX. In 2019, Vizsla made a bold move to lock up a large portion of a historic mining district in Sinaloa State, Mexico. Although the area had seen active artisanal mining, this is the first time the entire district has been consolidated after seeing only sparse past exploration.

Vizsla's 100% controlled high-grade, Panuco Silver-Gold Project (PSGP) lies in an area along a prolific silver trend that hosts First Majestic Silver’s (AG) flagship San Dimas mine, only 80 km away. The Panuco district has a long history of mining and is approximately an hour drive from Mazatlan, which boasts a deep-sea port and an international airport.

PSGP is also comparable in size and geology to nearby San Dimas, containing more than 20 veins, several of which have demonstrated bonanza-grade silver and gold intercepts. The newly consolidated PSGP is an emerging high-grade discovery situated inside of a massive 6,754-hectare, past-producing district which contains 35 km of underground historic mine-workings.

The district-scale sized camp has substantial infrastructure, including two power lines, permits, and two paved highways that pass through the project from Mazatlan to the city of Durango. After passing through a neighboring town with a skilled workforce, tour participants were driven to several lookout points to view the project on an extensive road network.

Cumulative inferred vein strike now totals 86km, a 15% increase since work on the project began in 2019. At present, Vizsla has 9 rigs turning onsite, which goes to support the global scale, significance, and momentum of PGSP. With only 40 out of 135 identified targets having been drill tested to date by Vizsla at Panuco, three drill rigs are devoted to exploration drilling. Drilling has focused on only two of 21 vein targets tested since 2019, which is roughly five percent of the project area.

Although heavy vegetation makes exploration challenging, the company has already explored 30% of 135 prospective high-grade targets mapped by 35 geologists currently working on the project. The first two stops on the tour showed us the southern, then northerly view points for the Napoleon Vein Structure. Tour participants were shown old mine-workings, along with drill targets along the vein structure. 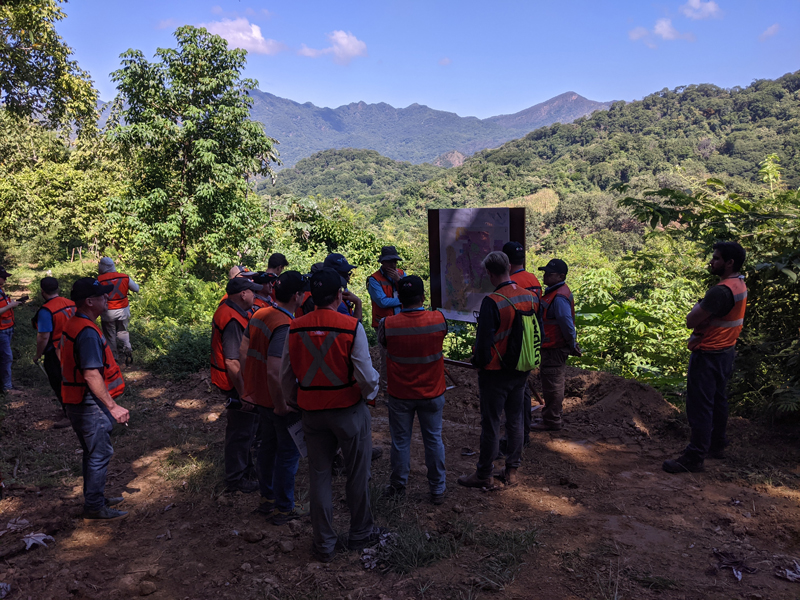 There have been high metallurgical recoveries for Napoleon, with bulk flotation results of up to 93% ag, 90% au, 94% pb, and 94% zn. There have also been low levels of impurities, with gravity separation of 29% silver and 40% gold. Direct cyanide leaching has shown up to 87% silver and 93% gold after 24 hours.

On the back of a share price explosion after several more rounds of impressive results from Napoleon, the company wisely put together a C$69M bought-deal finance at C$2.50 in mid-2021 to aggressively drill the project. Ongoing drilling continues to highlight zonation within the system, which has shown increased grades and thickness throughout the current program. Further exploration at PGSP by Vizsla led to several more discoveries of the high-grade Napoleon and Tajitos ore bodies.

In January 2022, Vizsla announced the discovery of the Copala Vein. The initial Copala resource of 25M Ag eq oz was based on eight holes. Since then, Vizsla has reported an additional 30 holes, expanding the mineralized footprint by 300 meters along strike and 150 meters down dip (to 600m by 450m). Highlights from outside the resource wireframes include 7.81 meters estimated true width (ETW) of 2,142 g/t Ag eq and 2.09 m ETW of 2,078 g/t Ag eq.

The company has also nearly completed metallurgical test work for Tajitos, with results targeted for later this month, along with met testing for Copala to commence in December of 2022. Vizsla has contracted Ausenco as QP to design and lead metallurgical testing programs.

In March 2022, Vizsla announced its maiden resource for PGSP of 107M Ag eq oz (80M oz at 517 g/t Ag eq at a 250 g/t Ag cut-off). The resource came just 18 months from the initial discovery at Napoleon and encompasses 4 km of the known 86 km of vein strike length, centering on the western portion of the project. The Mineral Resource Estimate (MRE) is based on a total drill database of 445 holes (124,915 meters) completed by Vizsla between November 2019 and December 2021.

Post MRE issuance, drilling has extended the Napoleon Vein which already contains 50% of the maiden resource. The firm has also discovered a new high-grade zone below the resource that currently measures over 800 meters along strike and 300 meters down dip, highlighted by 4.3 meters true width of 2,098 g/t Ag eq.

Vizsla recently made another new discovery on the Animas Vein Corridor at Panuco in April 2022. The Animas Vein was the epicenter of past production, while historic data suggests this corridor might be rotated north, preserving mineralization at depth. There is one drill in the area testing high priority targets.

The discovery of yet another high-grade vein within the Panuco project serves to underscore the overall prospectivity of the project, and the company's outlook toward developing multiple centers of production longer term. Although most of the proposed mining will be performed underground, tour participants were shown a few areas where small pits may eventually be constructed to extract near-surface material.

Following an aggressive infill and exploration drill program in 2022, Vizsla expects to complete an update to the resource estimate by Christmas. CEO Michael Konnet expects up to a 70% increase to the existing resource, with a 45-55% gold credit, and 5% base metal credit. The company also expects the updated MRE to support a 20M oz aq/eq per year production rate over a 10-year operation inside of a Preliminary Economic Assessment (PEA) that is targeted for release in late 2023.

Although the property also has a 500 tpd permitted mill, the company has come to realize a higher-capacity mill will be required to mine the now larger envisioned project. Also, government approval of a sub-station to be constructed by the company will be necessary to provide enough power to facilitate a 20M oz ag/eq production rate.

Although the company is financed for eight months of operations with C$11M currently in the treasury, Vizsla is in discussions to possibly raise up to C$15M before year-end. After recently cutting down the number of drill rigs on site at PSGP from 13 to 9, Vizsla's burn rate is now C$2M per month, with drilling costs being C$200 all-in per meter. Meanwhile, the total all-in exploration cost is US$0.23 per ag/eq oz discovered.

With 16.1M out-of-the-money warrants expiring in December, the company will require enough funding to finance its next round of aggressive drilling. This projected third phase of another +100,000 meters of drilling would be completed by Q4 2023, to be followed by another updated MRE in conjunction with the release of the PEA.

Full disclosure: I have recently purchased shares of Vizsla Silver stock in the open market and cover the company in the Junior Miner Junky (JMJ) newsletter.