Another jumbo rate hike, another decline in gold

The Fed delivered another 75-basis points hike. Gold didn't like the FOMC meeting and declined further.

November's FOMC gathering is behind us. It was quite boring. You know, another meeting, another 75-basis points hike…

The Committee seeks to achieve maximum employment and inflation at the rate of 2 percent over the longer run. In support of these goals, the Committee decided to raise the target range for the federal funds rate to 3 to -3-1/4 to 4 percent.

The Fed raised interest rates by that much for the fourth time in a row. It's quite impressive, given that in the last tightening cycle, they increased the rates only in 25-basis point moves. As a result, the target range for the federal funds rate is now at 3.75-4.0%, the highest level since early 2008, as the chart below shows. Thus, we can say that the interest rates have finally normalized after the Great Recession! 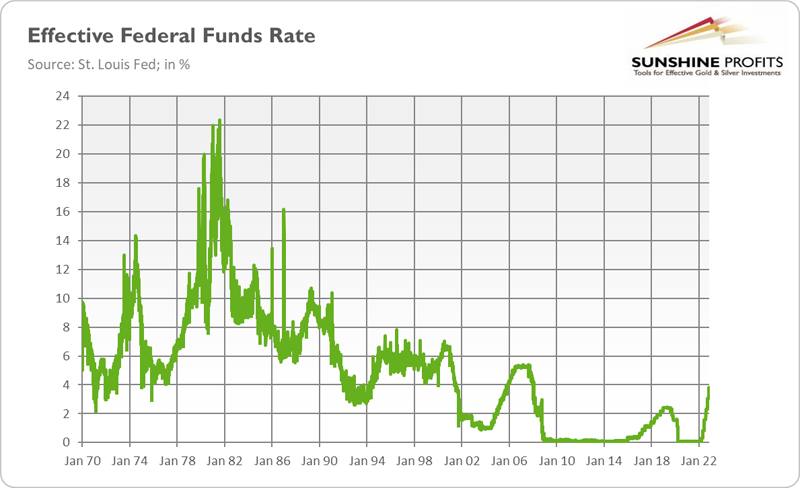 Except for another hike, the statement on monetary policy was little change compared to September. The main alteration was adding the following sentence:

In determining the pace of future increases in the target range, the Committee will take into account the cumulative tightening of monetary policy, the lags with which monetary policy affects economic activity and inflation, and economic and financial developments.

In English, this sentence doesn't mean anything special, as the FOMC didn't say anything we wouldn't have known about already. They didn't reveal anything, apart from mentioning factors they take into account in their decisions. However, in Fedspeak, the sentence means that the Fed is going to decelerate the pace of the monetary policy tightening. The key part is "the cumulative tightening of monetary policy", which signals the smaller moves in the interest rates to account for all the previous hikes, which affect the economy with an important lag. The decision hasn't been yet made, but, as Powell admitted, "that time is coming, and it may come as soon as the next meeting or the one after that". This dovish signal should support the price of gold. Actually, initially gold gained somewhat, but then hawkish Powell came and spoiled all the bullish fun.

Powell Says that Ultimate Rates Will Be Higher

The Fed Chairman admitted that financial conditions have tightened significantly and for the first time acknowledged that the Fed sees "the effects [of monetary policy tightening] on demand in the most interest-rate-sensitive sectors of the economy, such as housing." He also admitted that the window for a soft landing has "narrowed" because of the monetary policy tightening. These were rather dovish remarks, but afterwards the hawkish tone began to dominate.

Most importantly, Powell stated that "the ultimate level of interest rates will be higher than previously expected". As a reminder, at September's meeting, the FOMC participants were seeing the peak in the federal funds rate between 4.5% and 4.75% next year. According to the CME FedWatch Tool, there are now about 72% odds of rates climbing to 5% or even higher by March 2023, an increase from about 22% one week ago. Higher expected rates implies lower gold prices. 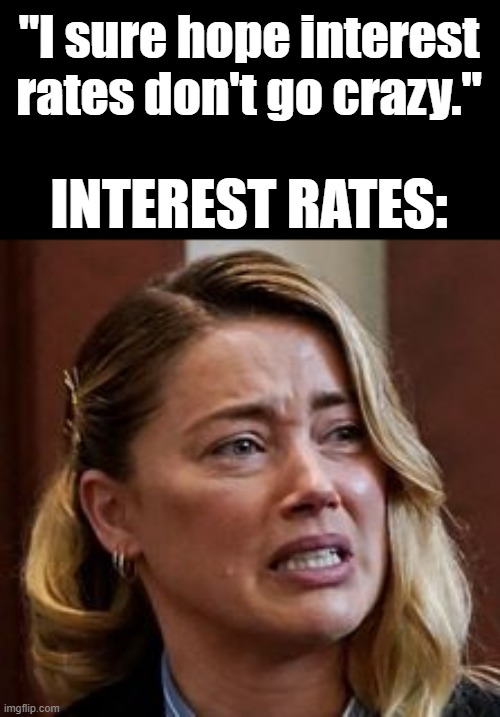 Powell also reiterated the Fed's commitment to remain restrictive in order to combat inflation: "the historical record cautions strongly against prematurely loosening policy. We will stay the course, until the job is done."

And the job is clearly not done yet, so the Fed hasn't over-tightened and it's still not the time to think about a pause in rate hikes. But even "if we over-tightened, we have … our tools … [to] support economic activity. On the other hand, if you make a mistake in the other direction … then the risk really is that [inflation] has become entrenched in people's thinking", said Powell. Hence, the balance of risks is clear for the Fed: it would be better right now to have a too restrictive monetary policy rather than an easy one. That's not what the gold bulls wanted to hear.

What does it all mean for the gold market? Well, the FOMC meeting was bearish for gold, as its price decreased again below $1,650, after an initial upward move to about $,1670. Today we see a continuation in declines, with the Comex price flirting with $1,620. All this implies that the downward trend that started in March this year (see the chart below) will remain untouched. 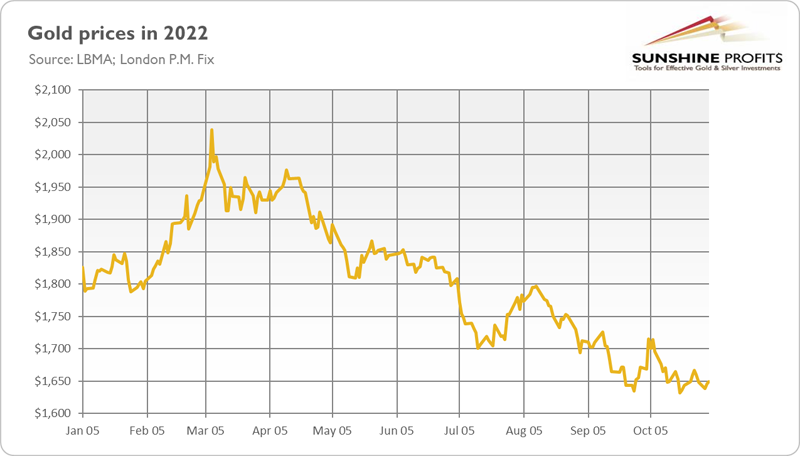 This is because there was no long-awaited pivot from the Fed. The FOMC members signaled the coming slowdown in the pace of the interest rates, but this dovish hint was more than neutralized by the hawkish message about a higher ultimate level of interest rates.

However, I believe that there is some room for very cautious optimism. What I mean here is that the Fed is entering a "fine-tuning' phases instead of a "front-loading' phase. The hikes will be continued, but we're clearly approaching a peak in the level of the federal funds rate. According to the futures markets, we'll see it as soon as in March 2023. And yesterday's move by 75-basis points could be the last such big hike.

The implication for me is clear: gold will continue its downward move for some time, but next year should definitely be better for the yellow metal, as the Fed won't be as aggressive as in 2022, and the chances of a hard landing, or a recession, are quite big – and even the central bank admits it.

Folks, on a personal note, this is the last edition of the Fundamental Gold Report, and it has been an honor and great fun to write these analyses for you throughout all these years. I'll still be writing, and you'll catch me soon, albeit with a different twist. I'm extremely grateful for this privilege and I wish you all lots of sun and big shiny profits!