On Thursday, November 11 at 8:30 EDT, the BLS (Bureau of Labor Statistics) will release the latest inflation report vis-à-vis the CPI index for October 2022.

While many analysts and market participants are expecting (hoping) that the Federal Reserve will begin a pivot from dramatic and strong rate hikes at each FOMC meeting to a pause in hikes during the first half of next year. The sad truth is that the most accurate  and current forecast is indicating that inflation remains entrenched with the CPI above 8% and the PCE above 6%.

The PCE is still three times above the Fed's target inflation rate of 2%. Americans and global citizens are acutely aware of inflation remains entrenched, persistent, and high as their data comes from the price they are paying for goods and services.

The most current and accurate data on inflation comes from the Federal Reserve Bank of Cleveland's Inflation Nowcasting. The Federal bank of Cleveland releases estimates or forecasts daily for both the PCE and CPI. The numbers and graphs listed are the latest forecasts by the Fed created today.

According to their website,  "The model relies on relatively few variables and is tested using real-time data. The model's nowcasting accuracy improves as information accumulates over the course of a month or quarter, and it easily outperforms a variety of statistical benchmarks." 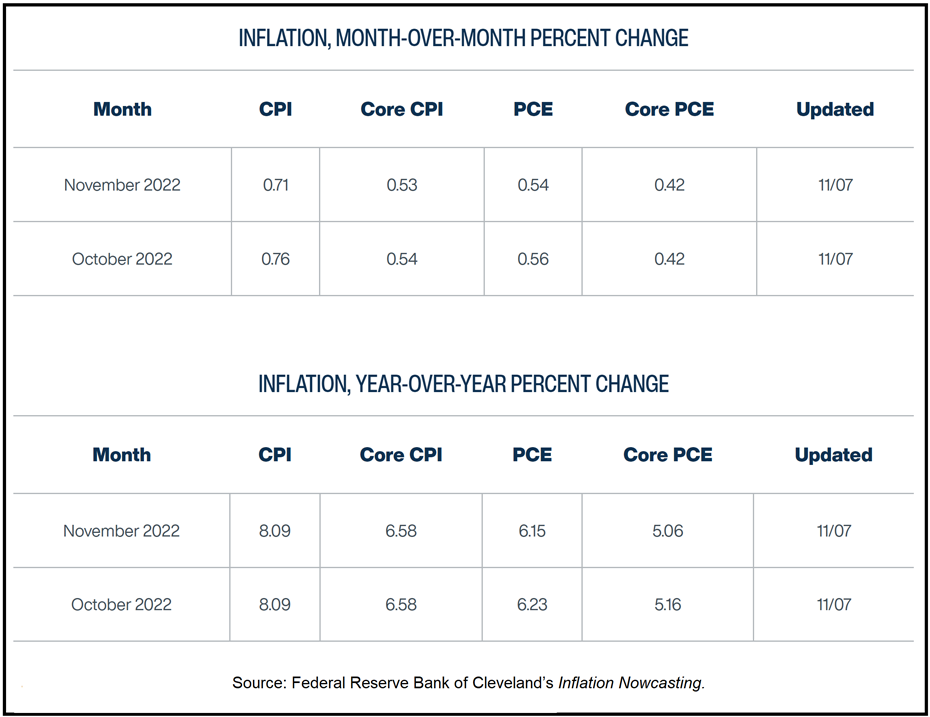 The image above is the latest figures for both November and October 2022. Inflation Nowcasting is currently indicating that the CPI (Consumer Price Index) is up 0.76% month over month for October and 0.71% month over month for the first week of November. It also shows that inflation continues to be persistent and exceedingly hot over 8% with the CPI currently at 8.09% year-over-year for October as well as November.

Gold futures are trading fractionally higher. As of 4:120 PM EST gold futures basis, the most active December contract is fixed at $1678,20 after factoring in today's net gain of $1.60. Today's fractional gain would have been a deep decline had it not been for dollar weakness moving gold into the positive today. Gold's gain was a fractional 0.10% and the dollar index is currently down 0.66% and fixed at 110.04.

The screen print above was taken at 4:41 PM EST with spot gold currently fixed at $1674.50 which is also a net decline of $-$8.20 today. On closer inspection, the Kitco Gold Index (KGX) reveals that normal trading decreased the cost of gold by $16.95, and a weak dollar added +$8.75 $resulting in today's price decline.

Regardless of what actions the Federal Reserve does at their next FOMC meeting, one thing is exceedingly clear; after five consecutive rate hikes at every FOMC meeting since March inflation according to the CPI remains above 8%. It is difficult to perceive that the Federal Reserve will begin to pause or ease interest rate hikes as long as inflation remains at a 40-year high.