Precious metals bounce is a taste of what's to come

Gold and silver prices jumped on Thursday following the release of October’s inflation data, showing that price increases slowed more than economists had expected. The dollar also dropped on the news, causing precious metals to rise (the two variables move in opposite directions).

At time of writing, spot gold was up $43.90 and silver added $0.61 to reach $21.63, as investors reacted to the Consumer Price Index’s 7.7% rise for the year ending in October, the lowest annual inflation reading since January. Economists were expecting an 8% yoy increase. September’s CPI print was +8.2%.

The US dollar, which has been climbing all year due to six straight interest rate hikes, saw a significant drop, with the dollar index DXY falling over 2 points to 108.49 — the lowest since Aug. 19.

CNN reported The stock market skyrocketed on the news, with Dow futures surging by more than 800 points on hopes the Fed would dial back its aggressive rate hikes.

Of course, the question all investors want to know: Is today’s precious metals and stock market rally a sign of Fed capitulation to the low-rate dogma stock market participants have expected from the Fed?

The first thing to talk about is whether the lower October inflation numbers will encourage the Federal Open Market Committee to slow its pace of rate increases to half a percentage point (+0.5%) at its next meeting.

Clearly, not enough time has elapsed for the Fed to feel confident to stop raising interest rates, let alone lower them. The only question in my mind is whether it will be +0.5% or +0.75%. According to CNN, Fed funds futures are now pricing in a nearly 80% chance of a half-point increase…

The Fed will be guided by November’s inflation numbers which are scheduled for publication before the next FOMC meeting, on Dec. 14.

“[I]t’s unlikely that the Federal Reserve will be perted from its rate-hiking path, even if it slows the pace in December,” Tatiana Darie, Bloomberg Markets Live analyst and leveraged finance reporter, wrote in an editorial covered by Zero Hedge.

This leads into the next question: Has inflation peaked? While the chart above shows inflation topping out in June at 9.1%, and falling every month since, we have to be careful in declaring this a trend. Especially since the inflation figures being followed by the Fed are different from the broader CPI index.

Allow me to explain. In deciding whether to raise or lower interest rates, the Fed prefers to go by, firstly, the personal consumption index (PCE), and the core CPI, which strips out volatile food and energy prices. Both are currently tracking above the 4.5% median in the FOMC’s latest projections (6.3% for core CPI in October, and 6.2% for PCE in September. The core PCE, released on Oct. 28, which also excludes food and energy, was 5.1%). 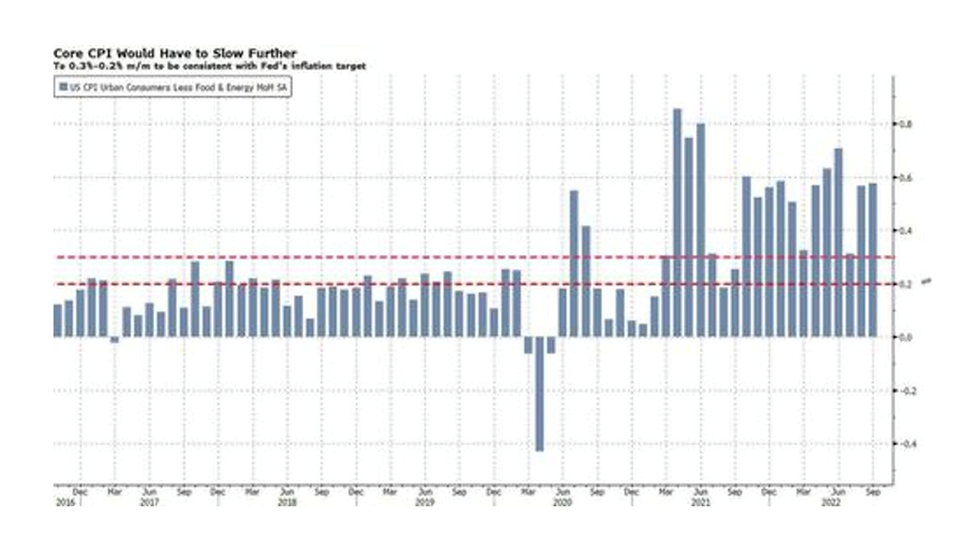 Indeed the pervasiveness of price pressures is problematic, and it will likely take two or more months of decreases for the Fed to consider pivoting from hawkish to dovish, meaning lowering interest rates and returning to its program of sovereign bond buying known as quantitative easing, or QE — that would be great for gold and silver – more on why below.

“Any meaningful relief for household budgets is still somewhere over the horizon,” Greg McBride, chief financial analyst at Bankrate, was quoted by CNN.

“The areas posting declines are for the most part either irregular or more discretionary in nature — airfare, used cars, and apparel,” he added.

Meaning all the stuff you buy on a daily basis is still going up, while the stuff you occasionally buy, and can do w/o for much longer periods, is going down – households are increasingly having to discipline themselves into discretionary spending versus essentials.

As mentioned the Fed has raised its benchmark interest rate six times this year, including four consecutive 0.75% raises, to try and get ahead of inflation now running at 7.7%. But at 7.7%, the official rate is more than three times as high as the Fed’s normal 2% inflation target, suggesting more rate hikes are likely to come.

Personally I think the Fed may be forced to accept an inflation level higher than 2%, say 3%, precisely because food and energy are being left out of the official inflation rate, and because these are among the items that are becoming most expensive.

Surely for the broader CPI to fall substantially, food and energy costs must decline, but when I look at the energy crisis in Europe, UK food prices exceeding 10%, and OPEC’s 2 million barrels a day production cut keeping oil prices strong, I have my doubts whether this will happen anytime soon. Oil prices jumped on Thursday due to a lower US dollar, which boosted crude demand for holders of non-dollar currencies.

In our May 12, 2022 article, we identified five reasons why food will continue to get more expensive, and has: Soaring Fertilizer Prices; Lower Crop Yields; Rising Energy Prices; War in Ukraine; Monetary Policies & Stimulus Spending.

5 reasons why food will get more expensive

In Europe, historically high natural gas prices due to Russia’s severe NG export cutbacks, have forced shutdowns at energy-intensive businesses including steel and chemicals. Governments are reportedly issuing more debt to shield households and businesses from pain, and there are growing projections the energy crisis will spiral into a recession.

According to the New York Times, Underground storage sites around the continent have been fully stocked with emergency gas supplies. Nuclear power plants slated for closure in Germany will stay open. From France to Sweden, thermostats are being lowered to just 19 degrees Celsius, or 66 degrees Fahrenheit. Slovakia is even urging people to limit showers to two minutes.

We also have to remember the toll, that the combination of high inflation and high interest rates is having on the average person. Many have got to the point where they’re living on their credit cards, in effect borrowing to keep spending, going ever deeper into debt.

A new study quoted by Global News found Canadians are leaning more heavily on credit cards, amid higher inflation and despite rising interest on credit cards. Equifax Canada’s survey found the average credit card held by Canadians as of Sept. 30 was at a record-high $2,121.

Each interest rate rise means the federal government must spend more on interest. That increase is reflected in the annual budget deficit, which keeps getting added to the national debt, now standing at a gob-smacking $31.2 trillion.

Considering that egregious over-spending with annual deficits exceeding $1 trillion is likely to continue, the question is who will fund the higher interest costs? The answer is investors, foreign and domestic, who buy US government bonds and notes, issued by the Treasury Department to fund government expenditures.

The problem is that right now, just about everyone is fleeing Treasuries, including emerging markets. Read more

The Fed, the debt, China and gold

If the regular buyers of US debt continue to stay away, it will fall to the lender of last resort, the Federal Reserve, to step in.

The key point is, the Fed can only push interest rates so high, without blowing up the Treasury and being forced into an aggressive bond-buying program (QE), thus accelerating inflation. The irony is that in trying to bring down inflation through interest rate hikes, the Fed, because of the high debt levels, will fail, and will be forced into a loose monetary policy involving interest rate cuts and QE.

In my opinion, precious metals’ positive reaction to lower inflation backs up what we’ve been saying about commodities for quite some time. It’s a prelude to what will happen across the entire commodities spectrum when the dollar finally weakens after months of strength.