They Don’t Ring a Bell at Bottoms

The evidence argues that the cyclical bear market in precious metals is likely over.

We will only know for certain once prices are much higher. Such is the reality of markets. Therefore we need to rely on the weight of the evidence.

The evidence was already building even before prices turned. We noted such in missives in September here and here.

The technicals by themselves make a good case.

The weekly candle charts are below; note the thumbnail (right) highlighting the last four months of trading.

The most important observations are Gold's failed breakdown and Silver, and the gold stocks (GDXJ as our proxy) hit their low before Gold.

The first hint that Gold's breakdown would fail was Silver failing to trade lower amid the breakdown. Silver made its low on September 1st, two months before Gold's low at $1618.

Gold made its intraday low on November 4th, while Silver and gold stocks were well above their lows. 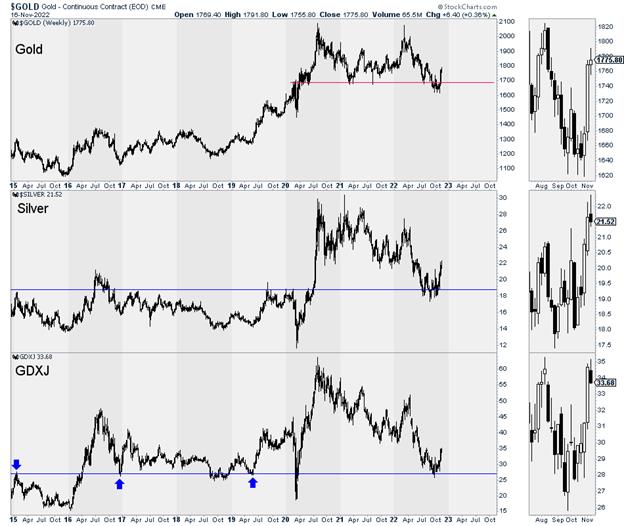 The only bugaboo I have is Gold’s net speculative position as a percentage of open interest fell to only 13% and not near 0% like at the 2015 and 2018 lows.

However, open interest experienced its second-largest decline in the last 20 years, reaching a three-and-a-half-year low. So who is to say the net speculative position has to fall below 10% and that 13% is not low enough? 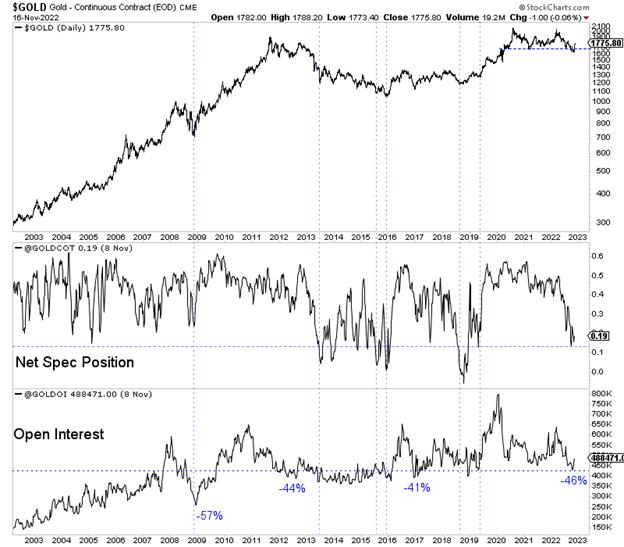 The Fed's shift to a pause may take a few months, and because Gold did not plunge towards the $1500s, it seems unlikely that future performance reflects a V bottom.

The rebound in precious metals should gain more traction when the Fed is officially done hiking rates.

This is one of the best and most ideal times to be a speculator in this sector. High-quality juniors are trading near their lows; the sector is hated yet may be at the start of a major turn.