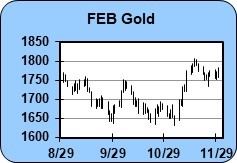 The gold market rally is impressive this morning, seeing it happen without definitive weakness in the dollar should embolden the bull camp. The dollar is tracking lower, but it has not forged a new low for the week in the early going. Gold and silver are apparently being thrust higher on expectations that the US Federal Reserve is likely to slow rate hikes, possibility beginning with the December 14 meeting. With US Treasury yields near two-month lows and the dollar near a downside breakout, outside market forces should underpin the metals and facilitate even higher prices ahead. The spec and fund net long in gold has jumped nearly 100,000 contracts since September, but it remains more than 200,000 contracts below the high for the year. Similarly, the silver net long is 42,000 contracts below the 2022 high. We expect the inverse relationship between the dollar and precious metals to intensify into Friday’s close. US economic data released yesterday signaled some softening, which should moderate hawkish Fed sentiment somewhat. In the end, the bull camp in gold and silver needs a "Goldilocks" job report on Friday to weaken the dollar without fostering recession or deflation inspired selling. It should be noted that gold and silver ETF holdings (particularly silver) have posted a series of inflows over the past two weeks, which suggests that investors are turning more bullish. However, for gold to come fully into vogue, it will probably require a close in the Dollar Index below 105.00. Even though the market has been hesitant to embrace flight to quality interest over the past several years, labor problems/strikes in South Korea and widespread Chinese protests over extreme Covid restrictions could result in renewed supply chain problems, which could rekindle inflation around the world. It appears that the Chinese government caved to protests by relaxing restrictions in two major cities, but aggressive action by the central government against citizens could result in a significant jump in gold demand in mainland China via Hong Kong. On the other hand, some financial analysts yesterday indicated the Fed could still implement a jumbo rate hike later this month following a hotter than expected core personal consumption expenditure reading in the GDP report yesterday. We would expect the markets to be very surprised if the Fed continued to raise rates aggressively, and it would firm the dollar and dump gold. Silver on the other hand is showing impressive chart action and positive divergence with gold. Perhaps it will continue to draft support from the Silver Institute forecast for a supply deficit.

Seeing March palladium slide aggressively from the mid-November high on a jump in trading volume and a significant decline in open interest suggests the market has balanced its technical readings and has potentially forged a key bottom at the $1,800 level. The market remains spec and fund net short, and it has respected the $1800 level on five occasions this year. Like gold and silver (but to a lesser degree), the PGM markets should benefit from less hawkish guidance from the US Federal Reserve. However, we think both palladium and platinum prices saw most of their lift yesterday from news that China had reduced activity restrictions in two major cities. However, Chinese officials have indicated they will act aggressively to ensure national security and will quell civil unrest aggressively. With labor problems also surfacing in South Korea, the prospect of supply chain problems for the automotive industry has returned and could reduce demand for auto catalyst inputs. While the markets have heavily discounted a forecast from Russia's Nornickel calling for a global palladium deficit of 600,000 ounces this year and deficit of 800,000 ounces next year, the flow of PGM supply from Russia remains at risk. Russian supply has worked its way onto the world market, but talk of biological or tactical nuclear weapon use by Russia in Ukraine would likely shut off that flow. Critical support in March palladium comes in at $1801, with downtrend channel resistance today pegged at $2,042. While palladium prices sit near multi-quarter lows and close to consolidation low support, January platinum sits very high in the recent trading range and near the top of an uptrend channel. However, January platinum forged yesterday's sharp range up extension on significant trading volume and an increase in open interest, which suggests traders view $1000 as cheap. Unfortunately for the bull camp, significant gains over the past four trading sessions leave little in the way of close-in support. First support today is pegged at $1018.50.

MARKET IDEAS: We think gold and silver traversed a major junction this week with the direction of prices heavily dictated by the action in the Dollar Index and the markets potentially shifting their focus toward interest rates. Over the last several weeks, three Federal Reserve Bank boards recommended smaller discount rate hikes, which undermined the dollar throughout the month of November and helped underpin gold and silver. Despite what some analyst interpreted as a hawkish Fed chairman speech yesterday, the Dollar Index fell sharply, in a sign that the currency trade is looking beyond the December FOMC meeting. In the near term, pivot point support (allowing for jobs-related volatility) is $1,770 in gold, and we suggest stops on longs be placed at $1,732. For those long March silver, we suggest placing stops at $21.33 with a key pivot point today seen at $21.81.