Both gold and silver had stellar performances this week. This week the precious metals moved on both the jobs report and chairman Powell’s speech on Wednesday.

Gold futures opened today at $1817 and traded to a low of $1791.80 before substantially recovering. As of 4:00 PM EST, the most active February 2023 contract is fixed at $1812.20 after factoring in today’s price decline of $3.10. Silver futures basis the most active March contract opened at $22.975, traded to a low of $22.48, and is currently fixed at $23.37 after factoring in today’s gain of $0.529 or 2.32%. The primary reason that gold had a fractional decline and silver had a solid gain was today’s jobs report which was bullish for silver and slightly bearish for gold.

However, the weekly gains in both gold and silver reveal a more complete story, with the precious metals reacting to an abundant amount of the major events this week. Gold futures opened on Monday at $1756 and is currently fixed at $1812.20 posting a weekly net gain of approximately $56 or 3.189%. Silver’s performance was even more stellar this week opening at $21.52 and is currently fixed at $23.365 resulting in a weekly gain of approximately $1.85 or 8.66%. 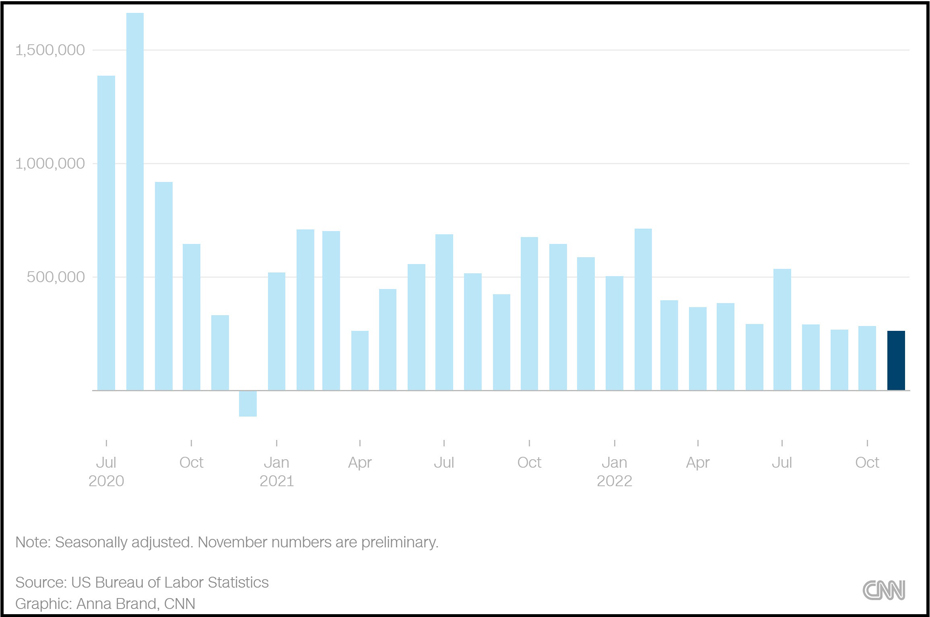 By far the largest factor moving the precious metals this week was Wednesday’s speech by Chairman Jerome Powell in Washington. The jobs report could have a nuanced effect on the Federal Reserve’s upcoming rate hikes as well. Last month resulted in 263,000 additional jobs.  Although this is the lowest number since December 2020, November’s additional jobs came in well above forecasts. Economists surveyed by Refinitiv predicted that only 200,000 new jobs were added last month. The unemployment rate remained at 3.7%. The report revealed that the labor market continues to be extremely tight resulting in a smaller number of individuals being hired for holiday employment. The report will also factor into the decisions of Federal Reserve members as they meet this month for the last FOMC meeting of the year. Gold traded fractionally lower, in response to today’s nonfarm payroll jobs report.

Technical evidence now supports the fact that market sentiment for gold had a major shift expressed in the charts as a reversal from exceedingly bearish to bullish beginning in November. The chart above is a daily candlestick chart of gold futures.

November 3 marked the beginning of a major rally in gold. After trading to a low of $1621 gold prices have surged to a high of $1818.70 today. This has resulted in gold prices gaining approximately 10.54% in the last month.

We have also created a Fibonacci extension to forecast where gold prices could go by the end of Q1 - Q2 2023. This was created by measuring the price gains from the low of $1621 on November 3 to the high achieved in mid-November at $1791.30. We then began a Fibonacci extension from the minor correction that occurred towards the end of November when gold prices sold off to a low of $1719. Based on this study we are predicting that gold could trade as high as $1955 by the middle of 2023.

The largest takeaway from recent changes in the price of gold is that the rally which began on November 3 is signaling that a major pivot of market sentiment by investors in both gold and silver from bearish to bullish took place. Our technical studies presented today indicate that it is likely that that rally will continue not only through the end of this year but into the first half of 2023.