When on occasion Gold grabs the steering wheel as it did this past week, we're told to "Get in, fasten your belt, shut up and hang on!" Especially so when Gold has just filled up with premium.

For there's nothing like +15 points of price premium "added" to Gold's tank with volume rolling (in this past week's case) from the December '22 contract into that for February '23. Such premium in turn brought that which we trade (i.e. the price which the COMEX has "made") to settle the week yesterday (Friday) at 1811, Gold's first weekly close above 1800 since that ending 12 August. (Comparatively sans premium, spot settled yesterday at 1797). Yet by either measure, Gold gained (premium-aided) a net +56 points or +3.2% for its fourth-best week of this year; (and spot its sixth-best with a net +42 point-gain or +2.4%). Now obviously the futures' premium will erode toward spot by the contract's February expiry; but should the price of Gold materially rise, one does not give a derrière du rat.

Moreover as you regular readers know, given Gold now being on a Long weekly parabolic trend, in the vacuum of historical averaging we can see price on this run reaching above 1900, albeit the 1800's are structural resistance as encircled on the following year-over-year graphic of the weekly bars:

Similarly (it being month-end plus two days of December trade), here from one year ago-to-date we've Gold's percentage track along with those of the following high-level metals' equities: Franco-Nevada (FNV) +12%, Agnico Eagle Mines (AEM) +8%, Gold itself +2%, the VanEck Vectors Gold Miners exchange-traded fund (GDX) -2%, Newmont (NEM) -9%, the Global X Silver Miners exchange-traded fund (SIL) -18%, and Pan American Silver (PAAS) -27%. Mostly negatives to be sure, but not as severe as we saw when measured to October's end a month ago:

Too, 'tis time again to review the BEGOS Market Standings year-to-date. And whilst not technically a BEGOS Component, the Dollar has finally replaced Oil at the top of the stack. Note as well that Sister Silver has edged ahead of Gold, but both are basically "unch" through these 11 months (plus two days). The Bond remains the cellar dweller, (but at least you get your dough back):

"As the Fed'll have the Treasury's back, right mmb?"

Brazenly breaching the border of default there, Squire. Which brings us to this from a valued reader:

Question: Do you feel that there will be a large devaluing of the dollar over the next few years that will hurt most of the other financial markets and allow gold to be the only survivor so to speak?

Response: Yours is the question of a generation. Answered by this question: "Who the hell knows?" As the Investing Age of Stoopid rolls along, all that we've economically learned and have rightly experienced in prior decades no longer works. The supply of Dollars (M2 basis) has doubled in just under 10 years … and yet it is the firmest of the bunch these days … So against what might the Dollar become devalued? The Ruble? The Yuan? The Rupee? At the end of the day, all these fiat faux currencies are B.S. They'll only last as long as there's faith in using them, which could be beyond our lifetimes … Annualized 4% yield on 3-month U.S. debt seems a safe bet. Even if Yellen's Treasury faces default, the Fed'll bail her out. (How's that for a Gold positive?).

But not very positive were the Economic Barometer's set of 16 incoming metrics this past week. At best, they served to quell the sudden plunge of the prior few weeks. Amongst the improvers (albeit inflationary) were November's Hourly Earnings, October's Personal Income and Spending, plus Pending Home Sales, and the first of two revisions to Q3 Gross Domestic Product. But decliners included slowing growth for November's Payrolls as measured by both ADP and the Bureau of Labor Statistics, the length of the Average Workweek, the Chicago Purchasing Managers' Index, the Institute for Supply Management's Manufacturing Index, the Conference Board's read on Consumer Confidence, plus October's Construction Spending.

But wait, there's hope, as the Federal Reserve's favoured read on inflation (Core Personal Consumption Expenditure Prices) dropped from September's 0.5% pace to only 0.2% during October. No better put than by The Man himself, U.S. President Joseph Robinette Biden Jr., that this is "further evidence that my economic plan is working." Awesome! (But don't make mention of the inverted yield curve). Here's the Baro:

Meanwhile amongst the past week's FedSpeak came New York FedPrez John "It's All Good!" Williams suggesting inflation even a year out into 2024 as being above 3%. Thereto, Chair Jay "It's Ok!" Powell inferred a slowing in his Bank's Funds Rate increase pace as soon as the 14 December Policy Statement, but that nonetheless toward more broadly bringing inflation back down to 2% implies having a less lively labor market.

So: Does slowing the interest hike pace mean 'twill take longer for the Fed to see its inflation goal? Or is Jumpin' Joe's economy (per the above Econ Baro) already on the skids? In either case, not to worry, for to paraphrase Men Without Hats from 40 years ago in '82 "We can shift if we want to... We can leave pivots behind..."

Let's next pivot 'round the horn for all eight BEGOS Markets across the past 21 trading days (one month) wherein we see positive correlation is "The Name of the Game"--(ABBA, '77) with every component except Oil having shifted to the upside. The baby blue dots are indicative of each grey trendline's consistency, for which the Bond -- indeed the most consistent of the bunch -- can quote Mark Twain's 1897 quip that "The report of my death was an exaggeration": 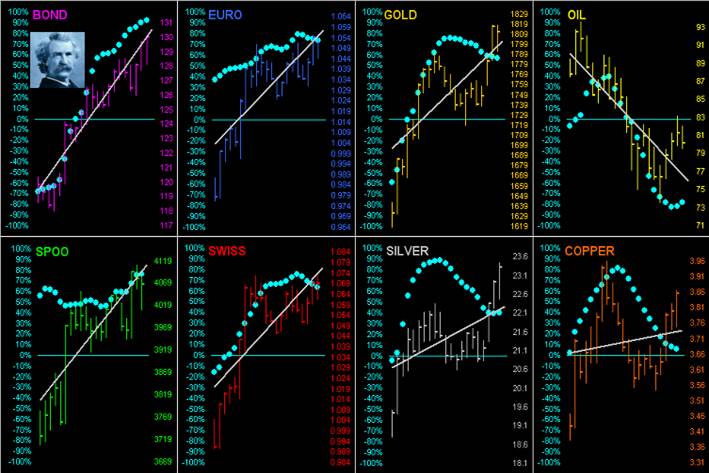 And our 10-day Market Profiles for Gold below left and for Silver below right certainly see their respective prices having shifted into top gear. No pivot here, (as long as Gold can stay above its dominant trading apex of 1766, the same for Silver being 21.40):

Finally, with November in the books (plus the rightmost wee nub for the first two trading days of December), we substantively see per Gold's Structure the ongoing battle at The Northern Front, with price poised to make a run up through The Final Frontier toward retaking 1900 (as earlier suggested per the weekly bars' parabolic Long trend). Regardless, how arduously annoying 'tis for price to still be where 'twas nearly 12 years in arrears! 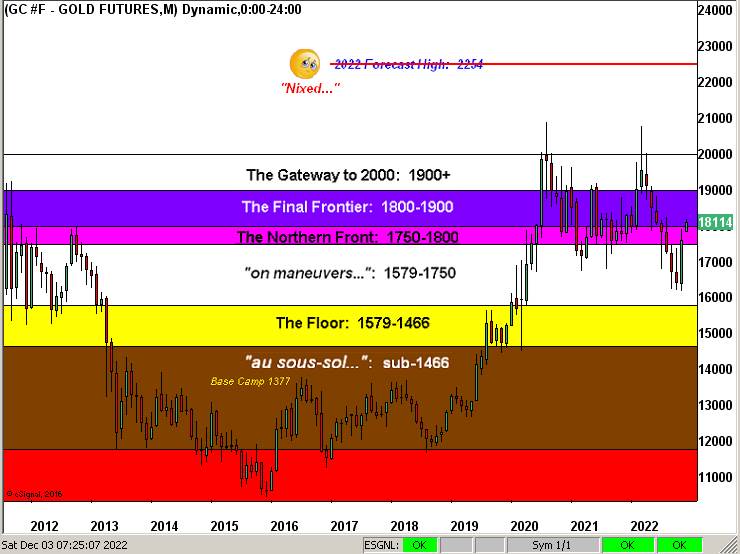 Let's wrap with this. The next named Chicago FedPrez is ... (wait for it) ... Austan Goolsbee! Further, he'll have a seat on the Federal Open Market Committee. Politics aside, ya gotta love "The Gools". Back in the States we'd periodically see him pop up -- and get pounded -- in televised debate panels. But at the very least, his happy-go-lucky nature might bring some much needed mirth to the FOMC. We'll see...

And that's yet another Gold positive! So get on the gas and get some Gold and Silver too!