The bulls retain the edge unless the Fed provides a surprise 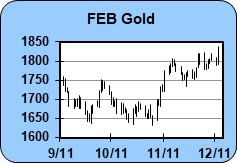 With the gold market this morning sitting near the highs of yesterday’s upside explosion, bullishness remains in place. The dollar has not posted a lower low today, but the index sits just above the downside breakout point, leaving negative charts and widely anticipated pressure expected from the Fed decision this afternoon. While it might be premature, a paradigm shift may have taken place in the precious metal markets. After a sustained wave of aggressive rate hikes, it appears the US Federal Reserve has the justification to become more measured in their tightening. With the added windfall of the softer CPI report rekindling the downtrend in the dollar, it appears that the bull camp in gold and silver has seen their case broaden to multiple themes. However, the Fed is still widely expected to hike rates 50 basis points today, and they may attempt to keep inflation expectations anchored by suggesting the battle will continue until a broad section of price measures have come down. Today's Fed statements could result in a short-covering bounce in the dollar and a profit-taking dip in gold and silver prices. On the other hand, the gold and silver rallies yesterday were very impressive, and they were forged on jumps in trading volume. The trends have shifted up in gold and silver, but fresh longs should wait for a correction today off the Fed announcement to enter the market.

While palladium and platinum are showing divergence this morning, both markets should derive support from yesterday's news that October South African PGM output declined 32.5% from year ago levels. We see palladium as mostly immune to Fed action later today, as prices have not inflated recently, and the market retains a spec and fund net short, but we do see platinum in the line of fire. We are a little surprised that palladium showed as much sensitivity to the US CPI report as it did, as the contract forged a wide trading range of $23 yesterday, only to finish in the middle of the range. The softer US CPI reading should be supportive of palladium, but the status of the Chinese infection situation and their willingness to reopen portions of their economy should have a much bigger impact. Yesterday's wide range was forged on a modest increase in trading volume that equaled the largest daily volume since November 28. At this point we are not impressed with the bullish prospects for palladium and suggest the March contract could fall back to consolidation low support at $1,839. On the other hand, seeing it trade above $1,955 could be the catalyst to force some spec and fund shorts to the sidelines. While the platinum market also forged a wide trading range yesterday, it managed to retain a large measure of the rally and had its third highest close since early March. Reports of increased road congestion in China and a further lessening of Covid restrictions (regarding international travel) should thicken support at $1,000 and increase the potential for January platinum to establish consistent trade above $1,050.

MARKET IDEAS: While the softening in US consumer price inflation might not justify a sustained drive higher in gold and silver, the report yesterday does suggest a paradigm shift in the financial markets and most specifically the dollar. The CPI report appears to have sparked a resumption of the downtrend pattern in the Dollar Index, and that should provide tailwinds instead of headwinds for gold and silver. However, February Gold this morning sits right on its 200-day moving average, which suggests a technical trend decision is in the offing. Uptrend channel support today comes in at $1797.70. While the rally in silver prices yesterday was extreme, the March contract held the gains overnight and appears poised to forge higher highs ahead. Uptrend channel support in March Silver today comes in at $23.15. 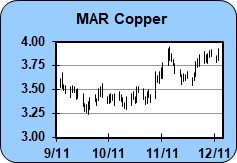 Even though March copper exploded yesterday and briefly rose above the 200-day moving average ($3.9190) the market gave up more than half of its initial rally. However, it is higher this morning despite headlines from Beijing indicating that Covid cases have exploded there. On the other hand, portions of the trade continue to expect China to support its economy with an infrastructure push. A 2023 Copper Outlook paper from Bloomberg overnight projects a balanced market, with demand not expected to recover until the second half of the year. However, others suggest that increased environmental pressures on copper producers will result in new and complex production techniques that will result in higher production costs and delays in supply flows. Buyers were motivated yesterday in the wake of a softer than expected US CPI report and perhaps from the removal of additional Chinese Covid restrictions. However, seeing China relax some international travel rules is hardly a significant development for copper demand. Earlier this week the market was presented with a jump in Chinese weekly home sales and strong performance in Chinese property sector shares, and that should help offset troublesome Chinese infection headlines.

MARKET IDEAS: Given this week's events in China, the downtick in US inflation, and signs of a redeveloping downtrend in the dollar, we suggest that the $3.80 level is becoming firmer support. However, there are reports that a Chinese web application documenting daily infections was taken down and that the government is apparently no longer counting asymptomatic cases, which seems to show they are willing to accept a surge in infections. While the lessening of restrictions could help Chinese copper demand improve at some point, reports from CNN overnight suggest the streets and shopping centers in Beijing are deserted, which signals an economy facing significant adversity. Uptrend channel support in March Copper today comes in at $3.8230, and the 200-day moving average sits as resistance up at $3.9015.