What can stop gold now?

In our last article, we noted that Gold is outperforming everything.

It is trending higher and positioned above rising 200-day moving averages when charted against the stock market, bond market, commodities, and foreign currencies. Yesterday it closed at a fresh two-year high against the conventional 60/40 portfolio.

To be sure, on a technical basis, nothing will be able to stop Gold when it breaks to a new all-time high. Such would confirm the most significant Gold breakout in roughly 50 years.

However, I am more focused on macro-fundamental developments that could stop Gold today.

I don’t see anything.

Consider the negatives Gold has dealt with over the past year.

The Fed has raised rates at the second most aggressive pace in history.

The US Dollar Index surged almost 30% in 17 months.

The real 10-year yield gained more than 2.50%. It was the largest move in the history of the TIPS market. 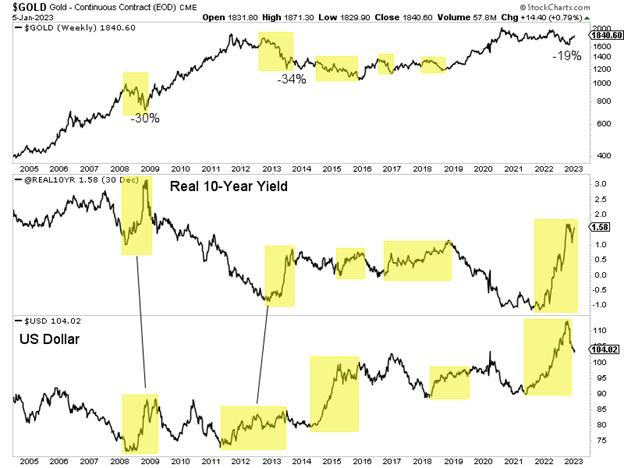 Various investors think the stock market will dump lower and take Gold with it.

This thought is based not on hard data or objective facts but on emotion.

First, we must remember that precious metals typically bottom around 11 to 12 months (at the latest) after the stock market peaks. The market is beyond that point, and Gold and gold stocks have already bottomed after a two-year-long correction.

Second, up until 2008, Gold had risen every year for seven years. At present, Gold is coming out of an 11-year-long secular bear market. The amount of capital in precious metals today is dwarfed by 2008.

Coincidentally, those downturns marked the start of secular bear markets in the S&P 500 and secular bull markets in Gold.

The stock market would lose its 40-month moving average (low 3800s) during the next leg lower. As I have shown in the past, that is a powerful signal of the start of a new secular bear market.

The vertical line in the chart below showed when the S&P 500 lost its 40-month moving average after the start of those secular bears. That is exactly when a bull market in precious metals can begin. 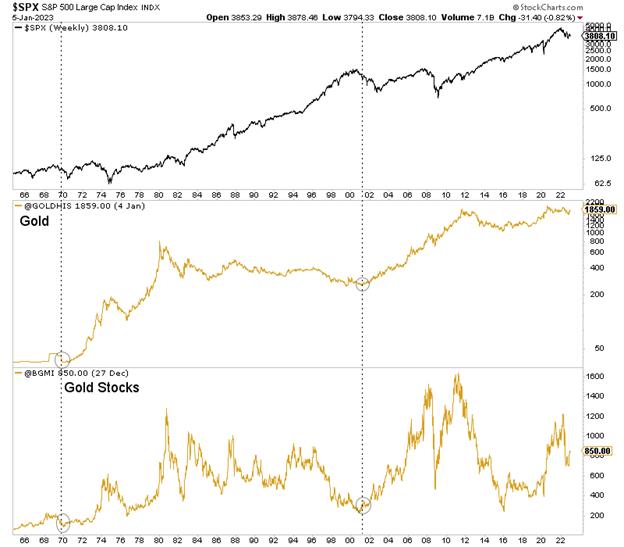 Gold has taken every blow (surging dollar, surging real interest rates, and aggressive Federal Reserve) yet is outperforming everything and is barely more than 10% from an all-time high.

Despite strong bearish fundamentals, Gold has held up amazingly well.
This is an extremely bullish development, lying under the surface.

There will be corrections along the way, and Gold will have to chew through significant resistance from $1870 to $1950. But aside from that, there is nothing that will stop it.