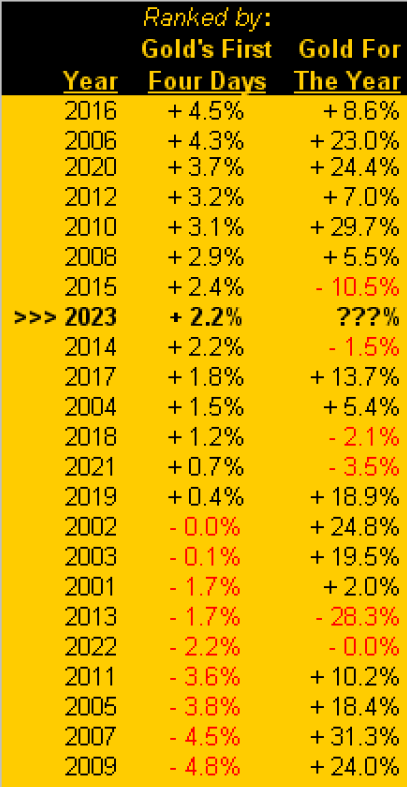 Thus Gold's 2023 start ranks eighth-best from 2001-to-date; but hardly is it predictive of an "up year" as made clear by the negative red percentage years on either side; 'course 2014 and 2015 are best remembered (or perhaps better stated "forgotten") as Gold's tragic finale, its dénouement of decline following "price having gotten ahead of itself" as we so presciently penned back in 2011.

But 12 years hence today with Gold priced where it was way back then, we instead anticipate our yellow metal shall record an up year for 2023 if for no other reason than 'tis rationally impossible to make a properly-vetted case for a down year. Yet as you herein read a week ago (and as denoted in the above opening Gold Scoreboard), we're not staking claim as to how high 2023 Gold shall fly. To reprise: "...should the Gold trade continue as arguably suppressed by those schemingly shifty sovereign/central bank scalawags, 'tis presently unwarranted to make a forecast high for 2023 ... And yet should 'they' at some point decide to release the hounds, just make sure you've 'Got Gold!'..."

No forecast aside, that doesn't preclude us from pointing out on occasion as the year unfolds key overhead levels that Gold can capably achieve, and likely so should this be an "up" year. After all, with price setting settling yesterday (Friday) at 1871, 'tis only -10% below the All-Time High of 2089 recorded on 07 August 2020. And given Gold's EYTR ("expected yearly trading range") for 2023 is 346 points, were the low (1830) already in place, the high for this year in that perfect vacuum becomes 2176, (just in case you're scoring at home).

Too as we mentioned a week ago, upon the All-Time High of 2089 being surpassed, one may cue the Fibonacci Crew to determine how high is high. Yet with Fib being based on natural herd push, if still lacking such, Gold may just sit on its tush.

Nonetheless, 'tis a welcome start to the year for Gold. And as we turn to its weekly bars from a year ago-to-date, we see the rightmost blue-dotted parabolic Long trend having now completed its ninth week. As written back at the trend's onset, Gold (based on historical Long trend follow-throughs) can reach 1900 on this run. And again for you home-scorers, should Gold top 1883, 1900 looks probable to trade: 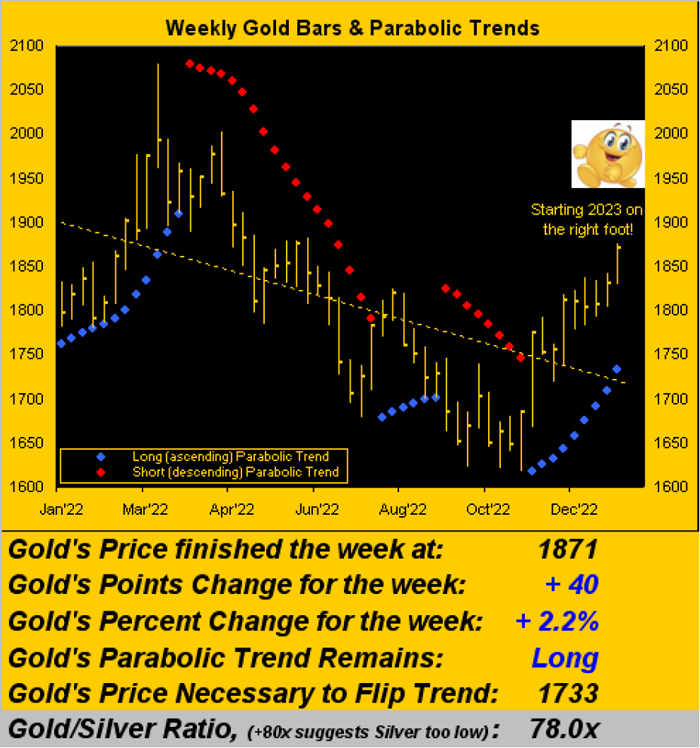 However on an immediate note, Gold is notably "high" vis-à-vis its smooth valuation line by the oscillator (price less valuation) next shown per the lower panel, the deviation being +89 points as noted in the right margin. Except for the RUS/UKR spike n' fade early last year, the current deviation has been fairly stretched relative to the oscillator's prior extremes, be they high or low: 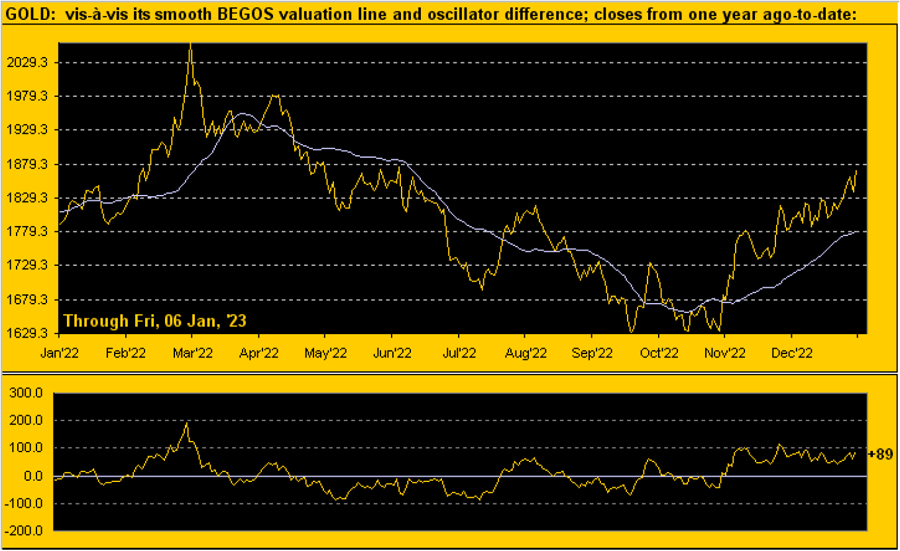 The above valuation excludes the vital 3Ds of Debasement, Debt and Derivatives. Rather 'tis based on Gold's movements relative to the four other primary markets that define BEGOS (Bond / Euro / Gold / Oil / S&P), and is updated daily at the website.

Also speaking of "high", 'tis high-time we updated our graphic of Gold by the day from better than 11 years ago-to-date, notably as price (1871) has again penetrated above its 300-day moving average (1806). Should Gold record another top near 2100 -- even then pullback --- remember the old trader's theorem that "Triple Tops are Meant to be Broken". So let's first establish a fresh top, and then on verra:

As to a quick snapshot of our BEGOS Markets' start to the year, here they are (the Dollar not technically a BEGOS Market, but its "faux-strength" such a popular issue that it gets included in this stack). Note Gold's third place podium position at present:

Elsewhere economically, what does International Monetary Fund Managing Director Kristalina Georgieva see in common with the high-end global banking community, and even with 96-year old Alan "Print that Green!" Greenspan? Recession! Indeed we read that the Organisation for Economic Co-operation and Development is calling for "extreme care" being taking by pension funds with regard to liquid asset exposure, (which for you WestPalmBeachers down there basically means to get the hell outta the stock market).

Moreover, we've this (to which we alluded some weeks back) being problematic for today's investment banker, the average age of whom is (hat-tip Zippia) an experience-lacking 42. To wit, come 1987's Black Monday, today's investment banker was but six years old; and at the DotBomb bottom, a mere pub-crawling 21-years old. "Yeah, but we know later from the financial crisis it always comes all the way back":

Awkwardly to segue from the investment banker to the central banker, in the midst of the past week's FedSpeak, St. Louis FedPrez James "Bullish" Bullard noted that (per Dow Jones Newswires) "...The Federal Reserve’s short-term benchmark rate isn’t yet at a level high enough to sufficiently slow the U.S. economy to combat high inflation..."

Query: Does it look to you like the economy need be sufficiently slowed? 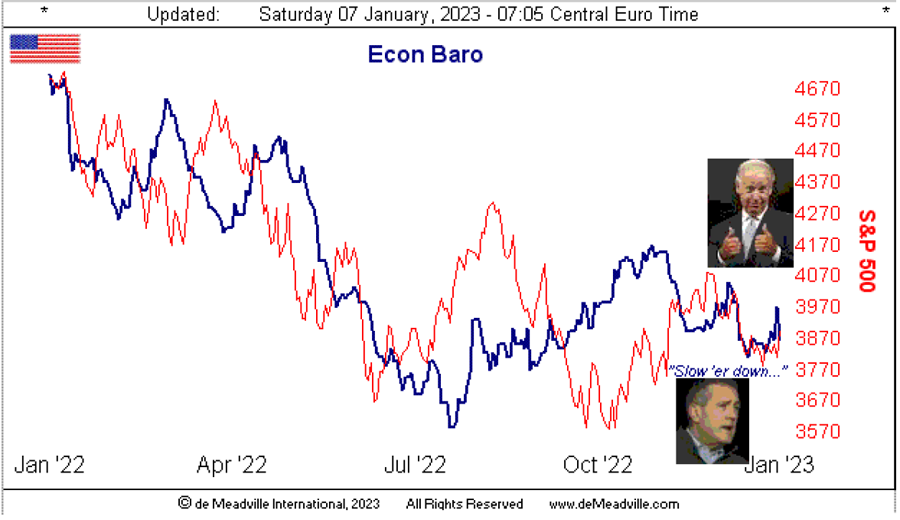 And 'twas quite a mixed bag from the 11 metrics which came into the Econ Baro to commence 2023. StateSide December Employment growth as measured by ADP improved ... but per the Bureau of Labor Statistics, Payroll growth slowed. The month's Unemployment Rate was reduced ... but so were Hourly Earnings and the length of the Average Workweek. And from the Institute for Supply Management, both its Manufacturing and Services readings shrank. As for November, the Trade Deficit lessened and Construction Spending improved ... but Factory Orders slowed to induce a negative change. All of which begs the question: shall the net decline in the Baro for Q4 data thus far result in a negative Gross Domestic Product reading come 26 January? The tension mounts...'Course it shan't "officially" be deemed a "recession" unless both Q4 and Q1 GDPs are negative (e.g. two successive negative quarters); recall Q3 was positive as predicted well in advance by the Baro.

Regardless, rightly mounting as well is the price of Gold on the left per price's daily bars across the past three months-to-date; on balance, that's a fairly healthy panel, albeit the baby blue dots of trend consistency have been struggling a bit to maintain pace. 'Course starting the year on the right foot has placed price near the top of the 10-day Market Profile as shown on the right: 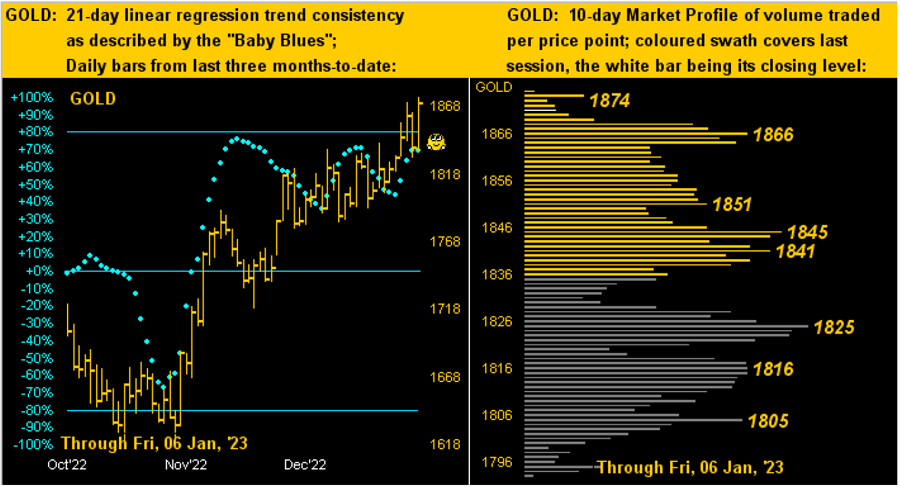 Silver has not celebrated the New Year nearly as well as has Gold. For we see (below left) in the like graphic, her "Baby Blues" have run out of puff, and (below right) price is more Profile-centered: 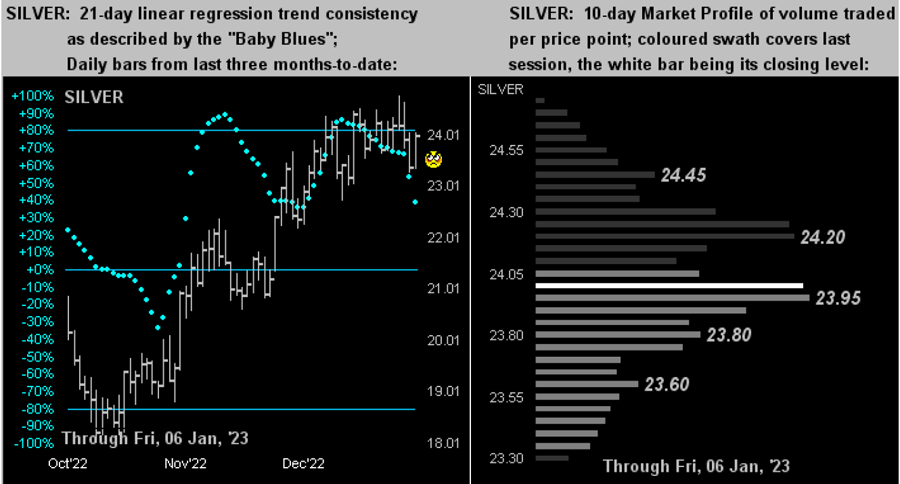 Thus as goes Gold's annual start, we have to think there's much more meat on the bone through 2023, (price suppressors notwithstanding). "

And as you've shown before, mmb, Gold can rise even when interest rates go up too..."

Let's go with a few whacky notes for the wrap:

■ On this side of the pond, 'twas written during the week that (per the FinTimes) "...Falling French inflation sparks hope of end to Europe’s price surge..." from which we drew a wry smile. For with the utmost respect to our neighbouring French friends, are they ever that economically-engaged such as to push inflation? (We read a year or so ago about an average French work week being less than 30 hours).

■ 'Tis reported StateSide that even as inflation impinges the consumer, "they" (is that how we're supposed to phrase it now?) deem payment of the mobile phone bill as of utmost importance. Missing the rent can be fine for months on end, but life ends without one's phone perma-glued to one's face. (Of note, if your kid has succeeded in making it into medical school, you might recommend they pursue specialization in kyphosis).

■ We're not sure of the Fed's logic (oxymoron) here. Per DJNW as regards the FOMC Meeting Minutes from 13/14 December: "...Policy makers worried they could have to raise rates more than projected if higher stock and bond prices spur economy..." Is it not the other way 'round? That the economy spurs or deters such prices? Further, it flies a bit in the face of what five decades ago we were taught whilst ensconced within U$C's ivy-covered brick walls that "the markets are not the economy".

■ Finally, ol' Bloomy reported this past week, per a strategist at a major household-name investment company, that "It's Going to Get Worse for Stocks Before It Gets Better" and -- get this -- poor earnings shall be the culprit! For how long herein have we been making reference to the "Look Ma! No Earnings!" crash? And "they" are just figuring this out now?Wow!

But you can rest ever so well with Gold! 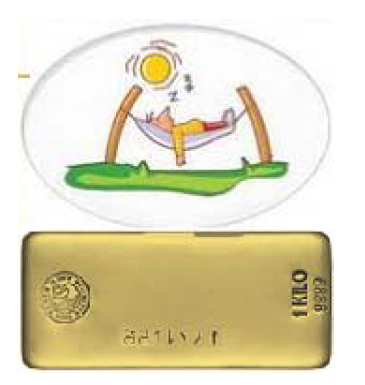