Who is not expecting a correction in precious metals right now?

It's always the smart, sensible, but kneejerk posture following a rebound that follows a bear market.

I even wrote about potential downside targets when the sector hit resistance roughly six weeks ago.

But the reality is that Gold and gold stocks do not correct that much until they have already made a big move.

Let me give you some historical examples following some major lows in Gold.

Gold rebounded roughly 50% in the seven months following its August 1976 low. During that period, Gold corrected only 5% and 8%. In fact, Gold did not correct more than 12% until two years after that bottom.

Here is a look at how the current rebound compares to past rebounds.

The current rebound is in line with the dotted line, an average of the four rebounds mentioned above. Note that the chart plots weekly data, making the corrections look smaller.

The prognosis for the gold stocks is similar.

Unless gold stocks accelerate higher in a vertical fashion, like after the 2008 bottom and after 2001, corrections will be limited to 15% and 20% at the most.

Below we plot the major rebounds in GDXJ on the same scale. The black, the current rebound, is slightly ahead of 2005 but well below the 2008 cyclical bull market.

An immediate pullback would be a retest of the breakout. From its measured upside target of $42, GDXJ would correct only 13% if it retested the previous resistance at $37. Even if the miners zoomed higher to the red lines, I do not think they would correct more than 15%. 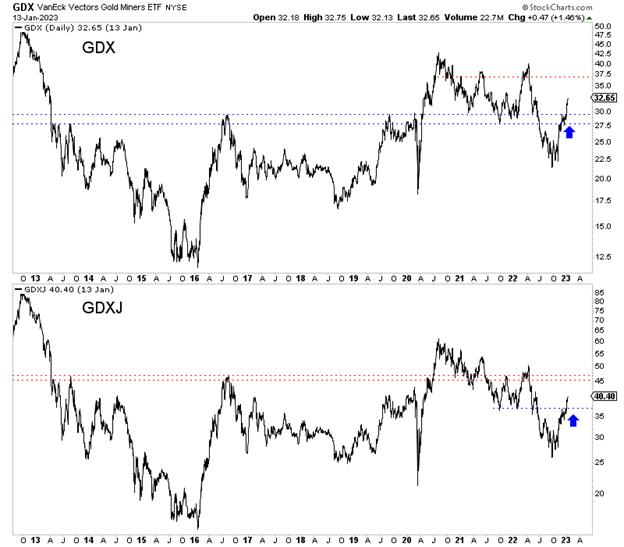 Presuming this is a real bull market for precious metals, it is too early to worry about a big correction.

Big corrections occur because of negative fundamental changes or because the market is overbought—no need to worry about either.

My guidance would be to evaluate the company's fundamental value to ensure the stock has plenty of upside potential, avoid buying stock charts that look like a rhino horn, and buy weakness but do not wait for a 20% or 30% decline.

I continue to focus on finding high-quality juniors with 500% upside potential over the next few years.