I have now been writing public articles for over 11 years on Seeking Alpha. And, through the years, I have covered many topics publicly, including the S&P 500, oil, the US Dollar, bonds, emerging markets, and many others. And, those that have tracked us over that time have recognized the accuracy of not only our short term calls but of our long term ones as well. Of course, we will never be correct all the time, but I think our long-term record speaks for itself.

Of late, our ElliottWaveTrader.net staff compiled just some of the major market calls we have made through the years, as there clearly were many, many more. But, these are the ones that our members have noted as being the most memorable:

- July of 2011: Called for rally in DXY from 73 with target of 103.53 while the Fed was pumping QE into the market and everyone was expecting a dollar crash. Market rallied initially to a target of 103.82 (within 29 cents of our long term target) before a multi-year pullback, as we expected.

- September 2015: Rolled out the EWT Mining Stock service, and started suggesting buys on stocks like Barrick Gold (at $7) and Newmont Mining (at $15).

- December 2015: Called for a major bottom in gold the night we struck the bottom, despite the market turning extremely bearish at the time and expecting a break down below $1,000.

- March 2020: Called for a major market bottom at 2200SPX, with an expectation of a rally to at least 4000SPX. Market bottomed within 8 points of our target.

But, as those that have tracked my work over the last 11 years likely know, my first major market call was made in gold. And, many still believe that may have been one of our best calls.

For those who may not remember the action we experienced in the metals market back in the summer of 2011, the market was going parabolic at the time, with some days seeing $50 increases. And the only arguments at the time were regarding how far beyond $2,000 gold was going to take us. This does not even take into account all those who have been calling for $5,000 gold for decades, with some claiming it would happen in an "overnight gap up."

"Again, since we are most probably in the final stages of this parabolic fifth wave "blow-off-top," I would seriously consider anything approaching the $1,915 level to be a potential target for a top at this time."

As we now know, gold topped out at $1,921, and began a 4-year decline until it bottomed at $1,050. But, at the time I was writing about a larger degree top being struck, these are a sample of the comments I received from Seeking Alpha readers:

"With all due respect Avi, you plainly do NOT understand the gold market."

"Your TA is useless. You don't understand the fundamentals because you only look to the past. Gold bulls are forward thinking. The times they are a changing..."

"The problem is that TA is like driving a car by only looking in the rear view mirror... There is no foresight involved; it's all based on past performance. The future of the fundamentals is what you fail to grasp."

"There is no way you can understand what is going on in gold by doing technical analysis. Gold is driven by fundamentals."

"Technical analyses is all well and good, but you cannot apply it to the PM sector which has been artificially manipulated and suppressed for years."

Now, for those that believe that the only reason metals struck a top in 2011 was due to "manipulation," well, I hope you do not hate me if I suggest you remove your blinders. A number of years ago, I was asked to pen my views on the "manipulation" perspective, and you can feel free to read it here:

Getting back to the 2011 metals market, I want to also note that I provided my downside targets for gold even before it topped. Yes, I know. Even though gold was still in a parabolic move higher at the time, I had the chutzpah to provide my downside target expectations.

"Based upon the Elliott Wave Principle, I would expect a very large pullback. In fact, the target for such a pullback will probably be a minimum low of $1,400, it could fall as low as $1000, or even as low as $700. It will depend upon how the decline takes form. But those are very viable targets for gold on the downside."

And, the comments regarding my views were basically the same as above, so, I will just note one of the more "reasonable" comments: 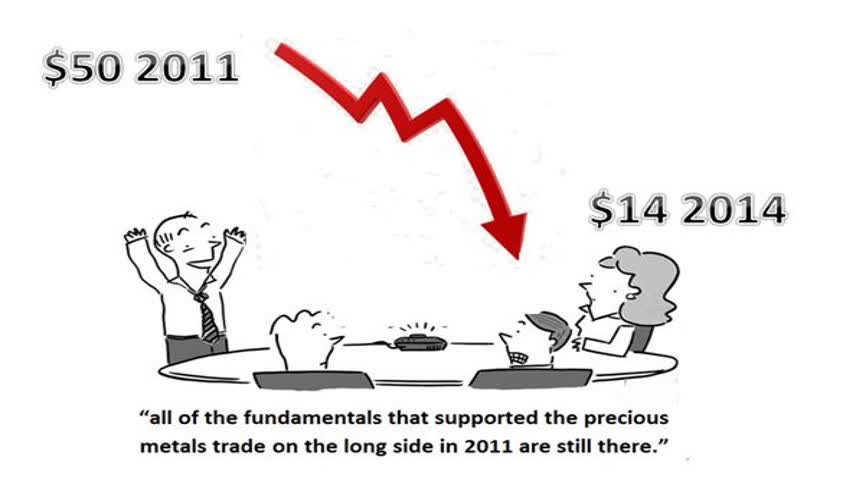 But what was truly amazing was that as gold was approaching its long-term low struck at the end of 2015, almost the entire market turned bearish and were again "certain" that it would continue in its downside trajectory (just as strongly as they were certain we would eclipse $2,000 in 2011), with most now turning from bullish to predicting a drop below $1,000.

Well, just like everyone was uber-bullish at the highs when we expected a major top, we turned bullish when everyone turned uber-bearish. On Dec. 30, 2015, I urged investors to be moving back into the metals complex as we were looking for a long-term bottom to be struck imminently due to the significant bearishness evident in the market:

"As we move into 2016, I believe there is a greater than 80% probability that we finally see a long term bottom formed in the metals and miners and the long term bull market resumes. Those that followed our advice in 2011, and moved out of this market for the correction we expected, are now moving back into this market as we approach the long term bottom. In 2011, before gold even topped, we set our ideal target for this correction in the $700-$1,000 region in gold. We are now reaching our ideal target region, and the pattern we have developed over the last four years is just about complete. . . For those interested in my advice, I would highly suggest you start moving back into this market with your long term money . . ."

In fact, back in September 2015, and when the metals mining companies were absolutely hated by the investor community, I rolled out a service on ElliottWaveTrader.net specifically to focus on the mining industry. We began urging our clients to buy mining stocks during the last quarter of 2015. In fact, I bought stocks such as Newmont Mining (NEM) in the $15-17 region at the time. And, NEM was my largest holding in the complex since that time.

Now, fast forward to 2022, and gold had been stuck in a correction since a local top was struck back in August of 2020. Yet, there were pockets within the market which still rallied into 2022. An example of such outperformance in 2022 included NEM, which went on to strike higher highs in April of 2022. Yet, when NEM struck the 84-85 region, I outlined to the members of ElliottWaveTrader.net that, for the first time since I bought NEM in 2015, I was selling almost my entire holdings in the company. You see, I set a target of 82-89 when NEM was hovering in the 28 region. And, when we moved into my target region, I stuck with my plan and sold my largest holding in the complex. Since that time, NEM dropped 57% off its highs. And, approximately 5 weeks ago, I noted to the members of that we completed a nice 5-wave rally off the recent lows in NEM, and I was buying back in.

As of now, the structure in gold seems to be quite bullish. And, while I would still like to see another pullback before we continue to trek much higher in 2023, I wanted to take a moment to outline my longer-term expectations for this impending rally that I expect.

Of course, I will be tracking the structure of the upcoming rally I expect to make sure there are no unforeseen surprises which may have us changing our expectations. Moreover, this upside target also considers larger than standard extensions, the type of which are commonly seen in the metals complex. But, if we enter "ludicrous speed" during one of these extensions, we can easily see momentum take us as high as $2,745. But, for now, I think the $2,428 target is the most reasonable and will be my initial focus. I would imagine we would have more information to make our target a much more high confidence one over the coming 12 months.