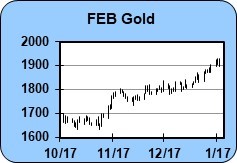 Despite a bearish wave of risk-off psychology and weakness in other precious metals, the gold market is attempting to hold modest gains early today. This suggests the bull camp remains confident and hopeful of a resumption of the downward track in the US dollar. The dollar is tracking lower early today and sits 70 points below yesterday's high, with the downtrend pattern on the charts leaving the prevailing direction down. The market should be supported by comments from the Fed's Harker yesterday indicating he was ready to downshift to 25 basis-point rate hikes. While the markets are not fully embracing the idea of a Fed pivot and that factor will remain paramount in the dollar index trade, the bull camp in gold should also acknowledge the potential for developing headwinds from weak US data like yesterday's retail sales number. In other words, gold and silver are likely to take some direction from classic physical commodity market demand views, and increasing concern for a global recession could dampen the beneficial impacts from a weaker dollar and declines in US Treasury yields. Investors remain skeptical of gold and silver ETF instruments, with gold holdings yesterday declining for an eighth straight session. Silver ETF instruments saw a large, 3.1-million-ounce outflow yesterday, which leaves a year-to-date decline of nearly 1%. Yesterday's US gold and silver trade action appeared to be a classic “buy the rumor, sell the fact.” However, US scheduled data from yesterday increased the likelihood of a Fed pivot, which for the time being has mostly overcomes rising fear of recession in the US. Certainly, the Dollar Index reached a very significant short-term oversold condition, and the recovery off the low yesterday was not surprising. On the other hand, the prospect of further sharp declines in the dollar is good, and a slide below 101.68 could rekindle fresh gold and silver buying. At one point yesterday the Dollar Index fell to its lowest level since May, with confidence among the bear camp boosted significantly by the combination of falling inflation and slowing retail sales in the US. While gold and silver prices did not seem to benefit from the sharp decline in US Treasury yields, a continued decline ahead should firm support and entice bargain hunting buying on dips.

Given its sustained leadership, we will shift our daily focus to platinum and away from palladium. However, platinum is showing anything but positive leadership this morning, with prices spiking down and reaching their lowest level since December 29. Unfortunately for the bull camp, last the net recent spec and fund long in platinum (as of January 10) was 34,000 contracts, which was the highest reading since early March of 2022. This leaves a significant number of long positions vulnerable to stop loss selling, especially given a series of failures at key chart support points. On the positive side of the ledger, ETF holdings saw a very significant inflow of 13,342 ounces yesterday, which amounts to a single day increase of nearly 0.5%. Perhaps the sharp slide off the January highs and the potential for a Fed pivot has inspired investor interest. While we are skeptical of the potential for the US to mint a $1 trillion platinum coin (as a method to increase currency and temporarily solve the debt ceiling crisis), intense fighting in Congress over the debt ceiling might keep talk of such an action coin in place. A $1 trillion platinum coin would require 1 million ounces, which is clearly a material amount given the world supply and demand balance has not posted a 1-million-ounce surplus since 2011. Apparently, legislation implemented 22 years ago allows the US Treasury to mint platinum coins of any size without Congressional approval. While we expect further corrective declines in platinum, the $96, six-day slide has put April Platinum contract close to uptrend channel support. That line comes in today is $1,025.90. The market did draft some lift from a temporary euphoria support following yesterday's inflation report. Palladium reversed aggressively yesterday and violated psychological support at $1,700. With open interest in nearing its highest level in a month and many commodity markets shifting into correction mode, a further slide to $1,674 is likely.

MARKET IDEAS: Even though we see value in February Gold at the psychological $1,900 level, we also see the market temporarily violating that level and returning to midmonth pricing if around $1,875. With a significant range down failure yesterday in March Silver and a large daily outflow from ETF instruments, we see near term downside targeting at $23.30 and then at $23.22. Even though we expect gold, platinum, and silver to return to bull market status, it might be premature to expect solid lows today. The combination of contracting inflation and a significant collapse in US retail sales should move the needle toward a Fed pivot, and that should eventually help the precious metals find solid support.

With a risk off mentality extending into another trading session and copper prices forging very significant gains from this month's lows, a noted correction is fully justified. Yesterday's blowoff rally and reversal on significant trading volume and rising open interest has the hallmark of a top. With a massive, two-day rally of 24 cents and a 13-cent rally in a matter of hours, the market was clearly overdone technically. Furthermore, with prices early today sitting nearly $0.20 below yesterday's highs, the bull camp should be feeling pressure to liquidate. On the other hand, the bull case remains solid from the supply side, with several key producing areas in the Southern Hemisphere facing outages from environmental protests and government intervention. Yesterday, a committee of Chilean ministers rejected a request for copper mining permits as they attempted to reduce the negative environmental impacts from large-scale mining. Production in Peru is also threatened because of protests around a mining operation. It also appears that a pattern of daily declines in LME copper warehouse stocks has reemerged.

MARKET IDEAS: While the copper market has shown significant resiliency and has consistently managed to mold Chinese news into a positive, the market was significantly overbought and in need of a cleansing break. Bloomberg reported overnight indicated that Chinese copper investors were turning cautious on copper, and with the Lunar New Year holiday approaching, they might be less likely to be in position to bargain-hunt on a correction. With yesterday's risk-off environment spilling over into today's trade, March Copper could slide to critical support at $4.11. For long-term buyers, we suggest waiting for a full first retracement (of the January rally) down to $4.1050 to get long or add to existing longs.