After having lost about 65% last year (2022), Bitcoin began to get some traction on January 9th 2023, which was then boosted on January 12th following the “in-line” US December CPI announcement which measures the US inflation rate over 12 months. That had been welcome by the Bulls which read into this a stabilizing inflation and interpreted it as a sign that the US Federal Reserve (FED) will stop soon its rates hikes, which triggered a serious short-squeeze of 18% over 3 days, taking Bitcoin back to pre-FTX collapse, i.e. just a tad below $21,000.

But after that move, Bitcoin stalled around $21k for now (see yellow dotted-line on the graph below). If we look at the move from the beginning of the year, it’s impressive in terms of intensity: 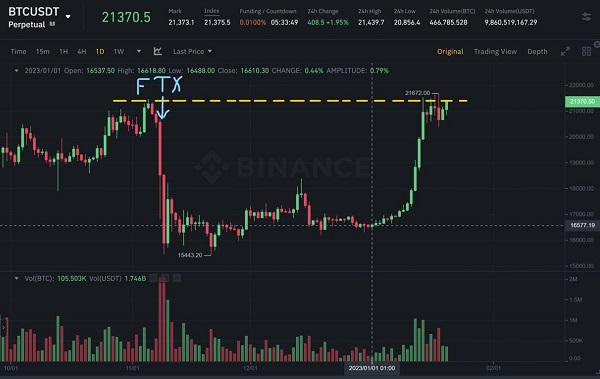 but if we step back to a weekly view of the price action, Bitcoin is still a long way from where it was in early 2022 (around $47k - thin dotted line on the graph below). 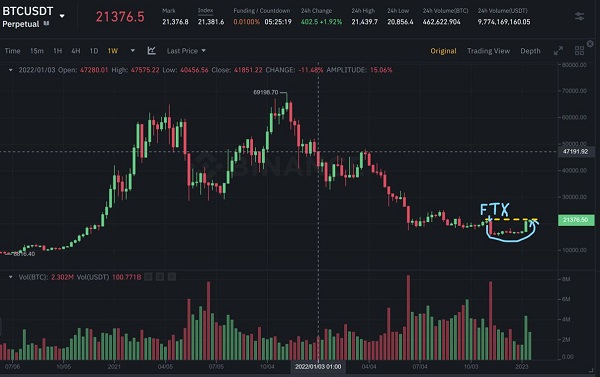 Thus so far, Bitcoin has been moving higher on short-squeezes, breakouts, low liquidity and hopes, in a highly technical fashion. The next upside target is around $25k (blue-dotted line) but the main one lies around $30k (green line on the graph below). 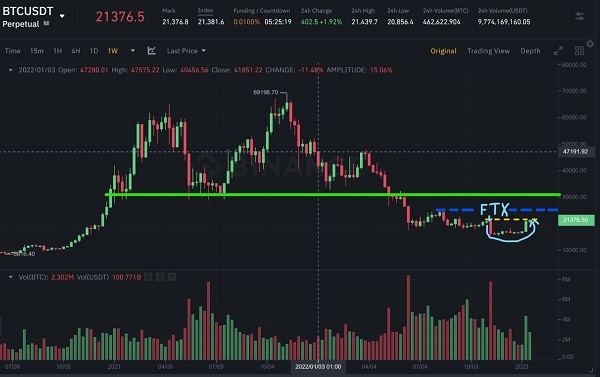 Bitcoin is a risk asset, which would benefit from a weakening dollar, i.e. as soon as the FED will hint at reducing its rate hike pace.

Economies worldwide are weakening, especially in the US, and hiking rates at the same time may lead to recessions, which would then force central banks to cut rates and potentially start again Quantitative Easing. That should ignite a strong risk-assets rally in the second half of the year, and we may then see Bitcoin heading back to $50k.

On the one hand, based on the last comments from Jerome Powell (US FED Chairman), he looks determined to keep on hiking rates (“higher and for longer”) despite warning signs from the real economy, in order to avoid the 70’s-80’s FED mistake when it cut rates too early after the mid-70’s hike to fight inflation, that came back with a vengeance in the early 80’s.

On the other hand, the Market wants to front-run the FED as usual, on top of major underinvestment by institutions following their deleveraging of 2022.

This tug of war between the Market and the FED may resolve in the Spring to early Summer of 2023: one is going to break, and it’s likely that it would be the Market losing hope in front of a stubborn FED, at which point the FED may have to come to the rescue by reverting course.

So going back to Bitcoin this year, it will probably continue its early ascent toward $25k… perhaps even $30k, but it may not keep going straight up from $30k to $50k without a serious pullback later in the year when the Market ends-up broken by the FED, before coming to its rescue, which may then push Bitcoin above $30k and toward $50k…

However, we are still early in the year, and there are a lot of “unknowns” lurking in the shadows… but overall, 2023 could end as a mid-double-digit return for Bitcoin.