Make Kitco Your Homepage
Favorites:
EDIT
You are in Home > News > > Investment Trends

Zinc is a crucial component for all infrastructure projects, but is it taken for granted 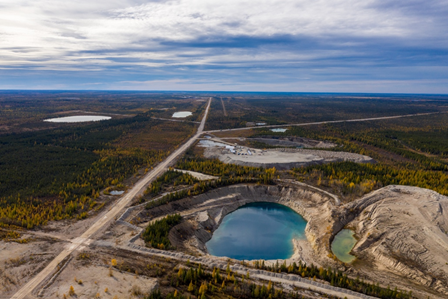 Photo Caption: The Pine Point Project, featuring the exploration camp, a historic pit, and waste pile as well as some of the existing haul roads.

Zinc is all around us, and yet we’re soon going to run short. It’s the world’s fourth most consumed metal after iron, aluminum and copper.

Over 65 per cent of zinc is used to coat steel, a process known as galvanization, making it highly resistant to corrosion. Steel-reinforced concrete and vehicle panels last much longer today thanks to galvanization.

In Canada alone, the value of the top 100 infrastructure projects surpasses $200 billion. To stimulate economies, nations across the globe are building out, upgrading or replacing their ageing infrastructure.

One prime example of this is China’s massive Belt and Road Initiative that involves infrastructure development and investments in 152 countries and international organizations in Asia, Europe, Africa, the Middle East and the Americas. Add in all the other projects around the world, and you can see how quickly the demand for zinc will skyrocket.

Annual global infrastructure spending is over $3 trillion, and this will increase substantially over the next two decades. Zinc will be an essential part of that. But supply will not meet demand under current development scenarios, meaning prices have much higher to go.

“Over the next four years, at least six zinc mines are at risk of closing in North America due to reserve exhaustion. This could mean a 35per cent drop in production and a big supply gap.” — Robert Wares, Executive Chairman of the Board, Osisko Metals Inc.

Pine Point: An exceptionally large near-surface zinc mine in the making

Refined inventories of zinc metal continue to be at their lowest levels in 12 years.

Known warehouse inventories are at 4.2 days of global consumption with 10 days considered to be at critical levels. Any significant increase in demand will be impossible to accommodate.

Considering that there are very few quality zinc projects in the development pipeline, and even fewer that will produce one of the cleanest concentrate globally, the future is bright for Osisko Metals (TSX-V: OM; OTCQX: OMZNF; FRANKFURT: 0B51).

Of the projects likely to be developed, most contain penalty levels of deleterious elements like silica, manganese, mercury, arsenic and so on. To compensate for the impurities that the smelters carry, these concentrates apply penalties (discounts) to the price and charge elevated treatment charges, eating into producer profits. 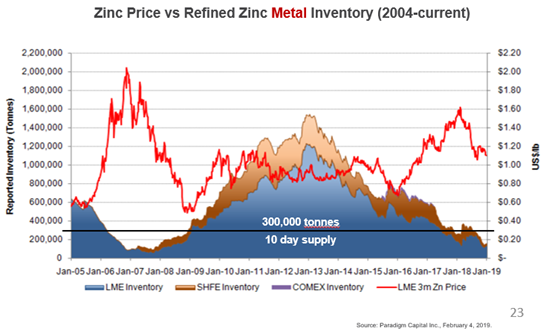 Photo Caption: Current warehouse inventories are at 4.2 days of global consumption with 10 days considered to be at critical levels.

But not all zinc deposits are created equal.

Osisko Metals owns the flagship Pine Point lead-zinc project with a storied history dating back to 1898, initially discovered during the Klondike gold rush.

The growing resource of Pine Point puts it squarely into world-class territory. Located in the Northwest Territories on the south shore of Great Slave Lake, Pine Point was last operated by Cominco for 25 years until 1987, mining some 64 million tonnes of 7 per cent zinc and 3.1 per cent lead. At the time it was said to be Canada’s most profitable zinc mine.

Osisko Metals is one of the only base metal junior exploration and development companies with the technical know-how and financial ability to raise substantial capital to advance their projects to meet the potential surge in zinc demand. Osisko Metals is one of several Osisko Group companies that are developing mining and exploration projects throughout Canada after discovering, building and selling, in 2014, Canada’s biggest gold mine: the Canadian Malartic mine in the heart of the Abitibi region of Quebec.

An internal analysis by Osisko Metals indicates that Pine Point is the only large tonnage, open-pit constrained project among base metal development peers. Since acquiring the project in February 2018 for roughly $35 million in an all-share transaction, a 70,000 m drill program converted the historical resource into an NI 43-101 compliant inferred resource within 10 months. 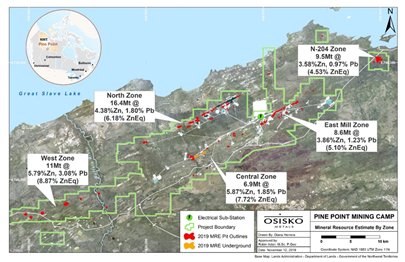 On the heels of more drilling this year, Osisko Metals recently released an updated resource estimate. Pine Point’s total mineral resource base increased by an impressive 36 per cent, with a new (pit-constrained and underground) Inferred Mineral Resource Estimate of 52.4 million tonnes grading 4.64 per cent zinc and 1.83 per cent lead, or 6.47 per cent zinc equivalent.

And thanks to an aggressive exploration drilling program, Osisko Metals is hunting for discoveries at Pine Point to increase the resource base and create additional value. To put this into context, consider that approximately 90 per cent of worldwide zinc mining operations are underground, and yet, of the top 10 zinc mines globally, six are open-pit operations. Most of Pine Point is near-surface and would be mined by open-pit.

“Having achieved our objective of increasing the resource base to the 50 m/t threshold, we now believe that the project could develop into a mine large enough to enter the top 10 zinc mines globally on an annual zinc-in-concentrate production basis. We would also emphasize that exploration at Pine Point has been minimal in the last 30 years and we believe there is much more to come for this project.” — Jeff Hussey, President and CEO, Osisko Metals Inc.

There’s already excellent support infrastructure in place. Pine Point is within 60 km of Hay River and is known as the “Hub of the North.” Additionally, there is low-cost hydroelectric power available on-site, there’s rail to Hay River from the south, and there are paved roads leading to site in addition to about 100 km of haul roads from the Cominco Limited mining era. Concentrates can be shipped to ports in Vancouver or Prince Rupert, B.C. for Asian markets, or across Canada for European markets.

A total of $8 million will be spent through to the end of 2020 in exploration using innovative techniques including the 2019 airborne gravity gradiometry survey, LiDAR (Light Detection and Ranging) topographic data, that is now compiled with the pre-1988 historical dataset that is now in digital format. A Preliminary Economic Assessment of the project is planned for completion in Q2 2020.

To date, over 60 new airborne targets have been identified, and drilling will focus on these as a priority. Deeper drilling will also test the potential for more high-grade mineralization at depth.   With multiple exploration targets and opportunities across the camp, the focus is on finding more quality higher-grade deposits.

Osisko Metals’ Executive Chairman of the Board, Robert Wares, is a well-recognized and respected figure in the Canadian and international mining industry. He is a professional geologist with over 35 years in mineral exploration and development. Wares is well known for discovering the Canadian Malartic bulk tonnage gold mine, developed by Osisko Mining into Canada’s largest gold mine. In 2007, he was a co-winner of the Prospectors and Developers Association of Canada’s “Prospector of the Year Award.”

He was also on the board of Arizona Mining, which discovered one of the largest lead-zinc-silver deposits in North America, subsequently sold to South32 for $2 billion last year.

A perfect storm brewing in the zinc market

Wares states that there’s a big disconnect between inventories and prices. “Despite inventories near record lows and stable prices, refined zinc metal production has been going down.”

Zinc inventories remain near their lowest levels in 12 years equivalent to just under five days of inventories. With current zinc metal inventories at very critical levels, it’s a situation that is simply unsustainable.

Right now, base metal markets, including zinc, are temporarily facing a challenging environment due to ongoing U.S./China trade tensions. But once that’s resolved, demand for zinc will return to normal and production/inventory shortfalls will hit the market.

By all accounts, the market is heading into a perfect storm of supply shortfalls combined with surging demand. Investors in Osisko Metals will reap the benefits, as the growing resources at Pine Point have put it squarely into world-class territory.

By Market One Media Group