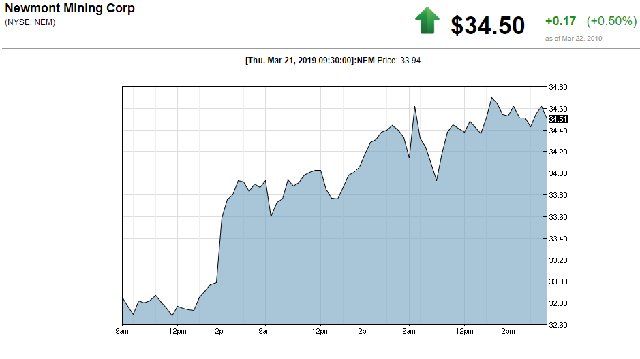 (Kitco News) - Newmont Mining Corp. (NYSE: NEM) said Monday that its board of directors has declared a one-time special dividend of 88 cents per share that is conditional upon approval of the company’s planned takeover of Goldcorp Inc. (NYSE: GG, TSX: G).

The two companies announced a plan to merge back in January, creating the world’s largest gold-mining company. Newmont subsequently fought off a hostile bid takeover from Barrick Gold Corp. (NYSE: GOLD; TSX: ABX), instead agreeing to a joint venture with Barrick for the two companies’ Nevada operations.

Now the Newmont-Goldcorp merger faces one more challenge – a number of prominent shareholders have criticized the deal, including well-known hedge fund manager John Paulson and Van Eck. In particular, critics cite payouts to Goldcorp executives, but they also maintain Goldcorp shareholders would be unfairly benefitting from the Newmont-Barrick joint venture.

“We are pleased to make this special dividend payable to Newmont’s current shareholders in recognition of the potential synergy value of the Nevada joint venture agreement,” said Gary Goldberg, Newmont’s chief executive officer. “We have continued to engage with, and have listened carefully to, our shareholders, and we are pleased that several of our largest shareholders have expressed their support for the combination with Goldcorp.”

The Goldcorp shareholders vote on the merger is scheduled for April 4, while Newmont shareholders are to vote on April 11.

Meanwhile, Goldcorp issued an announcement Monday saying that it consented to the one-time special dividend to Newmont shareholders. Goldcorp also announced that Institutional Shareholder Services Inc., an independent proxy advisory firm, has recommended that Goldcorp shareholders vote in favor of the merger with Newmont.

Newmont maintains that the merger with Goldcorp would mean value creation for shareholders. Officials say the deal would provide a combined $365 million in expected annual pre-tax synergies, supply chain efficiencies and full potential improvements, with the new company targeting annual production of 6 million to 7 million ounces over a decades-long time horizon. The merged company would also have the largest gold reserves and resources in the gold sector, with operations located in areas considered favorable mining jurisdictions, and deliver the highest dividend among senior gold producers.