(Kitco News) - Gold is perhaps the latest precious metals to make a broad appearance as a catalyst, now being used by some researchers to turn sunlight into energy.

Scientists at the Institute of Chemical Sciences and Engineering at the École Polytechnique Fédérale de Lausanne, Switzerland, have developed methods to turn sunlight into liquid fuels using gold and other precious metals as catalysts. Marcel Schreier, PhD student and recipient of the IPMI 2015 Student Award, explained the technology to Tech Metals Insider. 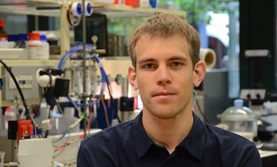 Schreier is part of the Laboratory for Photonics and Interfaces lead by Professor Michael Grätzel, a world renowned authority on photovoltaics and photoelectrochemistry.

His department does research on the complete system of solar energy: photovoltaic devices and the storage of solar power. “The sun is the main source of renewable power for the whole planet. The problem is that its transformation into electricity leads to high fluctuations in our power grids”, explained Schreier. “Turning sunlight into fuel is the key technology for enabling the further use of solar power.”

“The classic way of making a solar fuel is to produce hydrogen which can be made easily by electrolysis of water,” Schreier said. “What we have done is find a way to turn light directly into hydrogen by a photo-electrochemical approach.”

“The other way is to convert carbon dioxide (CO2) directly. This has a very interesting advantage in the sense that if you convert CO2 together with water you essentially have the potential of making a liquid fuel. The result is a fuel that can be fed directly into the existing energy infrastructure – we already know how to store and transport liquid fuels which makes this a very promising idea.”

That said, producing a fuel such as methanol is a very difficult process. Schreier: “You have to exchange numerous protons and electrons. To do this in one step, you need a catalyst which at the same potential, pH, temperature etc. can do all of these steps.”

An alternative way consists in producing caron monoxide (CO), which can be readily converted into liquid fuels by established processes.

“A gold catalyst, combined with high voltage photovoltaics produced by our group and combined with iridium oxide as an anode can be used to produce carbon monoxide very efficiently. The nice thing about CO is that it can be converted into all sorts of other fuels,” Schreier said.

“We have the technology to use CO together with hydrogen as a so-called syngas mixture. From there, it can be converted into fuel for cars using the Fischer Tropsch process. In the first part of this process precious metals play an important role. To make higher hydrocarbons such as ethanol or methanol, the choice of catalyst will depend on the direction taken. Copper can act as a catalyst for these reactions.”

Gold and, in some trials, silver are the catalysts used most frequently to produce CO. Several other institutions do research trying to work without precious metals.

However, according to the EPFL’s results, gold is “the champion.” One very important aspect of gold is the metals’ low “overpotential.” In simple terms, this is the amount of excess energy required to run the reaction. The EPFL observed only 300mV is needed for this type of process.

The higher a catalysts over-potential, the more energy is lost in the conversion process resulting in higher cost for more solar panels to generate excess energy that will not end up in the product. The same is true, according to Schreier, for platinum when reducing water to hydrogen in electrolyzers.

At this point, the researchers are utilizing gold foil – reducing the gold loading of the catalyst is now an engineering challenge. “Perhaps the answer is gold nano-particles,” concluded Schreier, an option that has some remaining challenges but which is already being pursued.