(Kitco News) - Gold traders get ready for potential fireworks this week. Now is the time to pick your levels and write out your trading plan.  There are a bevy of headline events that could rock markets in one direction or another including:

What's happening now? The U.S. dollar index has rallied to its highest level in eight months, as the greenback pushes toward a test of its March price peak. The 100.39 level in the dollar index stands as tough nearby resistance and could prove to be a temporary stalling point.

Bargain hunters will begin sniffing around in the gold market. Action in the dollar index will be key to watch for gold traders. There is potential that the dollar has priced in too much good news. The dollar index is up roughly 11 percent on the year and the U.S. Federal Reserve hasn't even hiked rates yet.  In the short-term, if the March price peak in the U.S. dollar index holds firm, it could allow room for gold to bounce.

Is there the potential for a "buy the rumor, sell the fact" type of response in the dollar later in December? Traders should ready themselves for this possibility. In turn, that type of knee-jerk reaction could support gold in the weeks ahead.

Resistance on the upside: The Nov. 18 daily low at $1,062.40 is initial resistance for the gold market. A recovery about that zone would be an encouraging signal in the short-term. Beyond there, additional technical chart points are seen at $1,087.30 and then $1,098.00.

Support on the downside: Friday's low at $1,051.60 is initial support and for now that is holding firm. Below there, minor support from the monthly continuation chart is seen at $1,045.20, the February 2010 monthly low. On an intermediate term basis, additional support lie sat $1,014.60, the March 2008 monthly high. 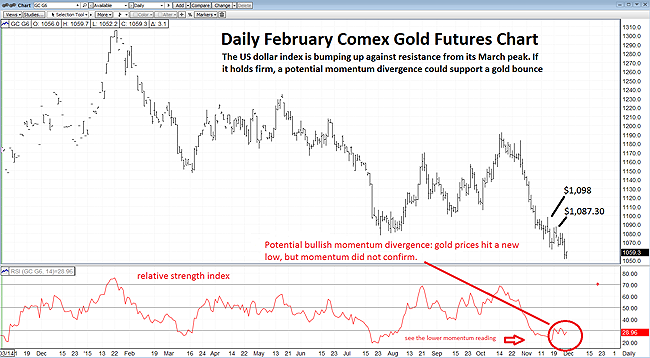 The backdrop: If the dollar index resistance zone holds firm, the potential bullish momentum divergence could support a recovery move higher in gold.

Write out your weekly trading plan: The best trades are those thought through, written down and implemented as markets hit your levels. Plan your trades and trade your plan.