(Kitco News) - Société Générale looks for gold prices to average $1,000 an ounce in 2016, but to fall below this level during the course of the year.

“We forecast an average gold price of $1,100/oz in Q4 15, with this weakness extending into the following quarters, leading to an average of $955/oz in Q4 16,” the bank said in a quarterly commodities report released Wednesday. “We believe the macroeconomic backdrop will be the key driver of prices, and tightening in U.S. monetary policy, and consequent U.S. dollar strength, will cause a steady decline in gold prices in the coming years.”

Analysts described themselves as bearish on silver, calling for a full-year average forecast of around $14 an ounce. 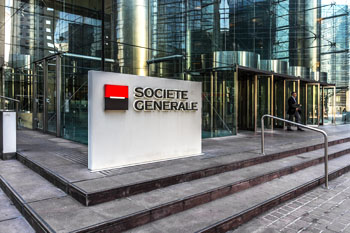 As for gold, analysts expect the metal “to continue to drift lower as it comes under continued pressure in a rising interest rate environment.” Analysts pointed out that the metal ran higher after the September meeting of the Federal Open Market Committee cooled expectations for a rate hike, but has since been pressured when a statement after the October meeting was construed more hawkishly.

“What caught the market by surprise in the policy statement was the lack of a mention of the global economy, a major concern before,” Société Générale said. “The market took this as a sign that the Fed is less concerned about the potential impact of a U.S. rate hike for the global economy, and thus the prospect of a rate hike in December increased.”

Pressure then hit gold and silver as the dollar index strengthened, the bank said. Still, Société Générale cited some supportive influences, including improved demand for gold and silver bullion coins, particularly in the U.S. and Japan.

Société Générale looks for silver production in 2015 to decline by a couple of percentage points from the record high of 2014, then decline some more next year.

The French bank said it looks for platinum to remain weak in 2016 as well, although it listed an average price forecast of roughly $960, up from current levels. Factors likely to hold the metal back include a large above-ground inventory and subdued outlook for industrial demand.
Analysts look for palladium prices to average around $680 in 2016, with further improvement in following years.