(Kitco News) - Gold and silver prices fell to multi-year lows in December. Not coincidentally, so did Nymex crude oil futures. Crude oil has led a "bust" in the raw commodity sector that has been 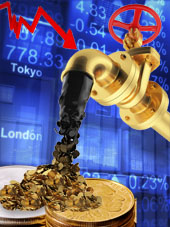 playing out for the past three or four years--depending on the specific market. Most of the raw commodity sector, including the precious metals, will continue to follow the lead of crude oil. When crude oil bottoms out, it's very likely many other commodity markets will do the same.

One bit of good news for the raw commodity bulls is the major bear market in crude oil is mature and the vast majority of its price pressure has already occurred. To put it another way: It's likely there is not much downside price potential left in crude. Nymex crude oil prices bottomed out in 2009 at around $33.00 a barrel.

See on the monthly continuation chart for nearby gold futures that prices have dropped below the key 50% Fibonacci retracement of the move from the
2001 low to the 2011 high. That adds to the overall very bearish chart posture for gold. I would not be surprised to see gold challenge $1,000.00 an ounce in the coming few weeks or few months, before putting in a major bottom shortly thereafter.

However, the past 4.5 years have seen this precious/industrial metal trend sharply lower and lose over two-thirds of its value. In 2015 silver prices dropped below $14.00, and it appears there is still more downside price potential in the coming months. The longer-term monthly continuation chart for nearby silver futures shows strong chart support does not show up until around the $10.00 area. For the bulls to gain some significant longer-term technical strength they would have to push prices back up to the $18.00 level, which would break the longer-term price downtrend in the silver market.