(Kitco News) - With gold looking to end the year with its third consecutive loss, the question being asked in the marketplace is if 2016 will be a game changer for gold. However, according to many, analysts, investors will have to wait until the second half of the year to find the answer.

According to many analysts, the two biggest factors that will dominate the gold market is the dollar and inflation pressures; it could take time to determine where each of them is heading, leaving the yellow metal vulnerable to lower prices. A variety of year-end reports from leading financial institutions are calling for gold fall below $1,000 an ounce in the first half of the year.

However, there is some optimism that once the market has fully priced what is expected to be a slow rise in U.S. interest rates, compared to historical norms, gold prices could start to rise in the second half of the year.

In 2015, for the second year running, the U.S. dollar dominated the marketplace, hitting its highest level since April 2003 earlier this month as investors anticipated the Federal Reserve to hike interest rates for the first time in almost a decade. While the U.S. dollar was rallying, the gold market was suffering, falling to new 5.5 year lows in early December.

Analysts have noted that diverging monetary policies -- as the Fed is expected to hike interest rates while other major central banks, including the Bank of Japan, the European Central Bank and the People’s Bank of China, loose their monetary policy -- is controlling the global marketplace. 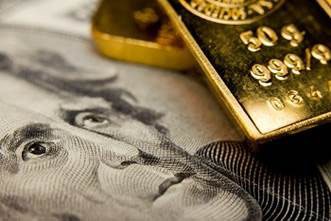 “What’s clear now is that over the near term the U.S. and its trading partners are going down different paths,” said Ira Epstein, director of the Ira Epstein division of Linn & Associate, said in his 2016 outlook. “This should provide the US Dollar with a bid and other currencies with an offer. A stronger Dollar without inflation is not friendly to gold prices.”

Epstein added that he could see gold continuing its downtrend in 2016 and eventually falling below $1,000 an ounce.

Currency analysts at BNP Paribas said in a recent report that their short EUR/USD position was their best trade this year; the bank added that it expects that trend to continue, forecasting that the single currency will eventually fall to parity against the greenback.

However, some analysts are now expecting that with the Fed’s first rate hike now in the past, the U.S. dollar will start topping out. That is even the view of the Federal Reserve; Fed Chair Janet Yellen recently said that she expects the central bank’s gradual rate-hike cycle should stabilize the U.S. dollar. According to the latest central bank forecasts, the Federal Open Market Committee (FOCM) is expecting interest rates to be around 1.4% by the end of 2016.

“The Federal Reserve is only looking for interest rates to end 2016 at around 1.4%. That is nothing remotely resembling aggressive action compared to other cycles,” said George Milling-Stanley, Head of Gold Investment Strategy at State Street Global Advisors.

“I think the downside in gold is pretty well supported and we could start seeing prices move higher in 2016,” he added.

Milling-Stanley said that he is expecting the U.S. dollar should eventually top out as the impact of this gradual cycle becomes fully priced.

But the question remains:  how much further the U.S. dollar has to go? In a recent report, Deutsche Bank said that they could see the U.S. dollar gaining another 6% in the first half of 2016, before eventually topping out.

Ole Hansen, head of commodity strategy at Saxo Bank, agreed that U.S. dollar gains could be limited; he expects the U.S. dollar has momentum to appreciate another 5%.

Of course higher interest rates and U.S. dollar strength is only part of the picture. Julian Jessop, head of commodity strategy at Capital Economics said, in a recent interview with Kitco News that if the Fed raises interest rates because of rising inflation pressures this would be a positive development for gold.

Commodity analysts at Macquarie also agree that it will be important for gold investors to look at why interest rates will be moving higher.

There’s no denying these are tough times for gold and the Fed is not going away as a key price driver – the market is focusing on the speed and severity of future hikes but we think as important is the rationale. If it’s because inflation picks up, as we expect, gold should do better than consensus,” they said.

The biggest factor determining where inflation rates are headed in 2016 will be to look at oil prices. This past year has seen another poor performance for crude oil prices, especially in the second half of the year and December, in particular. Crude oil prices have hit new multi-year lows almost on a continuous basis this month and are down more than 30% on the year.

However, many analysts note that oil prices only have to stabilize for inflation to pick up as prices in 2016 will be compared to 2015; economists describe this factor as the base effect.

Finally, some gold analysts remain optimistic that market supply and demand fundamentals will provide some support for gold in 2016.

David Hightower, founder of the Hightower Report, said that physical demand for the precious metal will remain strong in 2016 but the market is faced with dwindling supply as mines cut back production.

“2016 will be the year gold become a physical commodity again and run on its own market fundamentals,” he said. “I see the $1,030 to $1,050 area as the value zone for gold. I have slowly been accumulating.”

Bernard Dahdah, precious-metals strategist at Natixis agreed that low mine supply will be an important factor for the gold market, pointing out that mines have significantly cut back their exploration budgets for the last three years. However, Dahdah added that remains negative on gold in 2016 and doesn’t see a potential supply crunch impacting prices until 2017.