(Kitco News) - Investors with a longer-time horizon who can stomach a “bumpy” ride might be able to benefit from price appreciation in platinum group metals during 2016, analysts say.

There was optimism about PGMs a year ago, but instead these metals tumbled during 2015, dragged down with commodities in general on worries about China’s economy and a strengthening U.S. dollar, with exchange-traded-fund outflows adding to the pressure. Nevertheless, platinum and palladium are expected to remain in supply deficits, analysts said.

“We think it will be a bumpy scenario going forward,” said Robin Bhar, metals analyst with Societe General. “We are not at all convinced that a bottom is in place.” 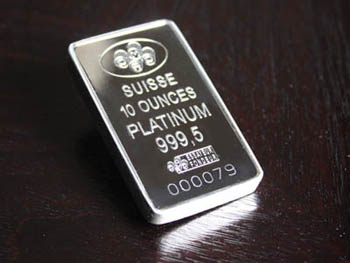 One factor that could weigh on PGMs for a while yet is spillover weakness from the softer tone in gold expected by many investment banks, Bhar said. PGMs also tend to move with industrial metals, which had a weaker tone in 2015, hurt in part by worries about China’s economy, he said.

“Our concern continues to be not only China but much of the emerging markets,” said Bart Melek, head of commodity strategy with TD Securities. “Certainly, we don’t think Europe is going to take off in terms of growth very quickly.”

Still, analysts do look for improvement in demand, particularly in the auto sector, which uses PGMs for catalytic converters. However, Bhar continued, adequate supplies could remain an issue for the market, with recycling of PGMs strong. Also, South African mine output has normalized after strikes in past years.

Yet another weight for PGMs has been liquidations from exchange-traded funds, particularly in South Africa. ETFs trade like a stock but track the price of the commodity, with metal put into storage to back shares. When investors exit, that metal makes its way back onto the open market, adding to supply.

“Although we don’t have too many concerns about demand over the longer run, there is no doubt that in … the next 12 months, supply is abundant, adding to already quite high above-ground stocks of both platinum and palladium, ” Bhar said.

Melek commented that there is potential for power shortages to curtail mining in the key producing nation of South Africa. In the case of platinum, Deutsche Bank suggested “the only likely price stabilizers” may be strikes by workers or producer cutbacks, but also described this as “very likely in 2016.” The bank characterized South African producers as cash-flow negative at current spot prices, although existing liquidity – such as capital-raising efforts – could sustain companies until the end of 2017.

“Chances are there is going to be quite a substantial primary deficit,” Melek said. “Over the last year or so, that deficit has been filled by inventories, in part through ETF liquidations….So the fact that we had a deficit did very little to support prices.”

Bhar pointed out that the supply deficits in PGMs may not drive the metals as directly as say other industrial metals like copper or aluminum, since PGM direction is also determined heavily by investor flows.

“When PGMs were at their peak, it was noticeable that investor buying was stronger,” Bhar said.

Still, Melek said, the continual annual supply deficits will eventually underpin the market.
“We think supplies will be tight. Above-ground inventories will erode, and we still see these structural deficits in the PGMs, particularly palladium,” Melek said.

In fact, on a longer-term horizon, palladium remains one of TDS’ and Deutsche Bank’s favorite metals.

“We see an eventual (price) recovery, but it will be slow,” Bhar said.