Fund Your Gold Positions With Euros & Yens, Not Dollars In 2016 - Analysts

(Kitco News) - Gold continues to struggle, especially in U.S. dollar terms, with many analysts expecting the price to fall below $1,000 an ounce next year. However, some analysts point out that if investors focus on gold in other currency terms, they’d be a little more optimistic.

According to a famed investor and author of the Gartman Letter, Dennis Gartman, gold on balance in U.S. dollar and Japanese yen terms has fared poorly this past year. However, in euro terms, gold has fared ‘reasonably well.’

“That is, it held its value almost perfectly over the course of the year,” he told Kitco News in a phone interview Tuesday.

According to Kitco-Currency Charts, spot gold in both dollar and yen terms have lost almost 10%, while spot gold in euro terms is virtually unchanged over the last year. However, as central bank policies, particularly in Europe and Japan, look to devalue their respective currencies, gold prices stand to gain next year. 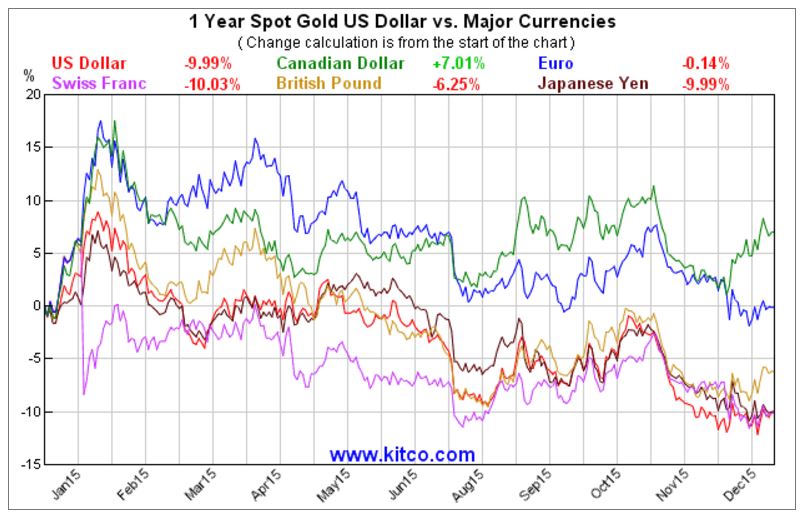 “I had a chat with a European investment adviser today, who held 10% of his client assets in gold, the rest in USD cash. His clients are happy...” Merk told Kitco News Tuesday. “In Euros, gold is flat. The diversification has worked. For anyone in emerging markets, investing in gold has been great,” he added.

There are investors in emerging markets, Merk continued, that owned gold this year and are, as he put it, ‘smiling now.’

Gartman shared Merk’s view noting that if investors could gold hold in peripheral currencies like the Russian ruble, they would have gained significantly more.

Based on Kitco’s currency charts, gold in Russian ruble terms as well as South African Rand terms have fared best over the last year, posting gains of more than 17% and 19%, respectively.

“I think the currency that’s going to continue to be the weakest is probably going to be the Russian Ruble,” Gartman said. “I would like to price gold in ruble terms [and] I wouldn’t mind pricing gold in Chinese renminbi terms but those are hard to do. Professional traders can do it but the public can’t.”

Gartman was the driving force in the creation of exchange-traded funds aimed at allowing investors to gain exposure to gold against different currencies, including the euro, British pound and Japanese yen. AdvisorShares, a sponsor of actively managed ETFs, launched the products, which carry Gartman’s name, in 2014 and are now actively trading on the NYSE Arca.

The real culprit behind gold’s weakness has been the strengthening U.S. dollar, and according to Gartman, it may have much more upside potential in the coming year given the Federal Reserve’s recent move to normalize rates.

“I think that the dollar has, in baseball terms, probably made it to the 5th inning of a 9th-inning baseball game,” he said, adding that given current central bank policies globally, the euro and the yen have to weaken.

“If you’re an owner of gold, my response to you is why you would use a currency that is rising in value to buy gold when you can use currencies that are declining in value to do the same thing,” he questioned. “You should be funding your gold positions not with dollars, but with Euros and yen.

It has no choice but to rise in yen and euro,” he added.

Richard Baker, editor of the Eureka Mining Report, also focused his attention on the U.S. dollar and said that if the greenback were to stabilize next year, and reverse its uptrend, gold has a chance to stay above $1,000 an ounce.

The issue with gold right now, according to Merk, is investor disinterest since it costs to hold it and doesn’t pay a dividend. However, he said that it remains an important diversifier to protect against government policies that could hurt people’s investments.

“Ultimately what happens in many of these countries: investors don't realize that the interests of governments in debt are not aligned with that of their citizens,” Merk said. The answer to why it is important to gold gold, Merk continued, “in my honest opinion, is that gold doesn't change, but everything around it does.”