SURVEY SAYS: Gold & Silver To Outperform Rest of Metals In 2016, Silver To Shine Most

(Kitco News) - As markets conclude the first trading week of the year, and digest much of the prices action and volatility that took place, Kitco News looks to wind down its Outlook coverage by tabulating results of its last 2016 readers’ survey.

Upon launching its Outlook 2016 Series – themed 2016: A Game Changer? – Kitco News asked readers which metal they expect to perform best this year, and to much avail, the majority seems to be right so far.

When asked between gold, silver, platinum, palladium and copper, which metal would outperform, Kitco readers voted, with a strong majority, on both gold and silver; the latter expected to be the winner in 2016. 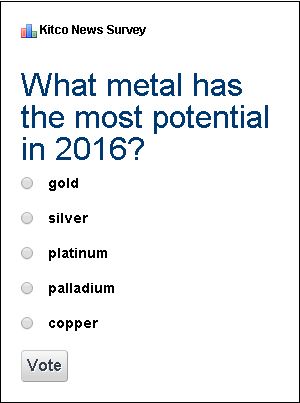 February comex gold futures managed to rally to a two-month high earlier in the week and are on track to close more than 3% higher. Meanwhile, although March silver futures are back down Friday, they managed to hit a two-week high of $14.385 an ounce and are almost 1% higher on the week.  Gold was last quoted down $9.70 at 1098.10 an ounce and silver was last down 42 cents at 13.920 an ounce.

If this week is deemed as a precursor on price action for the rest of the year, palladium’s outlook seems most bleak. March palladium futures lost over 12% on the week and are on track for a fifth consecutive negative close. Likewise, March high-grade copper futures are more than 2.5% lower on the week and managed to hit a low of $1.9925 a pound, a level last seen in 2009.

Kitco readers may be onto something though -- as they root for silver -- and as one research firm released a report Friday that mirrored this idea.

U.K.-based Capital Economics said that they remain most optimistic on silver for 2016 and even expect the metal to slightly outperform gold.  The analysts are calling for a year-end price of $16.50/oz for silver, more than 17% higher from current levels.