Despite Support, No Political Will In Republican Party To Create A Gold Standard – Analysts

(Kitco News) - Although there has been early support from some Republican candidates to put the U.S. monetary policy back on the gold standard, many analysts say there isn’t the political will to make this a major issue during the 2016 election.

Monday, Iowans cast their vote in the first primary election to nominate their candidate to run for President late in the year. The Republican field is fairly wide with 12 candidates on the ticket in Iowa. Of the 12 candidates, the idea of moving back to a gold standard has been supported by five;, Senator Ted Cruz, Senator Rand Paul, Dr. Ben Carson, Arkansas Governor Mike Huckabee and New Jersey Governor Chris Christie.

Second place in the polls, Cruz has been the most vocal noting, during the October Republican presidential debate, that the Fed should be focused on “sound money and monetary stability, ideally tied to gold.”

In the same debate, Huckabee said that the dwindling middleclass is the result of the U.S Fed “manipulating” the dollar. “What we need to do is to make sure that they tie the monetary standard to something that makes sense, rather than to their own whims,” he said.

Christie raised concerns about the impact the Fed’s extraordinary money printing will have on the economy while Carson has noted that the value of the U.S. dollar is based on nothing.

Paul has been a long-time supporter of changing the current U.S. monetary policy. In an interview with Kitco News, in 2013, Paul said that he would like to establish a commission to study the possibility of establishing a new gold standard. Paul also introduced a bill to audit the Fed, which the senate rejected at the start of the year. His father, Rep. Ron Paul and also a former presidential candidate was a big advocate of returning to a gold standard.

However, since the October debate, candidates have been fairly mum on adopting the controversial monetary policy as many economists have lambasted the suggestions. In December the L.A. Times published a commentary by Michael Hiltzik who said it was the worst idea in the debate. 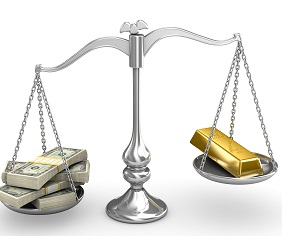 Even some economists who support the idea of adopting a new gold standard don’t see it happening any time soon.

Keith Weiner, president of the Gold Standard Institute USA, and CEO of Monetary Metals said that a gold standard would help to create stable interest rates and financial system, which would promote economic growth. However he added that the political reality does not support a shift in the current monetary system, he said.

He explained that loose monetary policies is helping to promote higher equity markets, creating the illusion of wealth. Nobody in any political party wants to change the system “taking away the punch bowl,” Weiner said.

“I don’t think the gold standard will be a major election issue this year,” Weiner said. “But I don’t think the idea is going away. This will only become a bigger and bigger issue as people have started to see the long-term impact of aggressive money printing.”

Mark Skousen, author of Economics of a Pure Gold Standard, agreed he doesn’t expect the topic of a gold standard to be very popular this year as flexible monetary policies will be needed to fight deflationary forces in the economy. Skousen also questioned the stability of a gold standard as the market has become a lot more volatile.

“Commodity prices are inherently unstable,” he said. “They are subject to boom and bust cycles.”

He explained that gold’s historic role has been a hedge against rising inflation, but that isn’t a factor at the moment as inflation pressures remains weak as a result of lower energy prices.

Instead of implementing a gold standard, one idea that Skousen suggested was to have a gold target, not an actual gold standard. He explained that along with having an employment target and an inflation target, the Fed can promote currency stability with a gold target, adjusting their policy to trade within a band against gold or silver.

Although the idea of returning to a gold standard could ultimately be a pipedream, the topic is expected to crop up during the election campaign. Jeffrey Christian, managing director of New York- based CPM Group, said that he could see the proposal of reestablishing a gold standard make it into the Republican party’s official platform, similar to the proposal that was included in its 2012 platform. But he also said that doesn’t see the discussion going much further than being an idea on paper.

Christian added that there are a lot of misconceptions about a gold standard and that history actually shows that there were major financial crisis during periods of established gold standards. He explained that the biggest problem with tying your monetary policy to a fixed asset is that it is not flexible enough to withstand periods of high volatility.

“There is this nostalgia for a gold standard that has never really existed,” he said. “History showed that you had this rigid monetary policy until it broke and then the government had to intervene.”

Christian added that when fixing monetary policy to a fixed asset, if the politicians get it wrong, it can create major deflation on one side or high inflation on the other.

Christian explained that former Fed Chair Allen Greenspan used to talk about gold in his Humphry Hawkins testimony before Congress but it was always in relation to the health of financial markets.

“The only way gold can be a good barometer is if it is allowed to move freely in the marketplace. When you tie your monetary policy to a fixed asset it distorts the price.”

Artigas explained that a country backing its currency with gold helps to balance the “fiat risk.”

Nov 30 Inflation is here to stay no matter what the Fed says or does - Murenbeeld & Co.
Nov 29 Investors should diversify away from bonds in 2022, hold 10% in commodities, including gold - WisdomTree
Nov 26 COVID Fears, wage inflation will support prices next week
Nov 25 Black Friday sales to reach record highs, gold remains a popular gift
Nov 25 There is enough money in the system to resolve the global supply crunch gold to remain stuck in neutral - USBWM