(Kitco News) - While traditional wisdom concludes that gold is historically a hedge against inflation, one Canadian bank also sees potential for the yellow metal in a deflationary environment -- a scenario that seems more likely.

Jessica Fung, commodity analyst at BMO Capital Markets, said in an interview with Kitco News that deflationary fears -- currency debasement - - could be a small factor behind the latest rally in the yellow metal.

Monday, the U.S. Commerce Department reported weaker-than-expected inflation in the last month of 2015 as energy prices continued to decline. The Federal Reserve’s preferred inflation measure, the Personal Consumption Expenditure (PCE) Index, rose 0.6% from 2014; at the same time the core PCE index, which strips out volatile food and energy prices, rose 1.4% from the previous year, well below the central bank’s inflation target of 2%.

Despite the weak inflation pressures, the gold market has started 2016 on a strong note and continues to build momentum, hitting a three-month high Tuesday, despite the fact that inflation in the U.S. and around the world is almost nonexistent. April Comex gold futures last traded at $1,127 an ounce, relatively flat on the day.

Fung said the latest inflation data helping to add to the deflationary fears. Although there is little historical data on gold’s performance in a deflationary environment, Fung said that Japan’s economy could provide a hint for the global gold market. 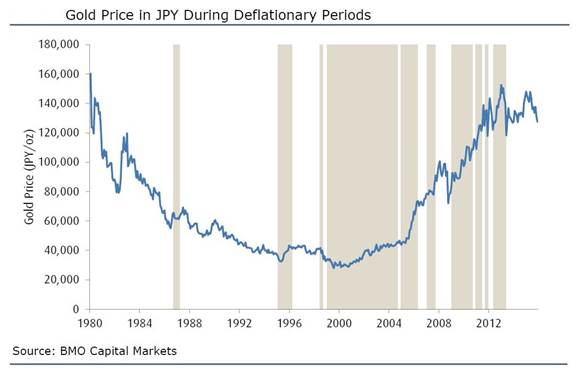 “We note that gold prices in JPY did improve during deflationary periods, but this was a function of the currency weakening relative to the U.S. dollar,” she said in her analysis. “Thus the impact on [U.S. dollar] gold prices if we were to experience global deflation is unprecedented, though we suspect it could be supportive.”

She explained that in a weak U.S. dollar environment, she would expect investors to turn to gold as a store of wealth.

“From an asset allocation perspective, gold investment is strongest when even the dollar and Treasuries as safe-haven investments are unattractive,” she added.

Although deflationary fears could, in part, be behind gold’s recent outperformance, Fung said that she suspects most of the momentum is coming from safe-haven demand as a result of renewed concerns on global economic growth.

In this environment, the yellow metal has room to move higher, but Fung explained that -- similar to last year -- as economic concerns abate, demand for gold should start to fall.

“[Safe-haven demand] is not a driver for significant price upside, but it prevents the downside, which we believe is the natural direction for gold prices when global economic growth is puttering along,” she said.