Gold Has Room To Move Higher But Analysts Warn To Be Careful Around $1,180 Level

(Kitco News) - Gold pushing above a key technical barrier Wednesday indicates that the market has room to move higher in the near-term, but some analysts warn investors to still careful because this rally could run out of steam.

After a disappointing 2015, sentiment has quickly shifted with investors seeing gold in a more positive light as equities, bond yields and the U.S. dollar weaken. That positive outlook got a strong boost Wednesday as prices pushed above the 200-day moving average; this is the first time this technical barrier has been broken since October. As of 12:36 p.m. EST, April gold was trading at 1,140 an ounce, up more than 1% on the day.

Bart Melek, head of commodity strategy at TD Securities, said investors are concerned that cracks are starting to show in the U.S. economy, which lowers expectations for Federal Reserve rate hikes this year. He added there is enough technical momentum to help drive prices to $1,150 an ounce or even as high as $1,180 an ounce in the near-term. 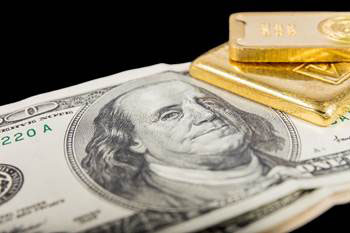 Although TDS forecasts gold to ultimately hit $1,200 an ounce in 2016, Melek continued, he warned that it could still be a bumpy ride.

“I think a lot of ambiguity over Fed rate hikes this year still has to go away and I think once that happens we will see a reversal in the U.S. dollar, which is good for gold,” he said.

Phillip Streible, senior market strategist at RJOFutures, agreed that he sees $1,150 as a near-term target, but added that he is seeing a longer-term shift in the marketplace. By his count, 13 countries now have negative yields on their two-year government bonds.

“People are now willing to pay governments to hold their money and that is destroying wealth,” he said.

He added that in the current environment, investors are turning back to gold to reserve their capital. He added that with interest rates falling into negative territory around the world, it will soon be clear that the Fed will not be able to hike rates as much as it had anticipated in December.

“With the U.S. dollar, the Fed can’t afford to get too far away from what other central banks are doing,” he said. “This is just the start of the ride for gold.”

However, not all analysts are convinced that gold will continue to push higher for the rest of the year. Some still see 2015 as a good example in terms of how quickly rallies can fade in the gold market. Gold rallied 8% in the first three weeks last year, but then gave back all the gains, hitting new multi-year lows in March.

In a recent interview with Kitco News, Darin Newsom, senior analyst at Telvent DTN, said that despite the short-term potential, it is difficult to get excited about gold in the long-term until prices push above at least the October highs at $1191.70 an ounce.

Bill Baruch, senior commodity broker at iiTrader, is also looking for further short-term gains but added that people should have been in the yellow metal since before January 1. He added that the market is looking a little pricey at current levels.

“I think we could see prices hit $1,180 as investors jump in and start to chase the market. But you really want to be out when everyone is jumping in,” he said.

Baruch added that there is as much potential for gold prices to push above $1,200 an ounce in the long-term as there is for further volatility and another selloff.

In a report published Monday, Commodity analyst at Capital Economics noted that some lingering optimism in the market could be a threat to gold’s latest rally. There are expectations that Friday’s employment report, that shows employment growth above 200,000 would be negative for gold.

Currently, Capital Economics is forecasting job gains of 210,000 for January, above consensus estimates at 192,000.

“The recovery in the gold price sits comfortably with our positive medium-term outlook on the precious metal. Some renewed weakness is likely if (as we anticipate) fears over the global economy prove to be overdone and the markets start to price in further Fed tightening again,” the analysts said. “And in the meantime, gold’s recent resilience has reminded investors worldwide of its appeal as a safe haven.”