(Kitco News) - Although some banks have shifted their outlook on gold, as global market uncertainty propelled prices up more than 17.5% on the year, one bank remains firm that prices will move lower.

In an interview with Kitco News, Harry Tchilinguirian, global head of commodity markets strategy at BNP Paribas, said that the bank is in no hurry to change its forecast and there is still a possibility for gold to drop below $1,000 an ounce. 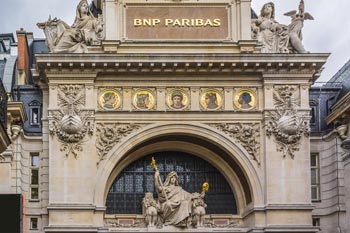 In January, the firm said that it expects gold prices to average $980 an ounce this year and $860 in 2017; and, Tchilinguirian said that fundamentally nothing has changed.

In fact, the latest rally has made selling out of the money call options -- the bank’s preferred way to take advantage of a weaker gold market -- a lot more compelling, he added.

“Yes we’ve seen a rally in gold, which is something we were expecting, but the longer-term trend is still down,” he said. “In our last report, we warned about a rally in the near-term. The price overshot our target at $1,150 but we don’t think it has room to move much further.”

Tchilinguirian explained that the influences that pushed gold to a one-year high at the start of the month -- safe-haven demand and  falling expectations of Federal Reserve interest rate hikes -- are starting to dwindle in the marketplace.

“We expected to see a rally in gold tied to risk aversion related to weakness in the Chinese economy. But if I look at what is happening now in China -- expectations of yuan devaluation have subsided considerably and the Shanghai stock index has rebounded from its lows in January. A lot of the pressures that drove gold higher are now coming off,” he said.

At the same time, the Fed’s inactivity on interest rates will also have less impact on gold as this scenario is already fully priced into the market, he said.

“Reversing course right now is not an option because the Fed will want to hold on to its ammunition if the economic outlook deteriorates,” he said.

A widening divergence between the Federal Reserve and other central banks monetary policies should be U.S. dollar supportive and gold negative, he explained. Although the Fed is on hold, other central banks are expected to continue to aggressively ease. Tchilinguirian added the current risk for the market is if the Fed manages to squeeze in one more rate hike later in the year, creating an even steeper selloff in the gold price.

Not only are the factors behind the latest rally subsiding but the influences needed for a sustainable rally aren’t materializing, Tchilinguirian said.

“We need an inflationary environment, we need other prices of commodities -- in particular oil -- to go up and we need economic growth. These factor are not present. Some people are even looking for a slowdown in the U.S.,” he said.

In this environment, Tchilinguirian said the bank’s favorite gold trade remains selling out of the money calls; specifically, he cited June calls with a $1,300 or even $1,350 strike as an attractive trade. The $1,300 call, currently trading around $32 an ounce, could be fairly profitable if the contract expires before that price target is reached, he said.

Feb 1 This is the big 2023 shocker that will get gold price to record highs this year - Goehring & Rozencwajg
Dec 15 Buying opportunity for gold is this December and early 2023, says RBC
Nov 29 Gold price can still drop to $1,300 as investors exit 'underwater' ETF trades into year-end
Nov 18 Embrace decentralization to escape "central bank Stockholm syndrome" - Nick Spanos
Nov 17 'Unhealthy' - John Feneck doesn't see much support for the market's big move up in November