(Kitco News) - Although gold’s momentous run seemed capped once again by U.S. dollar strength, the metal continues to trade in the green so far this year.

And one Vancouver-based research firm still says there’s a bullish case for gold this year.

“There will be headwinds this year, of course. But we think our list of bullish factors in the outlook, including the inevitable roll-over of the U.S. dollar, will dominate gold price developments going forward.” 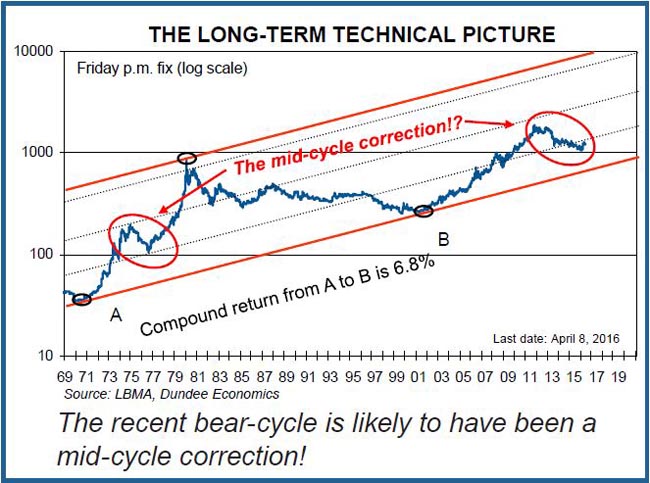 Murenbeeld also cited a recent World Gold Council gold report that also suggested the market has seen a momentum shift. “The sharp rise in the gold price in Q1, along with the massive demand for ETF gold and the adoption of negative interest rates in some quarters, allowed the authors to suggest that a new bull cycle may have commenced,” he said.

A major contributor to gold’s weakness has been the anticipation of a rise in U.S. interest rates; however, the economist noted that recent Federal Open Market Committee minutes suggest the central bank may hold off a little longer.

"[The minutes] reflect an attitude we share: why rush raising rates when it is relatively easy to arrest inflation when it finally appears. Ergo, we think the Fed will continue with its policy of ‘lower for longer,’” he noted.

Looking at gold’s technical side, Murenbeeld shared his analysis of former bear-cycles to the metal’s most recent.

“The recent bear-cycle turned out to be more protracted than the 1975-76 correction; accordingly, a change in semantics from ‘correction’ to ‘bear-cycle’ might be in order,” he said. “Either way however, we believe the bear-cycle is/was only an ‘interruption’ in a very long gold bull market. The inexorable rise in global debt, if nothing else, will prove us right.”

However, despite the optimistic outlook, Murenbeeld said there is still a chance for prices to fall back from here.

“We would like to see gold to break through $1296 before declaring a breakout of the bear-cycle,” he said. “The high level of the net-long ‘spec’ position continues to suggest a pull-back in the gold price is possible.”

Gold prices are seeing some weakness Wednesday with June Comex gold futures last down $13.40 at $1,247.70 an ounce.