Technically, the daily chart shows Comex June gold futures consolidating within a large symmetrical triangle pattern. In technical lingo, triangles are a bullish continuation pattern. The formation offers gold bulls a chance to rest up and regain their strength for the next rally wave following the strong move higher in the first quarter.

Here's how triangles work: Triangles patterns are generally continuation patterns, which means a topside breakout will trigger a resumption of the previous trend move (in this case a rising trend). Triangles need to confirm before they reach their "apex" point. A sustained rally and close above the triangle resistance point will confirm an upside breakout. Conservative technical traders can also wait for a rally and close above the triangle top at $1,287.80. 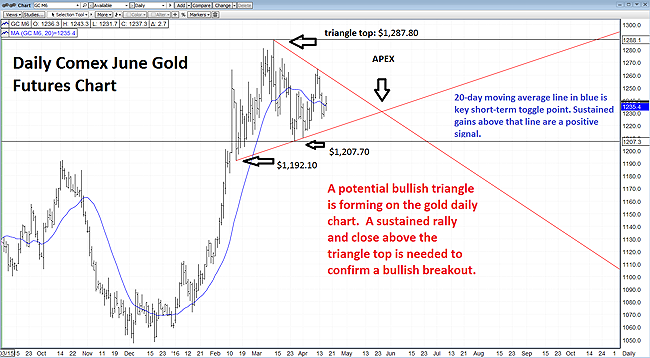 Triangles offer technical traders a so-called "measured move" objective. That can be calculated by measuring the width of the triangle (at its widest point) and applying that to the breakout point. Get ready: A sustained and confirmed upside breakout would open the door for a strong new rally wave in the gold market.

In the very short-term, gold bulls are testing 20-day moving average resistance and sustained gains above that line would be a positive signal.

Bottom line: Beware of choppy, trendless conditions within the triangle. Swing traders and long-term traders may want to move to the sidelines until the triangle resolves.