As of 9:55 a.m. EDT, the ratio of spot gold to silver had fallen to around 74. This is the lowest level since October, pointed out Robin Bhar, metals analyst with Société Générale. 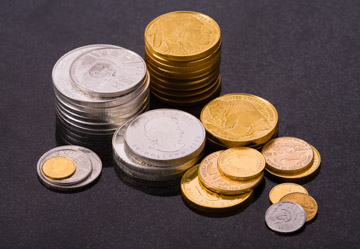 The ratio measures how many ounces of silver it takes to buy an ounce of gold, with a smaller number signaling silver outperforming, and vice-versa. Comex June gold was up 1.7% to $1,256.20 an ounce, while most-active May silver raced ahead for even-higher percentage gain, adding 4.4% to $16.975 an ounce. The silver contract peaked at $17.11, its most muscular level since late last May.

“Prices were lent buoyancy by a weaker U.S. dollar and rising oil prices, as this reduces the fears of a further decline in inflation expectations,” said a research note from Commerzbank.

Still, there are factors helping out silver even more, said Bhar in an interview with Kitco News. Until the last week or so, silver had lagged the rally in gold so far in 2016.

“So, there is an element of catch-up,” Bhar said. “Customers and investors were probably looking at precious metals and seeing the underperformance of silver, thinking the factors driving gold should be driving silver to some extent.”

Silver, of course, is far cheaper per ounce than gold.

“So if you’re bullish about gold, ‘don’t buy gold; buy more silver’ would be the reaction of the market,” he explained.

Meanwhile, there has been some stabilization of economic data in key commodity-consuming nation China, Bhar pointed out. This helps a commodity such as silver, which has far more industrial demand than gold.

“There’s been some fiscal stimulus from the Chinese government targeting the infrastructure and industrial sectors to prevent them from a hard landing. That has helped to revive silver,” Bhar said.

“Our underlying view is that this is not sustainable, but at this point you ‘can’t fight the five-year plan,’” BMO said. “We note that silver prices started rising at the beginning of last week, in line with the base metals’ price moves ‘in sympathy’ with oil prices ahead of the Doha meeting this past weekend.”

Bart Melek, head of commodity research at TD Securities, pointed out that futures speculators in silver have been increasing their long holdings aggressively, as reflected in the most recent data from the Commodity Futures Trading Commission. In the week to April 12, the net-long, or bullish, position among money managers in the CFTC’s “disaggregated” report jumped roughly 30% to 56,018 contracts. Further, Melek pointed out that the number of gross longs held by non-commercials in the CFTC’s “legacy” report climbed to 86,886, the highest level since March 2004.

Also, Melek continued, global exchange-traded-fund purchases of silver are up some 47% since early February.

“The twice-as-volatile silver should have outperformed gold when the Fed's move towards dovish signaling helped to rally gold,” TDS says. “If the precious metals sentiment continues to improve, silver could still see some upside, but it will be limited by technicals and the outsized long positioning.”