BYD - changing the game for lithium and cobalt?

Tremendous success of Tesla’s Model 3 pre-sale rekindled a hype around electric cars last month, leading to higher prices and concerns for lithium, but there is another metal investors should keep an eye on.

Cobalt, remains even more of a question mark, one that perhaps not enough market participants fully recognize as of yet. While Tesla captivated the media with several hundreds of thousands of preorders for their lithium-cobalt battery-based Model 3.

But a Chinese manufacturer could potentially make the metal obsolete, producing a large numbers of EVs, based on a cobalt-free technology.

Tech Metals Insider spoke with Micheal Austin, VP of BYD USA, about his views of the battery material market. 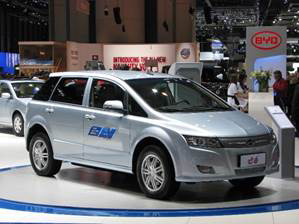 BYD (“Build Your Dream”) is among China’s largest domestic car producers. It is also the only car company currently manufacturing its own batteries in-house. About 50% of BYD’s $12B revenue is from cars, the other half is from battery and photovoltaics products and several other activities. BYD’s battery plant has a capacity of 11GWh, scheduled to grow by 3-6GWh annually in future. (For comparison: Tesla’s new “Gigafactory” is estimated to have a capacity of 35GWh once fully scaled).

The difference? Lithium-iron phosphate technology. Austin explained: “Our batteries contain some lithium but no cobalt. There is plenty of lithium in the world; what manufacturers will struggle with is price volatility in cobalt. Cobalt is mostly from Congo, and there isn’t enough of it. That’s why you see large manufacturers like GM move away from lithium-cobalt and look into lithium-iron phosphate systems”.

“Other than conventional Li-ion batteries, our electrolyte is non-toxic”, he added. “It is a disposable system so it doesn’t become a landfill nightmare at the end of its life cycle”. The batteries will also last for 10,000 charging cycles compared to about 3,000 for lithium-cobalt providing much longer product life cycles.

Iron-phosphate batteries are also non-explosive. When exposed to flames the batteries do not rapidly disassemble. “We call that fire safe. If you can put your battery directly into flames for several hours and not create a danger to emergency personnel, then that’s a good situation”, Austin is proud to add. BYD holds more than 1,700 patents on this technology alone, and no other manufacturer has yet come up with technologies of similar performance.

The downside? Energy density. BYD batteries are about 10% bigger and heavier compared to other systems. To BYD, the upsides outweigh this issue by far.

So why are we not seeing BYD electric vehicles in showrooms? “Our focus outside of China will remain on high utility applications”, explained Austin. Their E6 “workhorse” sedan is used by taxi fleets in places like London (200), Chicago (20), New York City (50) and several other cities around the world. The E6 has a city range of about 240 miles on a single charge using an 80kWh battery. BYD operates a manufacturing plant in Lancaster, CA, for all-electric buses of different sizes.

“Replacing a diesel bus with an electric one is the same as replacing 33 passenger cars. You are saving fuel and maintenance on top of the environmental impact. Our ambition is not to chase the U.S. consumer market. BYD products in China are extremely attractive. With only 6% of the Chinese population owning a car, the country has a huge domestic potential,” he said.

Consequently, BYD sedans will remain a rare sight in large parts of the world. Iron-phosphate batteries, however, appear to be a very desirable alternative to lithium-cobalt to prevent short and medium-term cobalt shortages and amplitudes in price while increasing battery safety. With other producers being firmly set on lithium-cobalt, will it be enough to prevent a cobalt shortage?