This Chart Shows That Trump-mania May Actually Be Helping Gold

(Kitco News) - If you crunch the numbers, it would suggest that as Donald Trump’s popularity grows, so does the price of gold.

Is the Donald really helping gold?

Looking at the chart, which compares gold futures prices with Trump’s primary results, both lines are moving in tandem.

Hawaiian-based technical analyst, Gary Wagner noted that there is “somewhat” of a correlation, mirroring Wyckoff’s thoughts that Trump’s lead has added “more volatility in the gold market.” 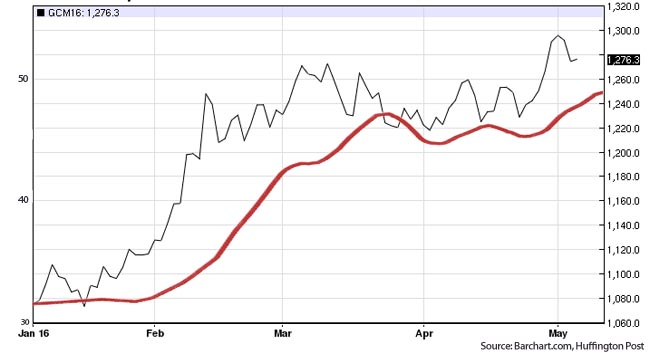 By default, Trump has now become the GOP’s nominee as Sen. Ted Cruz and Gov. John Kasich have both dropped out of the race earlier in the week.

Veteran trader Todd “Bubba” Horwitz doesn’t see the causal link between the real estate mogul’s popularity among voters and gold’s upswing this year; although, he does think a Trump presidency would be helpful to the metal.

“Gold is higher because the Fed and central banks have lost their minds,” Horwitz argued. “The NIRP is what’s really driving gold – the fear of the fiat currency collapse and the fear that central banks and the Fed are lost.”

But still, Horwitz sees the Donald offering some help to the gold market. “A Trump presidency would be good for gold because it will open the markets up, free up regulation and be friendlier to gold,” he said.

One analyst pointed to democratic candidate Bernie Sanders to explain gold’s run-up. According to Frank Holmes, CEO of U.S. Global Investors, when Sanders started beating opponent Hillary Clinton at earlier on during the primaries, some investors flocked to gold.

“That’s what I heard from a lot of people,” he said, adding that they feared how Sanders would ultimately affect the U.S. dollar.

In terms of Trump, Holmes doesn’t see a correlation. “It doesn’t have to do with Trump, it has to do with negative interest rates and Yellen.”

Unlike Horwitz, Holmes said that he actually sees the Donald hurting gold down the line “because of how he will run the budget.”

“Donald Trump is a liberal republican or a conservative democrat,” Holmes said.